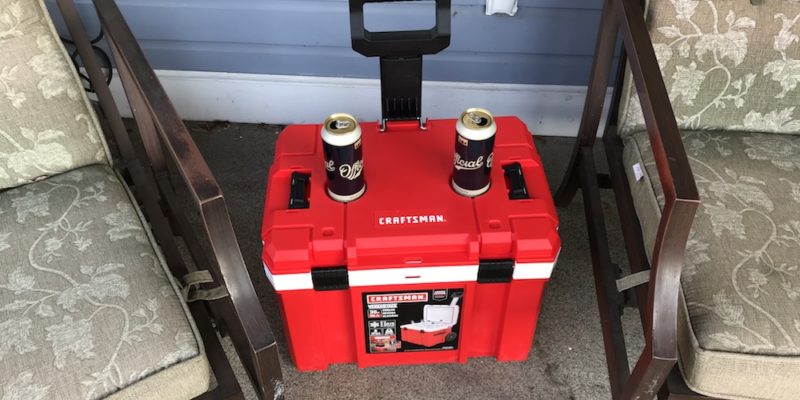 Part of the daily fun on most job sites is schlepping in all the tools you’ll need for the day. Normally, that involves several power tools, of varying size and weight, but few of which could be described as “lightweight.” The other daily necessity is sustenance. Most of us would like a meal at some point during the work day, and several cold drinks to stay hydrated, especially during the hot summer months. We recently received a product to evaluate that promises to help you schlep those tools and keep stuff cool. Join us as we peek under the lid of the new Craftsman Versastack Cooler.

Along with a mechanic’s wrench set (which we’ll be reviewing soon) and a 17” tool bag, the Craftsman Versastack Cooler is the latest addition to Craftsman’s Versastack product line. The Versastack lineup includes an assortment of toolboxes and tool sets designed to stack and interlock with one another. Having a wheeled box with an extendable handle for the base is a very handy way to schlep several of these interlocking items at once. And if that wheeled box is full of tasty victuals and cold beverages, all the better. Here’s the official list of features and specs for the Craftsman Versastack Cooler:

Rolling Through The Features On The Craftsman Versastack Cooler

When I first saw the Craftsman Versastack Cooler, I thought it was a rolling toolbox. As it happens, Craftsman makes a 20″ rolling toolbox that’s very similar in size and appearance. On closer inspection, I quickly realized my error, my first clue being the label reading “Craftsman Versastack Cooler” and the picture of several bottles of water resting on a bed of ice. Can’t fool me for long!

Naturally, the first thing I had to do was to extend the handle. That process is easy and intuitive: simply press the red button, and the handle pulls right up and locks. To collapse it, push the button again and push down. Easy freezy.

To keep the cool in, Craftsman made the walls nice and thick on the Craftsman Versastack Cooler. The lid is also thick, and has a neoprene seal running around the underside, for a nice tight seal. The cooler’s IP54 rating means that while it keeps the cool in, it’s also keeping dust and rain out. When the lid is closed, two latches on the front keep it very securely latched.

Getting a grip on the Craftsman Versastack Cooler is easy. Its handle has a big, comfortable opening, with plenty of room to grab on. There are also grab bars built into each side, in case there’s a buddy available to share the load. If not, comfortable recesses just above the handles make it easy to do a solo lift.

Helping to keep those uplifting moments to a minimum, the telescoping handle works smoothly, and makes a much better option for transporting the cooler from point A to point B(everage). The 7” wheels roll smoothly, indoors and out, and even work well when navigating stairs. I never had a cooler with wheels before; I’ll never buy another one without them. I’m teachable.

Two recesses in the top of the lid are designed to serve as cup holders. At only about ½” deep, they’ll be useful for keeping a drink from sliding around, but won’t provide much in the way of tip-over protection.

Rolling capacity for the Craftsman Versastack Cooler is listed at 110 lbs., which should be adequate for a full cooler with a toolbox or two riding along. When it’s stationary, the solid construction makes it usable as a handy spare seat, even for those in the “Clydesdale” weight class, such as myself. Just be prepared to be dethroned periodically when your thirsty friends need a refill.

Keeping Your Cool With The Craftsman Versastack Cooler

The specs for the Craftsman Versastack Cooler tout its ability to retain ice for up to three days. Those specs come with an asterisk, though; as with any cooler, the actual time will vary with conditions. A cooler sitting in the sun in your back yard in Phoenix in July is going to lose its cool a bit faster than a cooler in my basement in Pittsburgh during a mid-winter power outage. Not that THAT ever happens.

We can’t test it under all conditions, but I did want to see how well it would retain ice under normal-ish conditions. I filled the cooler with beverages, dumped a bucket of ice over it, and closed ‘er up. So I could keep a close eye on it, I stationed it near the couch in the family room, where the temperature ranges from 60° at night to 67° during the day.

By the way, here’s a rough measure of capacity, for anyone interested: I loaded the cooler up with 12 bottles of beer and 22 cans of beer and pop. Everything fit nicely upright, and the cans were a mix of 12 oz. and 16 ouncers. The Craftsman Versastack Cooler is able to hold a full case of 12 oz. bottles, or up to 48 12-oz. cans, with room left for a layer of ice to keep it chilled.

When I filled the cooler, some of the beverages were cold, and some were at room temperature. The cooler was opened periodically, for ice inspection. Some removal of beverages may also have occurred, for evaluation purposes. This also gave me an excuse to test out the built-in bottle opener.

On day two, there was still about half of the ice remaining. The evening’s test beverages were nice and cold. When I cracked the lid on day three, one little ice cube remained, floating amongst the bottles. More importantly, everything was still nice and cold inside. My little bin full of icemaker ice cubes had kept everything nice and chilled; a full 10 lb. bag from the store would likely have lasted a fair bit longer. Now I just had to drain out the accumulated water, which brings up my only quibble with the cooler: I wish there was a drain at the bottom.

After using the Craftsman Versastack Cooler for a couple of weeks, I’m a fan. We split our time between our home in Pittsburgh and an old farmhouse we’re renovating south of Erie. We always have cold “stuff” to transport, and the cooler is just the right size to accommodate everything we normally need, plus two or three ice packs.

We occasionally head up to the Buffalo, NY area, to visit my Mom and a sibling or two in the area. A highlight of some of these road trips is getting together with one of my brothers, to exchange tasty IPAs. Using the Craftsman Versastack Cooler will enable us to get right down to business on the deck when I arrive. It will also be the perfect size for road trips to GA, since my wife insists we need to bring food to our daughter’s (apparently there are no grocery stores in Augusta). I also foresee it getting a workout at picnics, family reunions, outdoor concerts and the like.

With its Versastack credentials, the Craftsman Versastack Cooler would be a good addition for anyone invested in Craftsman tools. The ability to roll up to the job site with up to 110 lbs. of tools on top sure beats schlepping them in by hand. I’m looking forward to using it on my projects, for tool schleppage, and to keep water nice and cold and convenient, so my helpers have no excuse to run off looking for a cold drink.

To make sure you’ll be chillin’ for a good long while, Craftsman backs the cooler with a limited lifetime warranty. If you want to keep stuff cool and haul some tools, check out the Craftsman Versastack Cooler at your local Lowe’s.