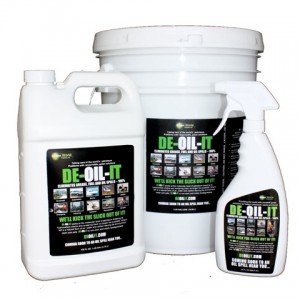 I know that a biodegradable degreaser, even one with as neat of a name as De-Oil-It, might not sound all that exciting to you but to me it’s as cool as Miles Davis. You see, my alter ego is an environmental scientist. For the past five years I have worked on one project and one project alone, Advanced Anaerobic Bioremediation or AAB. I know it sounds like something, but for the most part I drive a forklift and sometimes take samples. What we do is work with naturally occurring bacteria, on an Air Base, which will remain nameless, to breakdown chlorinated engine degreasers. The degreasers were used in the engine shops and motor pools to clean those pesky hard to reach spots. Unfortunately, like most places that these carcinogenic chlorinated solvents were used, they were mishandled and large amounts leached into the ground. These solvents, TCE and PCE, rank number 2 and 3 on a list of the most common groundwater contaminants at contamination sites, very comforting isn’t it? So when I hear tale of a degreaser that is biodegradable and doesn’t cause a list of serious problems in and of itself, I get excited.

So, what is it reported to do and why should you be excited about it as well? Well for starters, a major problem with hydrocarbon spills, like oil and gasoline, is that they can kill beneficial bacteria, which might be able to break them down. There are a few cases that are exceptions to that rule; think back to the BP oil spill in the gulf and how they used bacteria to break the oil down. However, for the most part what oil touches it harms. Please understand I love the multiple uses of oil and have no problem with it, but just like fire if it gets out of control it can have serious adverse effects. Plus oil is hydrophobic, which mean that it doesn’t mix with water. In other words, if you want to clean it off of a part or an engine you need to use a solvent. There are many different solvents out there from soap, to acetone, to TCE, and they work very well, but they too can have adverse effects.

That is where De-Oil-It differs. First, it is a degreaser and can be used to remove oil from parts, engines or structures. However, not only can it remove the oil but it also degrades it so that it is not toxic to naturally occurring bacteria, which can break it down to products like CO2 and H2O. Unlike other degreasers and spill cleanup materials De-Oil-It breaks down naturally as well, leaving nothing to clean up and no hazardous degreaser/oil/absorbent slurry to deal with.

Sure, that sounds great for cleanup crews and mechanics, but what does that do for homeowners and tradesmen? Well, besides cleaning parts for stuff like lawnmowers or cars, De-Oil-it can be used to clean up spills that occur when you’re filling your lawnmower or changing your oil. In addition, if you have oil stains in your driveway De-Oil-It can be used to breakdown the stain and remove it, returning your driveway back to its original, oil-slick-free state.

will run you about $20 USD from Amazon, which may seem a little steep for a bottle that size. But, compared to some of the enzymatic and bacterial cleaners I’ve used, it’s a pretty good price. Check it out, and you might find it ideal to clean your pit station.