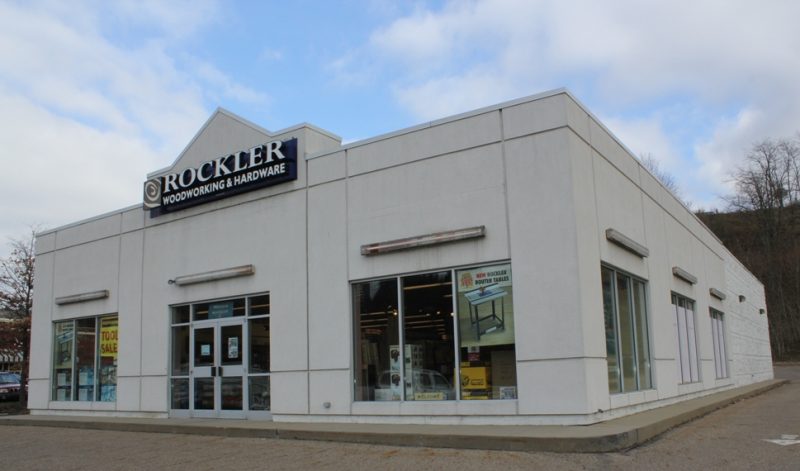 There’s a six-lane road north of where I live, outside of Pittsburgh, aptly nicknamed McNightmare Road by the locals. Its real name is McKnight Road, and with its abundance of malls, restaurants, car dealers, and the like, it’s the place to go if you love shopping, eating, or sitting in snarled traffic. Since eating is the only aforementioned activity I enjoy, I routinely avoid the area like the Pittsburgh Pirates avoid playing in the post-season. I only venture into the fray when there’s something there I can’t get elsewhere.

A while back, my wife, who does NOT share my aversion to shopping, mentioned that she saw a “tool place” up in the forbidden zone. Somehow I got the impression it was a Harbor Freight tool store, and while I thought it might be an interesting place to look around in, it didn’t ratchet the enthusiasm level up enough to venture into such hostile territory. Some time later, though, I came across a Rockler sale flyer, and I discovered THEY were the new kids on the block. After a brief struggle with my inner demons, and an extra dose of meds, I ventured north.

Into the Forbidden Zone

On my first visit to Rockler’s, a while back, I didn’t have anything in mind to buy; I just planned to have a look-see, so when I DID need something, I could dash in, get it, and scurry back south. Inexplicably, once I got there, I discovered several items I hadn’t been aware I needed, and proceeded to do a fair bit of damage to my MasterCard.

Fast forward a bit, and HomeFixated Is now closing in on three years of proudly having Rockler as a sponsor. If you’re a woodworker, you are undoubtedly familiar with the Rockler brand. If you’re new to the pastime, or not fortunate enough to dwell near one of their 22 stores or 36 independent resellers, here’s a little taste of what’s in store…

Dan Brown, who has managed the Pittsburgh Rockler store since its opening in April 2004, met me there on a recent brisk November morning. Despite having to break away several times to help his associate, Marty Swartz, take care of a steady flow of customers, Dan very graciously spent over an hour showing me around and answering my questions.

As I stood there in a euphoric daze (which may have been amplified by the extra meds), wondering where to begin, Dan steered me toward the wood racks. The store carries a great assortment of traditional hardwood and unique exotic woods, so you’re likely to find just the right grain and color for that display case you’re making to showcase your collection of Edsel key chains. There’s also a section with veneers and embossed inlays. Dan said if he was turned loose, he’d fill the entire store with wood. I think Dan likes wood…

No Drooling on the Tools, Please

Moseying around, I was quickly sucked in by the gravitational pull of the big tools—the table saws, power planers, lathes, sliding miter saws, the CNC Shark routing machine and the smaller Click-N-Carve, and the like. After wiping off the drool, I resumed exploring by taking a look at the dust collection systems, then checked out the smaller power tools, including drills, routers, multitools, and all the accessories you can think of for all of the above. A great selection of offerings from such makers as Fein, Jet, DeWalt, Porter-Cable, Festool, and MANY more were on display. Next, I wandered through aisle after aisle of MORE stuff I didn’t know I needed, dammit! Clamps, bits, a universe of saw blades, jigs and kits for everything from making your own shutters to making a rolling library ladder…

Then there’s the hardware section, with brackets, knobs, handles, nuts, bolts, specialty screws, hinges, more types of finish than I knew existed, and on and on. And all throughout the store are end caps and displays with various handy items to make your working time easier and more productive, many of which are on sale at great prices, so you HAVE to buy them! And in case you’re stumped for a project, the Woodworker’s Library has rack upon rack of titles including plans and instructional materials.

A Passion for Woodworking…

At approximately 5000 square feet, the Pittsburgh store isn’t the biggest in the Rockler stable. Despite this, their performance for the past several years ranks in the top third of all stores. My guess is that this is due in large part to the passion, enthusiasm and positive attitude Dan and his five associates bring to the table (which was probably made by one of them!). Dan feels blessed to be able to make his living in a field he’s passionate about; he’s been involved in woodworking since he was a Cub Scout. He loves being able to share his knowledge and enthusiasm for the subject with a wide range of enthusiasts, ranging from newbies to accomplished craftsmen.

Toward the back of the store is a bulletin board, the Rockler Wall of Fame, on which are proudly displayed dozens of photos of projects done by employees and customers. There’s some incredible stuff there, including hand-carved birds, hand-made guitars, wooden inlaid vases and bowls, numerous pieces of beautiful furniture, and even a hand-made crossbow!

Connecting with the Community

Another way Dan and his co-workers share their knowledge and enthusiasm with the local community is through sponsoring frequent classes and demonstrations at the store. The demonstrations, held pretty much every Saturday, are free, and include topics such as making tight box joints with a jig and router, turning your own Christmas ornaments on a lathe, steam bending wood, or demonstrating the features of cool new tools such as the CNC Shark.

The classes are held once a month, normally on Sunday at noon, and include lectures, demonstrations, and often some hands-on training on such topics as Preparing boards for glue up using a jointer and planer, Introduction to veneering, Introduction to turning, and How to produce a fine finish from sanding to top coats. Most classes run three hours, limit attendance to 3-6 participants, and charge a nominal fee to attend.

Dan also sends out an email about once a week, informing subscribers of current deals available at the store. He also provides links to resources and local clubs, to help local woodworkers connect, including the Western PA Woodworker’s Guild , Turner’s Anonymous, and the Blazing Blades Scroll Saw Club. Dan and his fellow associates are also happy to discuss your plans for upcoming projects, offer information or advice, or just shoot the bull about woodworking!

Unfortunately, the photos and brief description here can’t BEGIN to get across how cool it is to actually nose around in a Rockler store. The variety of quality items they manage to pack into their relatively small space is incredible. So grab your (or even better, someone else’s) credit card, take your meds if necessary, and head north, or east, or in whatever direction your closest Rockler’s lies. If you’re within driving distance of Pittsburgh, the local store is at 7402 McKnight Road. If you’re too far away, or low on meds, take solace in the fact that most of the great stuff available in the stores, along with many additional items, can be had from the Rockler website. Just make sure you read up on the HomeFixated official guide to scoring the best deals at Rockler first, and you might save yourself a few bucks! The site also has a great blog and lots of how-to videos, and Rockler offers a 90 day, 100% satisfaction guarantee on everything they sell.