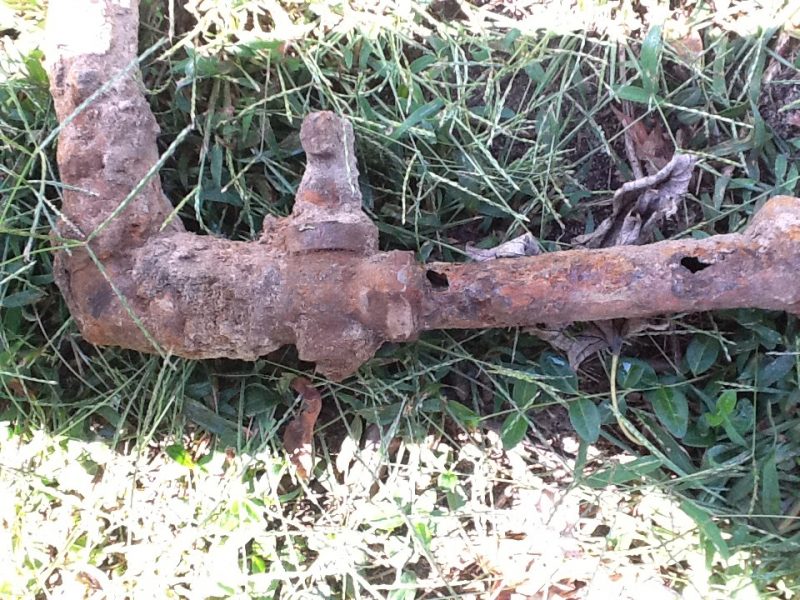 Recently I had some old concrete removed from my yard. It worked out pretty well. I put an ad on craigslist for free fill and a few days later I got an email from a guy who needed fill. All I had to do was break up some of the larger sections and, with the help of my dad’s small tractor, help load the concrete on his trailer. I was almost ready, moving the very last chunk of concrete prior to him showing up when I just touched the valve box to an old outdoor spigot that never worked. The spigot was originally attached to some very vintage sheds, but the valve, which was about two feet below grade, was rusted shut and never worked. I never cared to use it or even think about it. Of course that all changed on concrete pick up day.

The valve box was an old 6 inch ceramic cylinder and unfortunately didn’t offer much protection from the last concrete chunk I was moving. As soon as I moved the concrete away from the valve box, up came a-bubbling fluid. However, unlike for Jed Clampett, this fluid was not going allow me amass a fortune and move away from here, but it did make me move quickly to find a shut off valve. Well as water billowed up from the ground I couldn’t find a valve except the main shut off valve to the house. At that point I had no water to the house and the guy had shown up at my house for the concrete.

Two hours later I can finally start digging the line up to find where the leak was coming from. Goodie! Besides the fact that the line was running completely counter-intuitive to the direction one would think, it was also terribly rusted several feet from the valve, making any repairs near there impossible. After excavation I was able to see what really happened. The valve box had shifted just a little bit and come into contact with the pipe. The pipe was so rusted that it simply fell apart, but not near the valve box. It crumbled nearly a foot away from where the valve box would have struck the pipe. It was only a matter of time.

Simple fixes were out of the question. If it had been PVC I could have cut the pipe and installed a new coupling and perhaps a new valve, but this was dreaded old galvanized pipe. This meant I had to try and find a joint to unthread it or cut and try to cap it at a place that wasn’t terribly rusted. The concern was that if I tried to unthread it I might crack it further back and I’d end up chasing the pipe all over the yard; not a task I wanted to undertake, especially as the sun was setting. My only real option was to cut it at a place in the pipe that still had some solid wall. I should also say that the help I had at the plumbing section at the big box store suggested stop leak tape, which created a giant water balloon when the water came back on. When it comes to plumbing leaks, tape is very rarely the solution.

However, when you cut galvanized pipe somewhere in the middle you have no threads to screw a cap on. And since the pipe was rusted a little and I didn’t have a threading machine, threading a cap was not an option. The only solution I had was a compression coupling with a short nipple and a cap. Perhaps not the most optimal solution but at 8:30 at night it was the one that worked.

A compression coupling is a large coupling that is longer than a normal coupling. The ends are flared out and have threads. These ends have threaded nuts that slip over the pipes and a rubber gasket that fits snugly into the flared ends of the coupling. As you tighten the threaded nuts the rubber gasket squishes down and expands sealing the pipe. It works great for a variety of repairs and for joining pipes. It sealed the deal for me as well. After using a little thread sealant on the cap and locking the nuts down, the leak was finito! Thank goodness because I needed a shower! And now, I ask you, what fun things have you found lurking beneath?