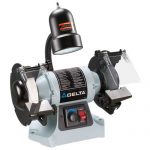 Delta recently sent us their GR275 6 inch Bench Grinder to review. I decided to put it through it’s paces rehabilitating several very beat up chisels, and, of course, a spoon. You’re probably wondering, “why would you use a spoon on a grinder?” Well, it seems a certain special someone, decided to run our garbage disposal with a spoon in it. It turns out that even though a spoon is metal, it can suffer quite a bit of damage from several seconds in the disposal. More on this shortly. . . .

Assembly of the Delta GR275 grinder was a breeze. There were not a huge amount of parts, and everything went together smoothly. The base of the unit is beefy cast iron, making the GR275 very stable and solid. It’s the perfect solution to fixing spoons that your anonymous friend attempted to destroy.

Amazingly, I was able to carefully grind down the edges of the spoon with the GR275 to remove some pretty serious nicks and gouges. It took just a little elbow grease afterwards to file down some sharp edges by hand (you really don’t want a sharp spoon). Now, the spoon is back in action and ready for it’s next trip into the cereal bowl (and hopefully not the disposal).

The Delta GR275 also worked its magic on more conventional grinding tasks like tuning up chisels. It’s important not to overheat tools like chisels on a grinder since the metal can lose its temper. And you won’t like your chisels when they lose their tempers. There’s nothing worse than an angry chisel. I kept a cup of water handy to cool them off as things started to get heated. The variable speed control (2000 to 3450 rpm) also comes in very handy, allowing you to dial back speed when needed to keep things from getting too toasty.

The Delta GR275 runs remarkably smoothly, with very little vibration. A lot of that stems from the solid cast iron base. The wheels and rotating parts also seem true and well balanced, which is particularly useful when stuff is spinning at thousands of rpm’s inches from your hands. Naturally, grinders can be dangerous. Although the GR275 features typical safety features like eye shields, make sure you read all the safety precautions before use. In particular, it’s a good idea not to wear gloves, or especially neckties, when working around grinders. Since I try to never wear neckties, that’s not asking much of me. If you like to Home Fixate in a suit, beware.

One standout feature of the GR275 is the quick-change feature for the grinding discs. Delta has a clever nut with fold-out wings that enable relatively effortless disc changes. It took me a little while to wiggle the disk off once I had the quick-change nut off, but the process is pretty handy. You’ll still need the included wrench to secure the shaft. Also, on the left quick-change nut, you do have to remember it’s lefty-tighty, righty-loosey rather than the usual thread orientation.

Despite being a great all around tool, I did have a couple minor critiques. Namely, the tool rests leave a bit to be desired in a couple specific ways: 1) Adjustments to move the tool rest in or out (which may be needed after you adjust angle on the rest), are a bit cumbersome. You have to slide the included wrench into a narrow recess between the wheel and the motor to loosen and tighten the two small bolts that hold each tool rest in place. It would have been nice to see these bolts easier to access and adjust quickly. 2) One tool rest is designed for drill bits and the other is straight and flat for more typical grinding. Unfortunately, they are not interchangeable, which means the drill bit style rest is always on the left and the flat rest is always on the right. As a result, you would need to actually swap grinding wheels if you wanted to grind first with a lower grit and then finish with a higher grit wheel. Interchangeability, or possibly a second set of each rest for the opposite side would be a welcome addition to the tool.

But those are relatively minor gripes. Overall, I found the Delta GR275 grinder a pleasure to work with. Delta thoughtfully included two grinding wheels, a polishing/buffing wheel (with a little bushing needed when mounting it), a flexible light housing to shed light on your work, a diamond wheel dresser to keep your wheels flat, and a small wrench for assembly and adjustments. You’ll need to provide your own buffing compound if you plan to use the buffing wheel. If you’re looking to clean up and sharpen your lawn mower blades, chisels, scrapers, or, even repair mangled spoons, the Delta GR275 is a great tool to have in your workshop. The DELTA GR275 6-Inch Variable Speed Grinder

is a bargain and available for about $100.