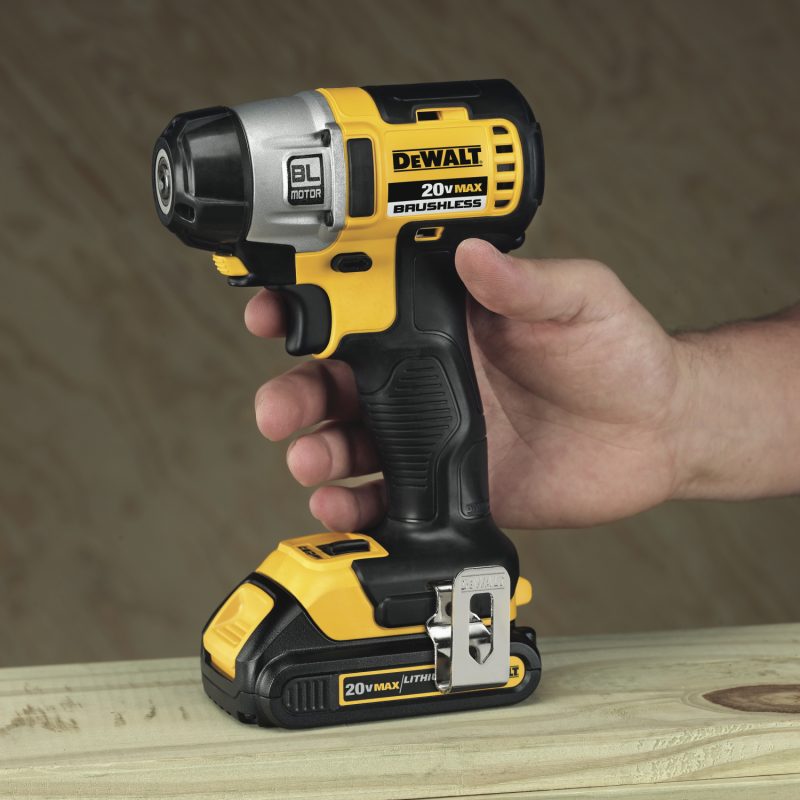 Aside from providing important tool company party coverage at last year’s STAFDA, I reported on the emerging trend of using brushless motors in power tools. Although brushless tech has been around for years, I think it’s safe to say the rush to roll out power tools using brushless motors is on. Before I was even on the plane home from a media event breaking brushless tech hosted by DeWalt at Disney’s Hollywood Studios in Orlando, I received a press release from Milwaukee announcing the release of their FUEL 18v ½” Drill/Driver and Hammer Drill/Drivers brushless tools. If you’re excited by the prospect of more efficient, more reliable and longer running tools, expect to see an onslaught of brushless tools coming out in the coming months and years. I predict it’s the next biggest tech rollout since the transition to Lithium Ion batteries kicked off. Aside from their new 20v Max Brushless Impact Driver, DeWalt also announced a whole slew of new products in their corded, 12v Max and 20v Max product lines. 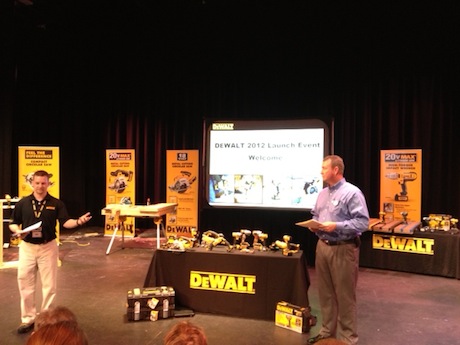 
The star of the show at DeWalt’s media event was their new 20v Max Brushless Impact Driver. Available in April this year, this impact driver can be purchased as a bare tool, with a 1.5 Ah compact battery or 3.0 Ah battery. Retail pricing will range from $179 for the bare tool, $279 for the 1.5 Ah version to $349 for the 3.0 Ah version. The batteries will all features DeWalt’s new fuel gauge, sensibly located at the back of the battery (in-line with your sight when holding the tool in a normal grip). Three LEDs with a 20 second delay keep your work visible and on-board tool bit storage keeps your spare bit close at hand. The two biggest stand-outs to me were a new pushbutton ¼” chuck and a three speed transmission. The pushbutton chuck is essentially a secondary trigger mounted higher and further forward from the main trigger. While it’s certainly a more ergonomic and less awkward solution to many of the ¼” chucks on the market, I had a couple issues inserting bits. Removing bits was a breeze, but I need more hands-on time with the push-button chuck to determine if the brief bit insertion hiccups were a glitch with the particular tool I was using, user error, too much caffeine or typical of the new design. The three speed tranny enables users to dial in a speed and torque setting most suited to their particular application. In fact, we used the new 20v Max Impact Driver to drive relatively soft brass hinge screws. With gear 1 selected, power was smooth, controlled and prevented near instant over-tightening and/or blasting through the screw head with too much power.

Other Non-Brushless 20v Max Tools Announced
Not everything is brushless. . . yet. DeWalt showed off lots of new products in addition to the brushless star. 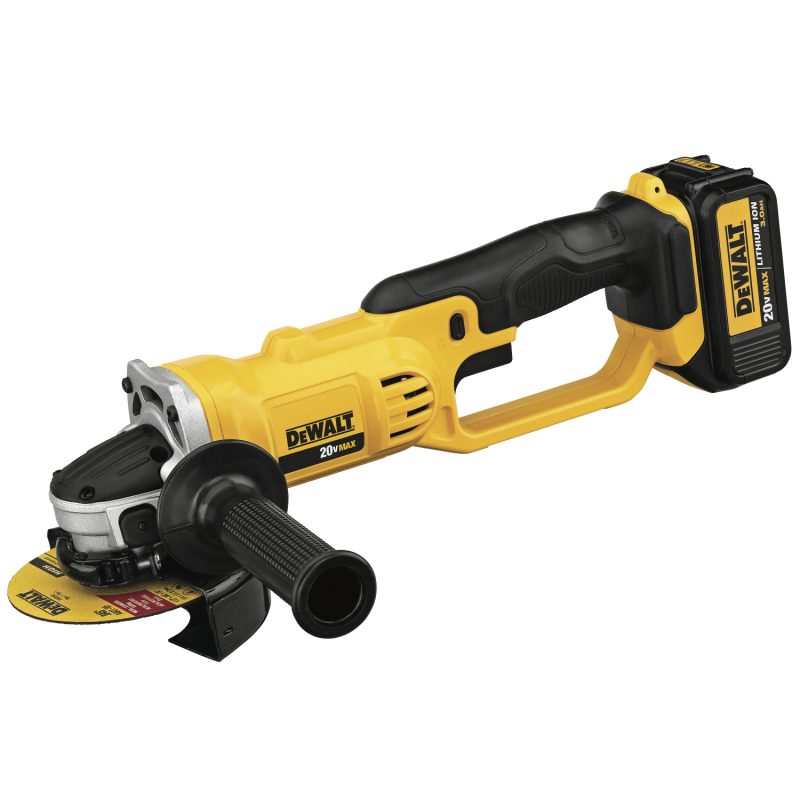 Coming in May to industrial distributors at $299 MSRP, the DDCG412L2 will feature a Quick-Change wheel release, a tool-free adjustable guard, and two position side handle. A bare DCG412B unit ($199 MSRP) will also be available. 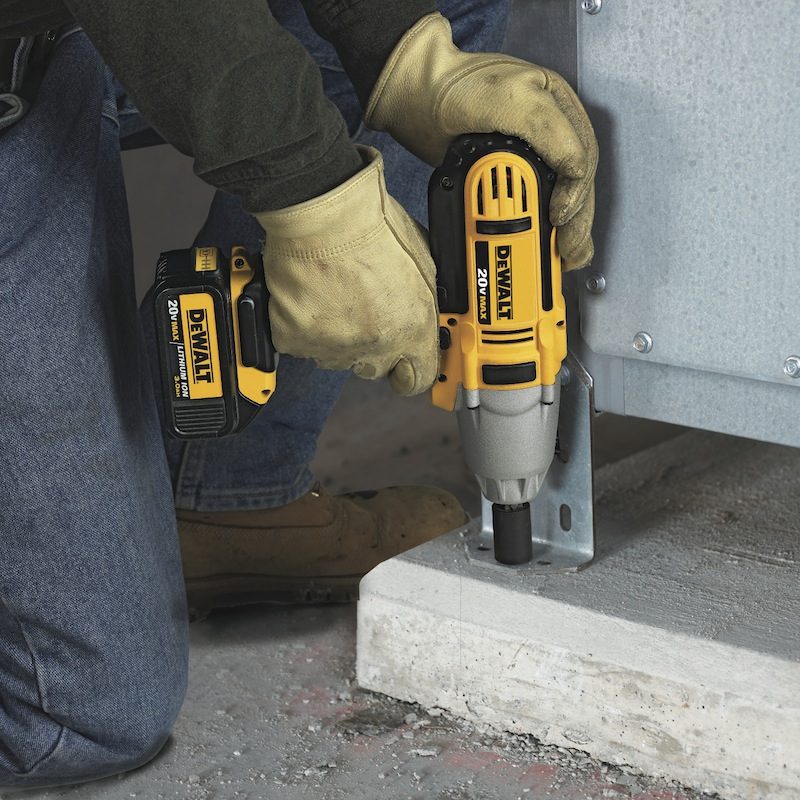 Available with Detent Pin Anvil (DCF889L2) or Hog Ring Anvil (DCF889HL2) via industrial distributors in June, each will have a $329 MSRP, or $169 for the bare tool. Spec’s include 300 ft/lbs of torque, 1650 RPM, 2600 IPM and the new 3.0 Ah battery with fuel gauge. Variable speed, electronic brake and magnesium gear case keep all that power under control. 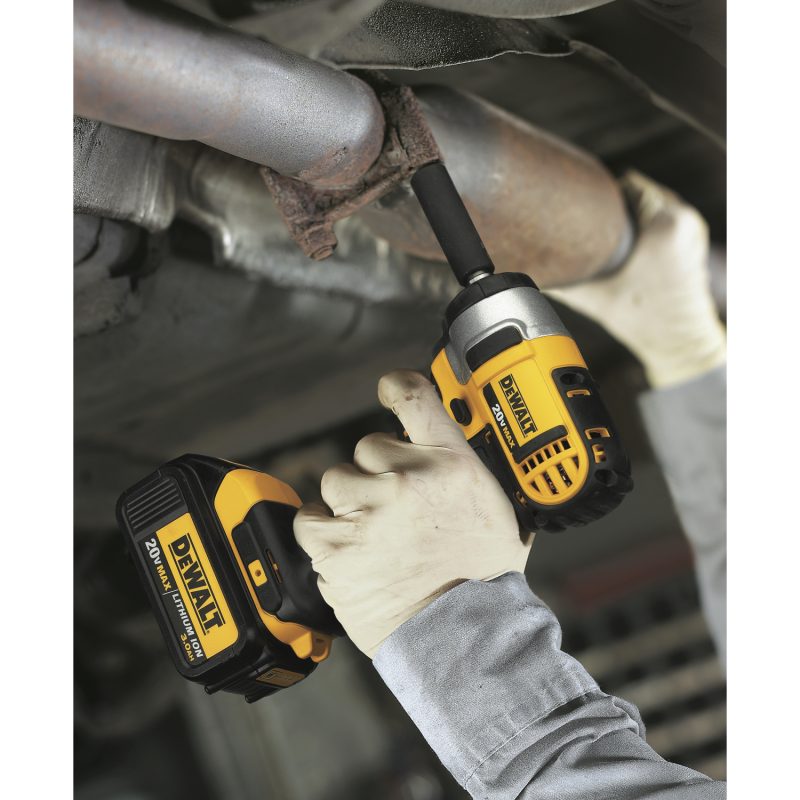 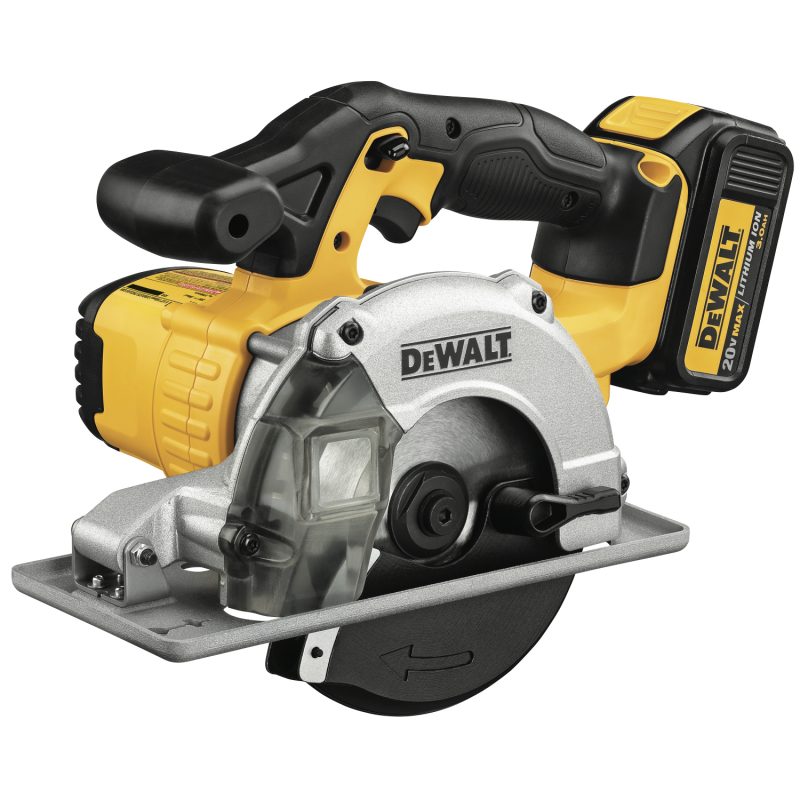 At an MSRP of $359 for the DCS273L2 with 3.0 Ah battery or $199 for the DCS273B sans battery, this new Circ Saw will be available from independent distributors starting in July. A 3700 RPM motor pairs with a 5 1/2 “ carbide-tipped metal cutting blade. An LED light and multi-coated Sight-Line keep your metal cuts in view. 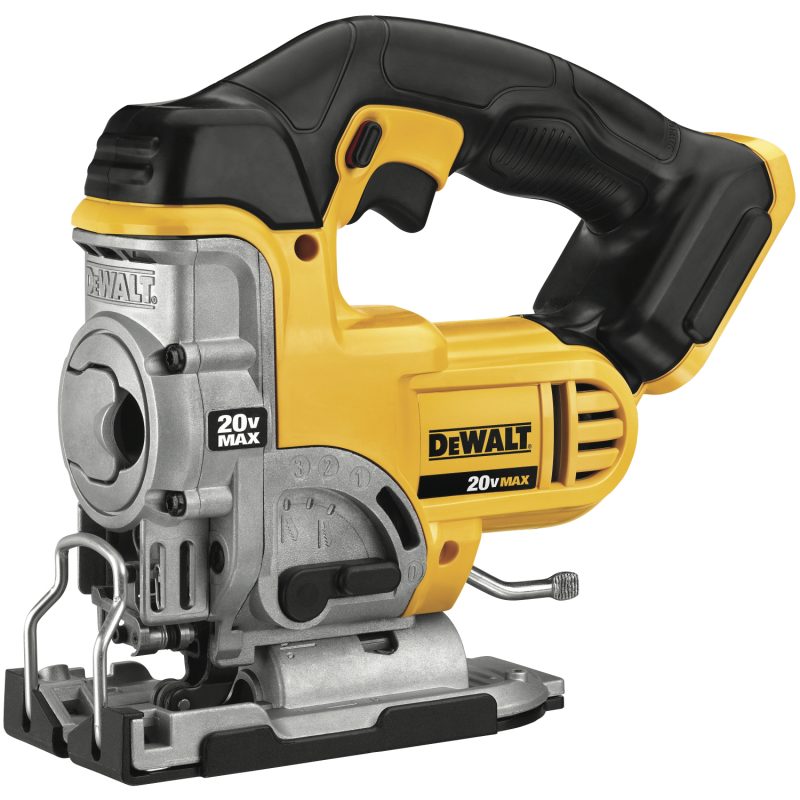 Coming in April through independent distributors, the DCS331L1 will have an MSRP of $279, or $149 for the bare tool DCS331B. I’d describe the anti-slip grip as a slightly angled top-handle design. Like most jigsaws in its class, these will have a keyless blade change. The new jigsaw will also feature a four position orbital action and an adjustable blower to keep your line unobstructed. The saw will come with the 3.0 Ah battery/fuel gauge and will dish out 0-3000 strokes per minute. 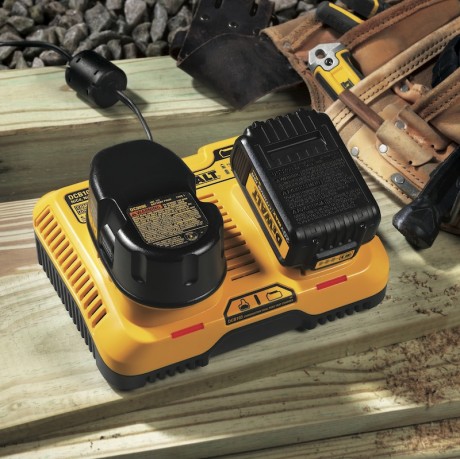 It turns out that there are more than 60 million of DeWalt’s previous generation of batteries floating around, (that’s not including millions of 20v Max Lithium Ion batteries that have been rolling out since last year). We have mentioned this before, but it’s worth clarifying that DeWalt’s current 20v Max batteries are 18v nominal voltage. Since turning its back on 60+ million previous generation battery users might result in rioting in the streets, or, at minimum an “Occupy DeWalt” uprising, it’s understandable DeWalt isn’t keen to abandon or neglect those users. That’s why DeWalt’s new Dual Port Fast Charger (DCB103), with an MSRP of $99, makes perfect sense for current market conditions. The charger, available anywhere DeWalt is sold starting in April, supports both stem pack 7.2, 9.6, 14.4 and 18v in addition to the new 12v Max and 18v Max batteries. So, if you’re rockin’ retro and fresh-to-the-market Li Ion products, you’ll want this dual port charger which charges both sides simultaneously.


Bearing a strong resemblance to its Porter Cable Clampsaw sibling (minus the clamp), the new pivot Recip Saw from DeWalt sports an adjustable three position handle. Fully extended, the pivot recip feels a bit like holding a full size reciprocating saw that accidentally was zapped in a Honey, I Shrunk the Sawzall movie. In pistol positions, the pivot saw feels more like an enlarged version of the Bosch Mini Reciprocating Saw and Milwaukee Hackzall 12v. The DeWalt pivot saw felt solid, very controllable and had plenty of power to cut through a ½” steel pipe. Although based on very little hands-on time with the DeWalt, I still think I prefer the very compact, one-handed versatility of the Bosch and Milwaukee mini recips. 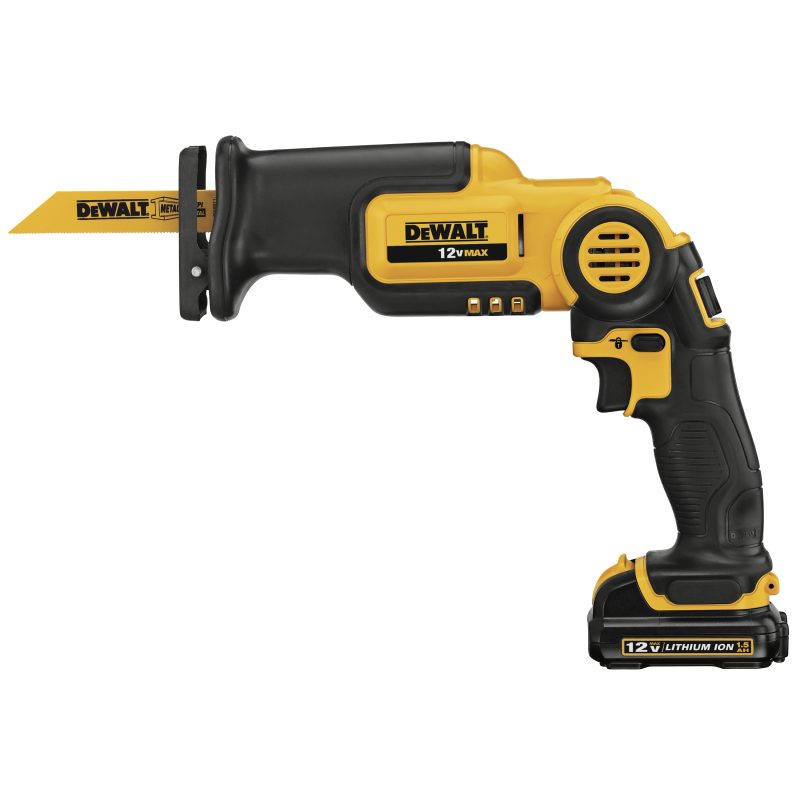 If you’re more inclined towards DeWalt tools and/or prefer adjustable handle configurations, then the DeWalt pivit reciprocating saw promises to be a very versatile addition to your tool arsenal. The pivot recip should be hitting the shelves of your local Lowes and independent distributors starting April in MSRP’s of $149 to $279 depending on your preferred configuration. 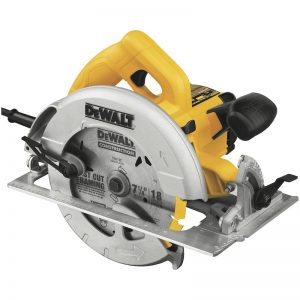 What’s that? You’re sick of hearing about cordless tools? You want more amperage-sucking good ol’ corded tools? You’ll be happy to hear DeWalt is releasing two new corded circ saw options for you in the second half of 2012. The DWE575 and the DWE575SB, with MSRP’s of $129 and $139 respectively, weigh in at just 8.8 pounds. The latter is the same saw, however with the addition of an electric brake. Both saws feature integrated dust blowers capable of producing a mini leaf blower effect for sawdust that may be obscuring your cut line. Despite the similarity, we don’t really recommend using these saws as leaf blowers. With an angle setting so steep it makes Disney’s Matterhorn ride jealous, these saws max out at a 57 degree bevel capacity. They chomped through a stack of three 3/4” plywood boards without breaking a sweat; not a feat you’d attempt with any cordless brethren. 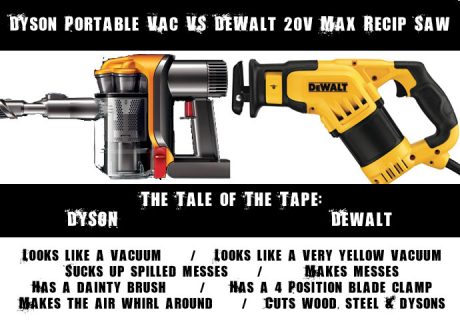 Not content to stick with conventional reciprocating saw design, DeWalt has dreamt up a whole new take on the reciprocating saw. The new DWE357 looked more like a portable Dyson vacuum than a recip saw to me (see the graphic above for more serious style analysis). Available from home centers and indy channels for an MSRP of $129 in the second half of this year, the new reciprocating saw weighs in at 6.8 pounds and just 14.5 inches long. Its 10 amp motor and 1 1/8” long 2800 strokes per minute are ready to chomp whatever you need to cut. If you’re working with the saw extended, you’ll appreciate having less weight working against gravity once you have make the cut.

But by the same token, you’ll like have less weight working downward during the cut. This new recip saw also features a lever-actuated four position blade clamp. That translates to being able to cut up, down, left or right with a simple swap of blade position. If you’re used to a reciprocating saw with a pivoting handle, swapping blades might seem like a pain. However, if you’ve used a fixed handle recip, the quad position blade clamp will offer you some welcome versatility. Maybe it’s long-term bias from working with conventional reciprocating saw design, or possibly it’s the Dyson / Dust-Buster design cues, but I’m not totally sold on this design yet. However, if you’re working overhead, in confined / awkward spaces or you have a Dyson vacuum fetish, the new DeWalt reciprocating saws have some legitimate advantages to offer.

Conclusion
If you’re a fan of yellow tools or are thinking about exploring the DeWalt tool lineup, this year promises some exciting new releases. Although some features like fuel gauges are a bit overdue, others like the three speed transmission and brushless motor are welcome innovations with very tangible benefits to users. Thanks to DeWalt for hosting a great event and sharing their innovations with us, and thanks to Disney’s Hollywood Studios for a great backdrop and entertainment for the event.

Additional thanks to DeWalt’s hardworking IMRE PR crew, and to some great pre, during and post-event analysis and camaraderie with fellow media. Special shout-outs to:

Patrick from the highly-esteemed Fine Homebuilding
Michael Springer, globe-trotting, freelance tool-reviewing maniac
Jay from the online tool retail tour-de-force Ohio Power Tool
Rob from the I’m on prime-time and ready for syndication A Concord Carpenter,
Dan from the free tools for (almost) everyone Handyman Club
Tom from the sound-level-meter brandishing ProToolReviews.com
Todd from the FrontSteps Uni-Saw-loving / SawStop-hating blogging empire
Bob from the print is far from dead Wood Magazine
and
Rob from Strata G for secretly wooing media after-hours with ideally-sized beers

If you’re breathless for brushless, you can find out even more about Brushless tech straight from Dewalt.

PS: DeWalt, I stole a pair of your prop promo shoes. Sorry. By the time you read this, I’ll be across state lines. I’m pretty sure that makes me either safe from prosecution or subject to federal criminal charges.