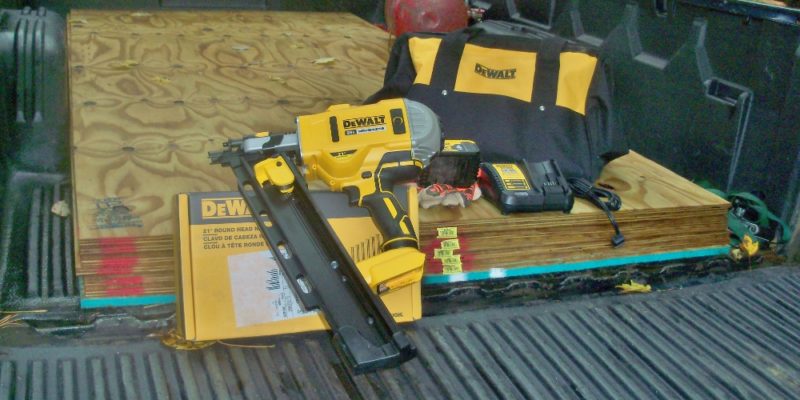 This post is sponsored by The Home Depot. The DeWALT 20-Volt MAX Lithium-Ion 21-Degree Cordless Framing Nailer, referred to as the 20-Volt Max DeWalt Cordless Framing Nailer for the purposes of this review, includes a charger, 20-Volt MAX Lithium-Ion battery, and a rugged bag. The bag has a reinforced bottom, substantial zipper, and outside pockets that are spacious enough for those items you need when framing. Inside it holds the The DeWalt cordless framing nailer, charger, battery, with additional room for extra batteries, nails, and the like. This set packs up well and it really packs a powerful punch as it drives in nails.

The DeWalt cordless framing nailer “clocks in” in the morning and will put in a full shift driving nails. I drove approximately 600 3 ¼ inch nails over a 5 hour span before the battery needed to be replaced and charged. From reinforcing header beams to nailing in floor joists, from rebuilding the sill plates to tying in the 4 X 4 up posts, I did my best to put DeWalt 20V Cordless Framing Nailer through its paces and it stood up to the challenge.

There are two settings for firing the nails; single trigger actuated and bump actuated. Sliding the switch over to show one nail will allow you to pull the trigger after the tip is depressed against the work surface. Sliding the switch over to display three nails allows for firing nails repeatedly by ‘bumping’ or ‘bouncing’ the tip of the DeWalt 20V Cordless Framing Nailer against/off of the work surface while keeping the trigger pulled. In this setting a nail will be fired every time you ‘bump’ the tip against any surface. As I used the bump actuated setting, the only thing missing from our construction scene was me calling out “Say hello to my little friend!” in my best Scarface impersonation. And ‘my little friend’ did not disappoint as we worked on the guest house.

Naturally, common sense safety should apply. The framing nailer doesn’t care what you bump it into in bump-fire mode, so keep that finger off the trigger unless you know exactly where you’re intending to shoot the next nail.

There is also a power setting which adjusts the driving strength of the DeWalt cordless framing nailer. For shorter nails or softer materials, you may want to use setting 1. For longer nails or if the nail is not being driven in as far as you would like, you can switch the speed setting to 2 and it will increase the driving power to force the nail in farther. I used speed setting 2 for the 3 ¼ inch, round head, plastic collated framing nails that I used, and it drove them in beautifully.

The DeWalt 20V Cordless Framing Nailer Goes Off the Grid

The point of having a cordless framing nailer is to ‘cut the cord’ and work independently of air compressors and possibly even electricity (after you have fully charged the 20-Volt MAX Lithium-Ion battery). My friend Guss has a genuine log cabin, built by a homesteader many decades ago. It sits back in the middle of a great many acres of woods. As seen by his “driveway,” this cabin is off the grid with no electricity, gas, sewer, etc. There is a well with a pump to get your water, there is a wood stove to heat the cabin and there is an outhouse that is out of the house and the exact same temperature as the outside.

The homesteader, a.k.a. The Original Do-It-Yourselfer, built this cabin using trees from the property that he fell himself. But before starting on the cabin, he first built a small, one room structure to live in while building the cabin. This is now used as the guest house. He had used non-treated lumber for the floor joists which led to the floor heaving in the center and sagging on the sides. We removed the floor entirely and then put the DeWalt 20V Cordless Framing Nailer to use. I had charged the battery that came in the set and one additional battery for back-up prior to heading deep into the woods.

The battery that comes with the kit lasted over 5 hours and approximately 600 nails without failing or jamming. It was used with sawmill-cut, true 2×4″ boards, 4×4″ posts, as well as lumber from Home Depot that is 1 ¾” thick. Regardless of the type of wood or the thickness, the DeWalt cordless framing nailer was up to the task and drove nails in faster than I could have pulled one out of my nail pouch.

• Dual-speed motor optimized to drive a wide range of fasteners for a variety of
applications
• Tool-free selector switch for sequential or bump fire modes
• Tool-free depth adjustment for precise nail placement
• High strength aluminum magazine with easy to operate pusher latch
• Stall release lever to reset driver blade in the event of a jam
• Adjustable rafter hook
• Easy access to the nose piece for the removal of jammed nails
• Dry fire lock out prevents tool from firing when nails are low
• 21° magazine holds up to 49 plastic collated nails
• Capable of driving 0.0148 in. diameter nails into dense wood

A common issue with nail guns centers around the nail being driven deep enough. There are two possible solutions to this. One has been addressed by the DeWalt by having two speed settings on the tool. If the nail is remaining above the surface on setting 1, change it to setting 2.

The other possible culprit is our good friend user error. These framing nailers are not the same as the much smaller finish nailers that you can hold with one hand and pull the trigger. There is a recoil that can push you and the framing nailer back away from the surface. The solution to this is to use two hands and apply pressure to the head of the nailer while pulling the trigger. This additional pressure helps to keep all of the energy moving through the nail and into the material. Using the bump actuated feature does allow you to use one hand and effectively bounce into the material without need of the second hand on the head of the tool.

Another factor is having the material solidly held in place. When I was using the the DeWalt 20V Cordless Framing Nailer on boards that were firmly in place or had pressure against them, the nails drove in just fine. When I was using it to create a ramp with boards that were hanging off the edge of a surface, the boards moved with the shot of the nailer and did not set as reliably. After moving the boards onto a solid surface and adjusting the setting of the nailer to 2, they drove in beautifully.

Nail Guns Will Jam – All of Them

If you run any nail gun long enough, you will encounter a problem. Roofing nailers, finish nailers, framing nailers. . .they will eventually jam for one reason or another. That has been my experience in every case. It isn’t an issue of IF there will be a jam, it is a question of how accessible and user friendly it is to remedy the problem to get back to work.

I found that the DeWalt 20V Cordless Framing Nailer has addressed this in two user friendly ways. First, they have a Jam/Stall Indicator Light on the foot of the tool and a stall release lever at the top of the tool. I had this occur while trying to get the nail heads to not fully set and was able to utilize the lever without needing to use the provided hex tool to remove any of the firing mechanism.

The second method to address a jam is detailed in the manual. The manual provides very clear instructions and diagrams as to how to use the provided hex wrench to remove jammed nails or to replace broken or worn out springs. The design for use as well as repair is well done. They provide the one required tool securely attached to the the nailer itself.

Time for the Big Guns

The DeWalt cordless framing nailer is a powerful cordless nail gun that will set 3 ½ inch nails down to 2 inch nails. While there is a rubber tip to protect your materials when using it, it is definitely not a finish nail gun. Similarly, just because you are pulling a trigger to set a 3 ½ inch nail, this doesn’t mean that it isn’t work to use it. You are wielding close to 9 lbs. with the battery and nails and you are either using the bump actuated setting or applying pressure as you use the single fire setting. This is similar to an air nailer with a hose, but you are much less encumbered when climbing ladders or moving around a job site. As my sweat-soaked shirt attests to, while the DeWalt 20V Cordless Framing Nailer did a ton of work in a fraction of the time, I was still working hard (for a middle aged dad).

I have owned and used framing nailers that run off air, that require butane fuel cells and fire each nail with a spark/explosion, and now the battery powered DeWalt 20V Cordless Framing Nailer. The performance of the DeWalt was outstanding and does not require an air compressor or fuel cells. It is compatible with other DeWalt Lithium-Ion batteries, recharges quickly, and drives nails as well as any. The DeWalt 20V Cordless Framing Nailer is a welcomed tool for any pro or eager DIY-er. Available at The Home Depot for around $399.