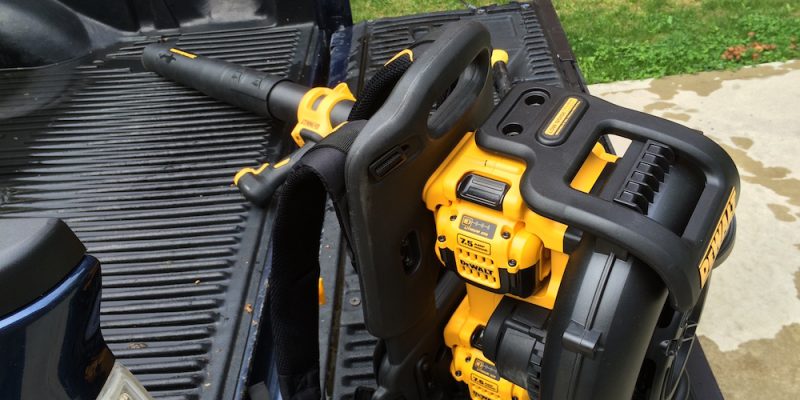 We are fortunate to have a decent-sized yard, with a lot of greenery, including a lot of mature deciduous trees surrounding our property. We spend hours on the back porch, or around the fire pit, as often as we can when the weather’s decent. The downside is that all that greenery requires a fair bit of maintenance, in the form of mowing, trimming, and general cleanup. It’s amazing how much debris rains down from the trees (the technical term is “Tree poop”). Dragging out the gas blower is time consuming and aggravating, both for the operator and for anyone else subjected to the noise. In an effort to quiet things down while cleaning things up, DeWalt developed the new DeWalt DCBL590X2 Backpack Blower, which makes the claim “Gas Performance. Guaranteed.”

The DeWalt DCBL590X2 Backpack Blower has a powerful brushless motor, and is powered by a DeWalt 40V MAX Li-Ion battery. The tool comes with two 7.5Ah batteries and a standard charger. The tool with two batteries is the configuration DeWalt provided to us for the review. Here are the specs from DeWalt: 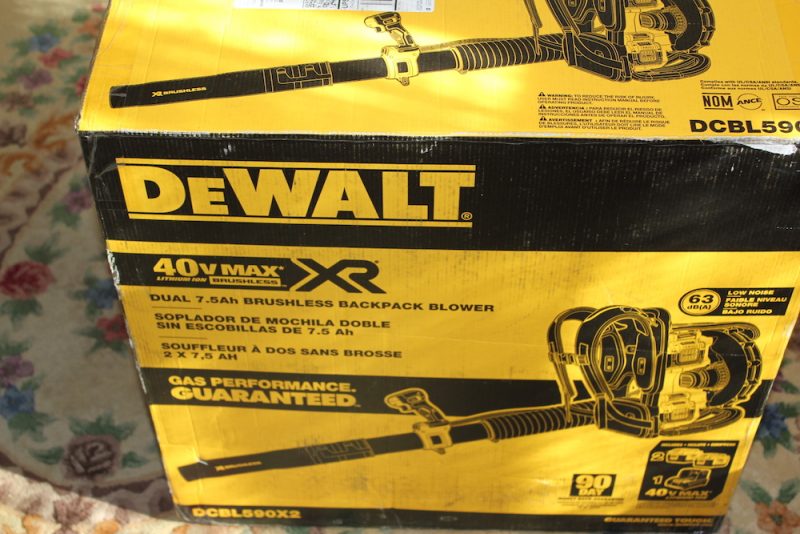 A little bit of assembly is needed before you can fire up the DeWalt DCBL590X2 Backpack Blower. The straight and flexible tubes must be attached to the backpack; total assembly took about ten minutes, and wasn’t too difficult. There is a sporty laminated quick-start card included to guide you through the process.

Once the blower is assembled, all you have to do is slap in a battery or two, and you’re ready to make some wind. Note: If you’ve never used a blower before, or want some great tips, the Outdoor Power Equipment Institute has a pamphlet offering guidelines for safe and courteous use of a leaf blower, be it gas, electric or battery powered.

The DeWalt DCBL590X2 Cordless Backpack Blower has two battery wells, each of which accepts a 40V MAX battery. The blower only runs off one battery at a time, and there is a switch on the control arm to select between them. This allows you to switch over to a fresh battery if you run out of juice 100 yards away from the truck or house. Alternatively, if you’re working close by, you can install only one battery, and save carrying the weight of the spare. Since, at around 4-½ pounds, these are not dainty, lightweight batteries, this option becomes more attractive as the day wears on…The switch also allows you to lock off the tool for transport.

The DeWalt DCBL590X2 Moves Some Debris

We received our evaluation unit in the spring. The yard had been pretty well cleaned up in the fall, but there is never a shortage of tree poop, grass clippings, and other random debris to keep us occupied. In preparation to do battle, I strapped on the DeWalt DCBL590X2 Backpack Blower. The backpack has padded straps, with a connecting strap that goes across the chest. The pistol grip control handle can be quickly adjusted forward or backward along the tube, for your blowing comfort. The unit also rotates freely around the tube, which makes it easy to control as you sweep the blower tube around.

I started out in the back yard. There were plenty of leaves scattered around, some of which fell after the cleanup was finished, some of which blew in from neighboring yards, and one or two which I may have missed during the fall cleanup. There was also a fair sampling of dead branches and other deceased vegetation tangled up in the ivy, grass and bushes. I pushed the switch to select a battery and pulled the trigger.

Even though a lot of the leaves were damp, or decaying and becoming as one with the grass, the DeWalt DCBL590X2 proved to be a good motivator. The blower propelled the leaves down the hill with good force, even those that were tangled in the bushes and undergrowth. The variable speed trigger made it easy to corral them into a tidy pile when I got them to a good pick-up spot.

Moving into the driveway, which is around 100’ long, I quickly had all the grass clippings gone. Around the front of the house, we have some bushes and a bunch of ivy all along the sidewalk. These are generally full of decaying oak leaves, which are a pain to get out, but the DeWalt DCBL590X2 Backpack Blower blasted them loose. I normally use a handheld blower to clean up the sidewalk and street, and while it does a pretty fair job, the DeWalt got MUCH more crap out of the ivy, and moved a lot of dirt, sticks, etc. that the other blower couldn’t budge.

To get a pro’s opinion on the DeWalt DCBL590X2, I asked a local landscaping crew to swap it (temporarily!) for their two-stroke backpack blower. They had never seen one of the DeWalts, and were interested in seeing how it would compare. The operator’s impressions? It was heavier than he expected (both batteries were in), but he said he was impressed with the power, and that it was more powerful than he would have expected from a battery-powered blower. He said that for normal mowing and cleanup jobs, the DeWalt would be a great choice.

The yard they were cleaning hadn’t been cleaned up in the fall, and although there were areas with a lot of debris, the DeWalt held its own. Their cleanup took over two hours, though, and he was concerned that, without extra batteries, they wouldn’t be able to get through the whole job. One thing the crew all agreed on – the quieter DeWalt would be much more enjoyable to be around all day.

The Sound Of Power

The blower is comfortable – as comfortable as a 27-pound backpack can be – and easy to operate. It looks well made, and feels solid and sturdy. In addition to the variable speed trigger, the handle has a speed lock that is activated and deactivated with the push of a button. My cleanup lasted about 25 minutes of fairly constant blowing, at various speeds. I got through it on one battery, which was still working at the end, with one bar showing on the built-in meter.

DeWalt claims “Gas Performance. Guaranteed” for its backpack blower, and indeed its specs are comparable to those of gas-powered blowers in the 30-35cc range. It definitely has some good “oomph” to it, and did a great job of digging out intertwined leaves and other debris from their hiding places, and moving them across the yard. In addition to avoiding the hassle of messing with gas, the DeWalt DCBL590X2 has some other significant advantages over its petroleum-fueled counterparts.

Concerns over noise and air pollution have led cities all across California, and increasingly in other states, to ban gas-powered tools, and blowers in particular. Many other municipalities and facilities, such as nursing homes, golf courses, office complexes and the like, limit the hours these tools can be operated, due to the noise and fumes. The DeWalt DCBL590X2, being significantly quieter at 63 dB(A), is free to breeze right in where its gas-powered brethren are unwelcome.

Additionally, the quieter, exhaust-free blower would be ideal for indoor cleanup of warehouses or other large enclosed spaces, such as a teenager’s bedroom. It would also be an excellent choice for outdoor facilities like stadiums, where an exhaust haze is an unwelcome side effect. Here’s an entertaining little video from Edmunds, comparing the emissions from a gas-powered blower to those from a Fiat and a Ford F150:

Blow The Cobwebs Off Your Wallet

DeWalt’s new backpack blower is a sweet tool, with just a couple of drawbacks. The primary one is cost. The whopping 7.5Ah Lithium Ion batteries used by the DeWalt DCBL590X2 ain’t cheap, and the blower comes with two of them. The standard package price for the blower, two batteries and the charger is currently around $699, although we found it as low as $619.

While this is a significant initial outlay, once you’ve made the investment you’re set. The blower and batteries are guaranteed for three years, and there’s no ongoing maintenance cost. With a gas-powered blower, there’s the recurring expense of gas and two-stroke oil. Over a three-year period, if you use a gallon and a half of gas a week, at $2.40/gallon, your gas costs alone would be over $560 – and you still need oil. On top of that, it’s almost impossible to get gas that doesn’t contain ethanol, and ethanol is the evil archenemy of small engines. Factor in maintenance costs to adjust, rebuild and replace carburetors – along with maintenance downtime – and the DeWalt DCBL590X2 starts looking like a pretty good deal.

The only other drawback is battery life; this blower has a big, powerful motor, and run time, going full bore, is about 20 minutes per battery. Lower speeds will give you longer run time. For a large property owner or facility maintenance crew doing daily cleanup, that should be fine. Ditto for a mowing crew, using the blower to clean up clippings after mowing, especially if they keep the batteries topped off with a charger in the truck between jobs. For cleaning up large yards full of leaves in the fall, I’m guessing if I got out there every day and kept up with the day’s accumulation, I’d be fine. If I slacked off, which is highly likely, and the leaves piled up, more batteries would be needed. Or a beer break would be required periodically. Guess where my vote goes?!

The DeWalt DCBL590X2 Backpack Blower would be a welcome addition to the arsenal of any mowing crew, maintenance team, or anyone who owns a large property with a lot of green stuff to maintain. The ability to slap in a battery or two and get right to work, vs. preparing the gas/oil mix, filling the tank, pulling the starter rope until it (hopefully) starts, then breathing the fumes and listening to the whine until you’re finished, is likely to appeal to a LOT of users.

Add in the ability to use the blower in otherwise restricted areas or times, and you’ve got a very attractive addition to the landscaping tool lineup. The DeWalt DCBL590X2 Backpack Blower comes with a three-year warranty, a one-year free service contract, and a 90-day no-questions-asked money back guarantee. The DeWalt Cordless Backpack blower comes in tool only, one battery kit and two battery kits, all with quite a price spread ($319 for tool-only, $499 for one battery and $699 for two battery):