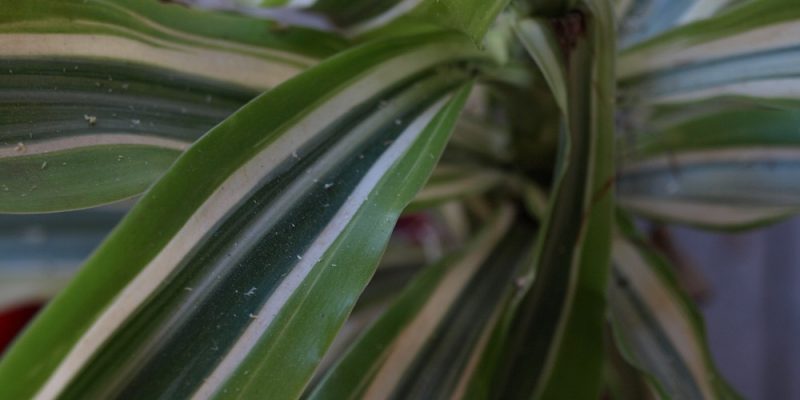 I will be the first to admit I’m not very good with houseplants, mostly because I tend to forget to water them on a regular basis. After all, the rain will start to pound on the roof and my slightly screwy subconscious registers the fact that the Higher Powers have taken care of one task on my never-ending to do list. It always slips my mind that my job is only half done until I start to wonder why the allspice plant in the corner is looking crunchy. That’s the reason my indoor plants go outdoors as soon as the weather warms up. While I’ve talked at great length about how succulents make wonderful houseplants if you’ve got a bright enough windowsill for them to hang out on, there are plenty of other species that will get along just fine indoors with a minimum of effort on your part. So, here are some of my favorites.

Although my flaming Katy (Kalanchoe blossfeldiana) plant is quite colorful when it’s in flower, the striped dracaenas that I own (Dracaena species) are often the flashiest plants in the house. These long-lived specimens only seem to need a little water and a little light in order to thrive. They also get along fine in small containers and don’t have to be re-potted all that often. In fact, I’ve gone several years without doing so now. Bugs also seem to ignore them. The only major downside to dracaenas is that if they don’t get watered enough on a regular basis or if the temperatures fluctuate too far to either extreme, the tips of their leaves will start turning an unsightly shade of brown. Sometimes the lower leaves even die off. Of course, the dead or brown leaves are fairly easy to remove. However, they  shouldn’t be too much of a hassle to deal with as long as you remember to water the dracaenas about once a week and keep them from being exposed to extreme temperatures. 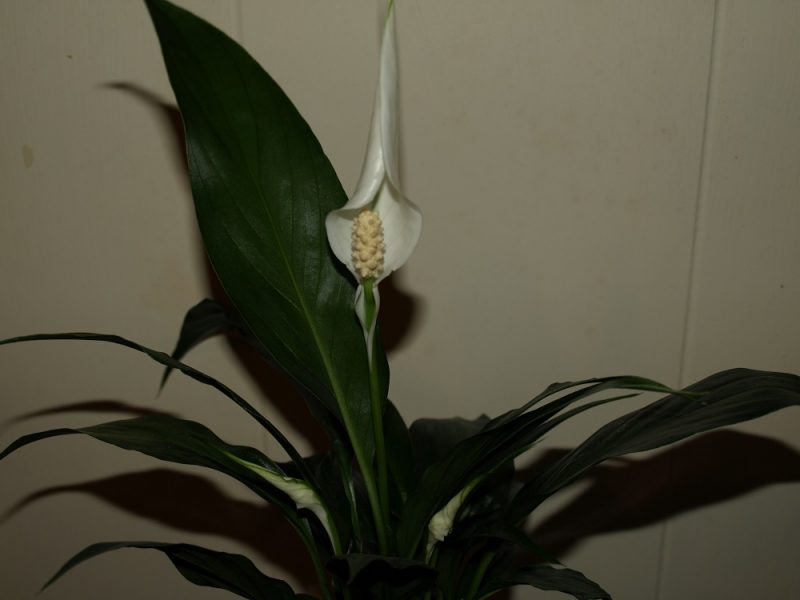 Unless you have dogs with killer instincts and random lizards hiding in the foliage, peace lilies (Spathiphyllum wallisii) make great houseplants. Mine was five years old when the aforementioned tragedy came to pass. The human involved took pity on the lizard and rescued it. The dog involved tore up the plant because she was convinced that the intruder needed to be dispatched immediately, no matter where it happened to be hiding. The result was that a beloved plant went to that great garden in the sky and its mortal remains went into the compost pile.

Lizard / canine attacks aside, peace lilies are a low maintenance plant. They don’t seem to mind situations with low lighting but they can get droopy if they’re not regularly watered. However, they typically perk back up after being given a drink. Mine was also in a terra cotta pot and was due for a transplant before its untimely demise, which might have negatively affected it as well. In fact, plastic might be a better container choice for peace lilies because the material retains water and it may help keep them from needing a drink every time you turn around.

A final word of caution: the ASPCA considers peace lilies to be toxic to both cats and dogs. Pet owners might therefore want to err on the side of caution, particularly if their furry friends are the sort that would enjoy sampling any leafy green fronds that just happen to be left hanging around. 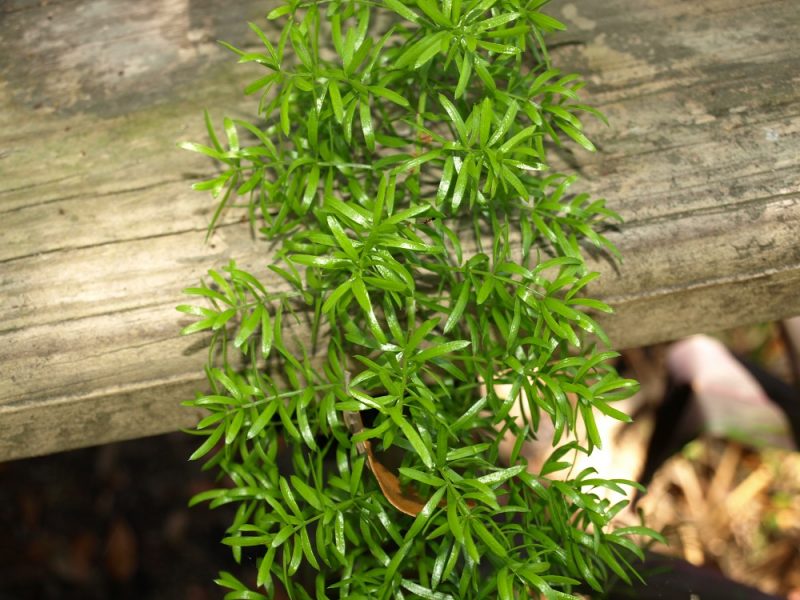 I’m not sure but my asparagus fern (Asparagus aethiopicus) could easily be the oldest plant in my garden. My cousin gave it to me at least six years ago, before she got married and had two kids. It has remained lush, green, and bug-free all that time. A little water and a little light is all it seems to need in order to thrive. This tough plant even survived a brief period of freezing weather in an unheated garden shed with absolutely no problems. I’ve gotten by with keeping it in the same medium-sized pot for at least four years with no problems. However, this is another houseplant that pet owners should keep away from hungry dogs and cats because of its’ reported toxicity. According to Wikipedia, asparagus ferns are also considered to be invasive in some locations, so definitely double-check to make sure it’s not considered a pest in your area before turning it loose in the yard.

Houseplants that Aren’t For Amateurs 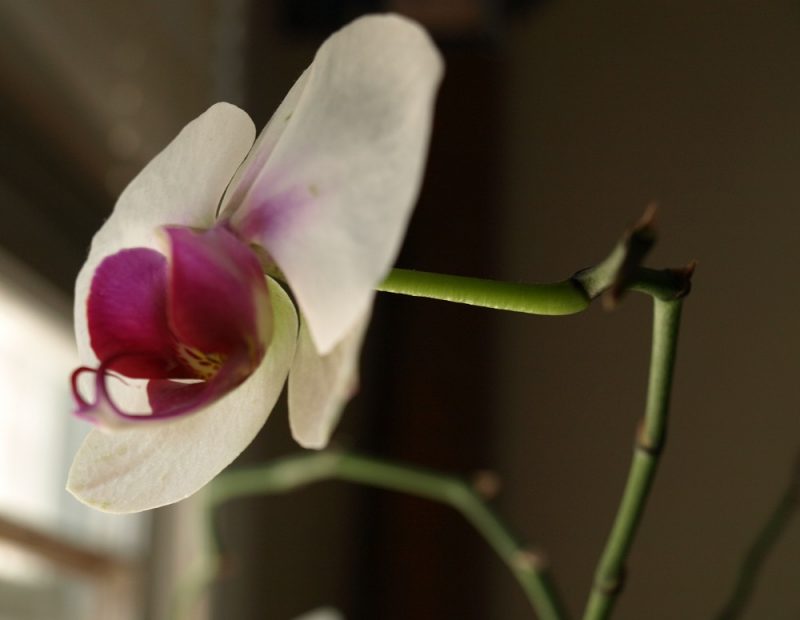 Of course, there are those plants that seem determined to drop dead despite your best intentions. Take for example, my moth orchid (Phalaenopsis species), which I bought when it was on sale at Lowes because I’ve always wanted one. It was trucking along just fine thanks to the bright ambient light in my room and weekly applications of specially formulated fertilizer that I bought for it. (Okay, I confess! I was using Miracle Grow but it doesn’t have to be organic since I’m not going to eat it and the bugs are leaving it alone.) I was even optimistic despite the fact that it had dropped a bloom and lost a leaf or two along the way. This was until it got warm enough outdoors that I could just leave my window open. That turned out to be a bad idea. Not only did the last sizable leaf fall off, the new leaf it was growing shriveled up to nothing and the stalks have begun to look dry and lifeless. I keep hoping it’s going dormant but am not optimistic. However, gardeners that have time to pamper these sort of needy plants, and the budget to kill a couple before getting it right, should go right ahead. As for the rest of us, we shall proudly stick to our idiot-proof houseplants despite our brown thumbs.