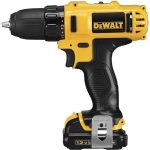 This may sound paranoid, but I’m beginning to seriously wonder if the people at DeWalt have mind-reading powers. Here’s why: a few months ago, my DeWalt cordless drill that I’ve had for ages had a bit of … a mishap. I had loaned ol’ Drillard to some friends who were doing renos and received a panicked call that went something like this:

“Hey, Jen, um, quick question – is it ok to put your drill in water?” she asked.

“I really, really wouldn’t recommend it. What happened?” I said, thinking about the possibilities. For whatever reason, my mind leapt to the image of my drill sitting in a toilet.

“Uh, we just had a little accident here – no one’s hurt or anything – but your drill is … well, it’s coated in concrete. I was hoping to try to wash it off,” she fessed.

Turns out poor Drillard had been knocked into a bucket of watery cement and no one had noticed until several hours later. After attempting to dry it out and crack the concrete off, it became quickly evident that Drillard’s days were done.

As the drill was mighty old and likely near the end of the line anyway, I didn’t ask for my friends to replace it. Instead when we needed to drill something, I used the crappy one my husband brought into the relationship – a loud, shall-remain-nameless corded drill. I quickly discovered that going from cordless to corded is like going from an iPhone to a rotary dialer. There was sulking, oh yes, there was sulking.

And then, out of the blue, the mind-readers good folks at DeWalt wanted to know if we’d be interested in reviewing their DeWalt DCD710S2 12V Drill / Driver Kit. Um, YES.

A few days later, Drillard Jr. is in my hands. It was like the skies had parted and a chorus of whirring angels were singing to me. So – onto the review! 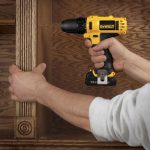 Here are the basic specs to know about the DeWalt 12V cordless drill and driver kit:

The first thing I personally noticed about the drill was how light it felt. It’s not a feather, but it’s not as heavy as you think it will be. For someone like me whose upper body strength is on par with that of a small child, this is pretty fantastic. The ergonomics are also great and very comfortable, in large part because of the textured, molded rubber handle that sits between the drill body and the battery. I also noticed straight away that the drill is well balanced. I’ve used drivers before that were so top-heavy that I’d sometimes have to use two hands to ensure I was keeping on course. That’s not the case with the DeWalt. 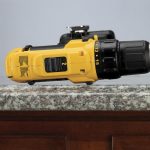 Two speeds are available on the top of the drill, directional change and lock are on the body, and the trigger responds very well to the amount of pressure you put on it. Whether you want to go soft and steady or fast and hard, you have all the control in your finger.

Changing bits is quite simple, and unlike certain corded drills, you don’t need to use that little key to open and close the chuck. Just hold the chuck and gently pull the trigger until you have the bit size you want. Flip it into the reverse to tighten and pull it back. Easy.

I spent part of the afternoon wandering around our apartment looking for things to drill. The first victim was a free board from our heinous engineered hardwood flooring. The DeWalt really didn’t need much in the way of pressure to drill a clean hole through the wood and handled placing a screw into the plank quite easily too.

Next up, I decided to test out my concrete bit to see how much pressure I need to use to drill a wee hole in our ceiling. The last time we had done this – to mount track lighting – our arms were sore from having the press the drill so hard – and our mouths were sore from all the swearing. This time, yes, I had to use a bit of arm power, but the DeWalt made fairly short work of the test and the ceiling got owned much, much quicker than last time. Excellent!

As for cons – and I’m being picky – there’s no warning when your battery is dead. After you’ve spent some time depleting the charge, the drill goes from seemingly 100% to 0% in mere seconds. Thankfully, this kit comes with a second battery, so presuming you’ve kept it charged, you can just pop another on and continue with your project. Also, depending on what you’re doing, the LED light can sometimes get lost in the drill’s own shadow – but it’s frankly better than nothing and not something to avoid this model over.

Overall, I’m very, very pleased to now have the DEWALT 12v Max Drill Driver – and you can bet I won’t be loaning it out to my lovely but accident-prone friends. Drillard Jr. is staying close to ‘mommy’. If you want a DEWALT DCD710S2 12-Volt Max 3/8-Inch Drill Driver Kit

of your own, we found it at Amazon bargain priced around $150.