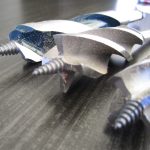 I like to think of drill bit evolution in the same way I think about bicycle evolution. There was a period of several decades where bikes pretty much stayed the same. Two wheels, a frame, no suspension, a handlebar, rubber pad brakes, etc. Then, out of nowhere bikes started sprouting suspensions cushier than a Cadillac, disc brakes, precision gear shifting, carbon fiber, and now, quite a few are even being motorized. Hurray for the bicycle! But this isn’t “velo-fixated.com”, so what about drill bits? Yup, they went through a dark period too. For all too long, bits were little metal rods with a spiral cut into them. Some were black, some were silver, and that’s about it for innovation. Like the bike, drill bits have evolved in recent years. Now, if you want to bore through wood fast (and who doesn’t?), there are quite a few options available. We’ll highlight a few from Bosch, Irwin, Milwaukee, and a newer entrant in the market, Renegade Tools.

Bosch
If you’re looking for an epic variety of bits, Bosch definitely has you covered. We’ve been pretty impressed with both their DareDevil and auger style bits. If you’re used to using standard spade bits, you should definitely check out Bosch’s DareDevil line. Bosch provided us with a set of them last year and we’ll reach for them without hesitation before grabbing a seemingly retro standard spade bit.

The DareDevil™ was designed to answer the needs of professional users in terms of speed, ease of use and hole quality. A first for spade bits, full cone threaded tip provides the speed needed to drill faster and it pulls the bit through the material with less effort and vibration than other spade bits.

Bosch also sent us a couple of their beefier NailKiller auger style bits. These bits are in a different category from the other bits in this article, but are worth mentioning since I did some speed testing just for kicks. The NailKillers are truly heavy duty, and in our completely unscientific muscle/gravity powered testing, we found them to be about a third faster than the fluted style bits from Renegade (more details on those below). We didn’t have a fancy drill testing rig like Joe The Pro from Bosch, so take those figures as very rough estimates. The NailKillers chomp through nails like a hungry bull through hay (how’s that for a city slicker simile?)! We also give them our “most likely to survive a thermonuclear blast” rating thanks to their rugged design. If you’re looking for the next step up in ruggedness from the other designs in this article, consider the NailKillers from Bosch (as well as other auger style bits from all the manufacturers mentioned here). 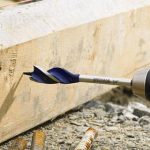 Irwin recently introduced their Speedbor MAX Speed Bits, which appear to be what you’d get if the Bosch Dare Devil had sex with an auger bit, and then the baby’s growth was stunted (anatomically it doesn’t work, but just go with me on this). The resultant stubbier offspring is a tri-flute design with a screw tip to help pull the bit through whatever wood stands in its way. We haven’t tried the Speedbor MAX personally, but we have used a similar design from Renegade (quad-fluted), more on that below. Interestingly, Irwin has one user review on their own site and it’s one star (that one star appears to be an anomaly, the Speedbor MAX bits are well reviewed on Amazon). Oddly, the review on Irwin’s site said “Awsome product, works great, just needs to be an inch longer.” I’m not sure what prompts someone to dock four stars on an “awesome product”, but apparently this fellow is a very strict grader. 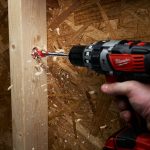 I had a chance to test out Milwaukee’s new-ish Speed Feed bits at their new product symposium last year and I was impressed. These bits are fast, very responsive to your guidance, easy to withdraw from the hole thanks to their tapered design and they cut a clean hole.

Speed Feed™ Self-Feeding Wood Bits are made for drilling fast holes in clean wood. The double wing spurs cut clean holes for feeding wire or bolts through, and the feed screw and dual cutting edges provide up to 10 times faster drilling vs. flat boring bits.

Their spurs help make for clean holes, but I’d steer clear of any nails with these. Definitely a very solid and high performing bit though. Highly recommended. 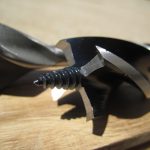 We first heard about Renegade at the 2010 National Hardware Show in Vegas (which they’ll be exhibiting at again this year), and they sent us a couple of their bits to check out after the show. Interestingly, Renegade claims to have “inspired” Irwin’s Speedbor Max bi-metal tip design during a booth presentation with Irwin reps in attendance. Both the Renegade and Speedbor bits appear just about identical, with the exception being that Renegade’s bits have four flutes and Irwin’s has three. Regardless of who actually invented the various components of this type of bit, the overall design is both innovative and performs well – producing fast, effortless and relatively clean holes.

Editor’s Note: Renegade contacted us after this article to clarify that they felt the bi-metal tip design was what was allegedly copied, not the overall fluted bit design. I invited them to post a comment below to provide any further clarification. I also edited the paragraph above slightly in light of this clarification from Renegade. 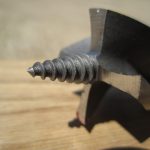 Renegade Tools has two versions of what they describe as “the world’s first four fluted auger bit” – one standard bit, and one bimetal version for greater durability and nail chomping prowess. In our unscientific speed tests, they both appeared to perform comparably, zipping through a 2×6 with relative ease in about 3 seconds on a corded drill. Unfortunately you can’t find Renegade’s four-fluted bits in US stores yet, but they’re working on it.

If you’re inspired to embrace the evolution in drill bits, you really can’t go wrong with any of the products mentioned here. They are all a big step up from standard bits and spade bits. For your shopping convenience, we’ve linked all the major products with Amazon links below (with the exception of the Milwaukee Speed Feed bits, which weren’t available on Amazon at this time). You can also pick up the Bosch DareDevil and NailKiller from our sponsor Ohio Power Tool. Happy drilling!