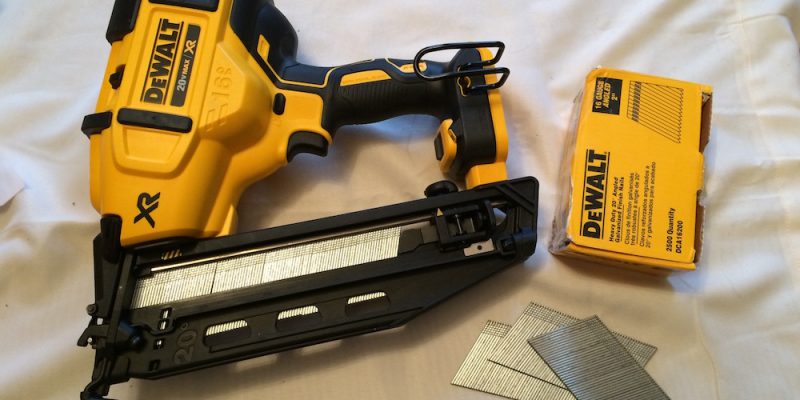 Ask a finish carpenter to name the most annoying part of his work day (aside from answering stupid questions), and it will likely involve a compressor. Lugging it in, finding power, untangling the air hose, oiling the nailer, and trying to avoid tripping over the hose as he drags it around all day. Not to mention the racket, as it randomly kicks on and scares the crap out of everyone in the vicinity. I’m not a finish carpenter, but I’ve installed a fair amount of trim, and messing with the compressor is definitely MY least favorite part of the task. That’s why, when the new DeWalt DCN660 Cordless Finish Nailer showed up at HomeFixated Global HQ, I licked it and called dibs on the opportunity to see if it has what it takes to replace a pneumatic nailer.

The DeWalt DCN660 evolved from DeWalt’s previous 16 gauge cordless nailer, the popular DeWalt DC618, that’s been around for a bit over ten years. So what’s new and improved? For starters, the new model is more compact, and almost 2-1/2 pounds lighter, weighing just 6 pounds including the battery. It’s powered by DeWalt’s 20V MAX line of batteries, instead of the 18V battery in the older model.

The biggest difference is the use of an efficient, brushless motor, similar in design to the one used in DeWalt’s popular DCN692 cordless framing nailer. Brushless technology is what allows the DeWalt DCN660 to be lighter, more reliable, and more powerful. Combined with DeWalt’s XR (Extended Run) Lithium Ion batteries, the nailer can go all day. Using the 2.0 Ah battery that comes in the kit, the 16 GA finish nailer can drive up to 800 nails per charge in sequential mode. Got a LOT of trim to install? According to DeWalt, their 5.0 Ah batteries are capable of driving up to 2,200 nails per charge in sequential mode. That should hold you ‘til lunch!

The DeWalt DCN660 Wants You To Be (Tool) Free

Knowing how frustrating it is to have a tool out of commission, DeWalt’s engineers set out to minimize down time by making the DeWalt DCN660 as user-friendly as possible. Loading the nailer is easy – drop a strip of nails in the slot at the rear, and pull back the follower until it catches. If one of those nails happens to jam, no problem. Tool-free jam release and tool-free stall release, which resets the driver blade without the need for tools, will get you bumping again in a flash.

The twin fancy schmancy high-tech LED lights on the DeWalt DC660 aren’t there just to help you install trim in dark, scary corners. They will also flash out secret codes to keep you informed. Left light blinks four times? Your battery is about to take a nap. Right light flashing continuously? Your nailer thinks it’s an 80-year-old driving in Florida. Either that or you’ve got a jammed fastener. Both lights on, motor runs, but failure to launch? Repair time.

But wait – there’s more! The DeWalt DCN660 has a fair amount of rubber overmold strategically located on its body. This helps make it more comfortable to use, while protecting the trim and the area you’re working in. The no-mar pad on the tip also helps keep your work surface lookin’ purty. A trigger lock helps prevent those “Oh, $#!^” moments brought on by an unintended nail launch. A reversible (or removable) belt hook allows you to hang the tool on a nail or other convenient hanging place – your belt, for instance!

A little while back, we bought an old farmhouse, which we are (very) slowly renovating. One of the first rooms we rehabbed was a bedroom. Like the rest of the house, it had 30-year-old carpet, the removal of which was at the top of the priority list. Unlike the rest of the house, this bedroom also had carpet on one of the walls. The previous owners claimed their cats loved it, and judging by the smell, I believed them.

As part of the renovation, we are repairing the walls where necessary and painting. Naturally, when we removed the carpet, which was glued to the walls, it destroyed the drywall, so we ended up replacing all of it. Since we are also replacing all of the trim in the house with oak, I also removed the trim from all the windows in the bedroom.

The wall was repaired and the painting was done, but I hadn’t gotten around to re-trimming the windows yet. Since my wife likes to put candle lights in the windows, she “requested” I get something installed to enable her to do it. Since I didn’t have time to fabricate all the trim, but I did still have the old trim we had removed, I decided to temporarily re-install it.

I located the old trim, which conveniently still had all the components attached to each other. I grabbed the DeWalt DCN660, and had all three windows trimmed out in about two minutes. If I had to drag out the compressor, fire it up, etc., I fear marital harmony might never have been restored…

A compressor malfunction (which is not nearly as exciting or controversial as a wardrobe malfunction) offered another opportunity to put the DeWalt DCN660 to the test. My friend Steve was trimming out the windows and doors in his garage when the seals in his compressor went kablooey. (He swears they weren’t being clubbed at the time). Anyway, the result was lots of air and noise, but very little pressure.

He was trimming everything out with 1X4” pine. I gave him the cordless nailer, a box of 2-½” nails, and no instructions. The remainder of the trimming went much more quickly (and quietly). He just bought a house that needs a LOT of trim work, some of it in rooms with 20’ ceilings; I’m thinking he’ll be willing to give the nailer a good, thorough extended trial.

DeWalt claims their cordless nailer has the oomph to put 2-½” nails through oak. I just happen to have a large quantity of ¾” oak, and I love a challenge, so I grabbed a scrap, set the DeWalt DCN660 to bump mode, and locked and loaded. I set the depth to the max, held the trigger, and banged about 40 nails in using “fast and furious” mode, back and forth along the scrap of oak. Buried ‘em all – no protruding nails, no jams, no waiting for the nailer to catch up.

Since the oak didn’t seem to faze it, I decided to tackle something a bit more challenging. My son is redoing his small kitchen, and is installing some Kempas wood flooring. On the Janka hardness scale, which measures the hardness of various species of wood, Doug Fir is rated at 660, white oak at 1360, and hard maple at 1450. Kempas comes in at 1710, making it harder than all of the above. We used the DeWalt DCN660 to nail in the first couple of rows of flooring, face nailing the edge closest to the wall, then tongue nailing everything. The nailer had no trouble, nicely countersinking every nail we shot.

The only issue I had while using the nailer was that, at some point in my rapid-fire nailing with the oak, I ran out of nails. It took me a moment to realize it, because the nailer kept banging away, making happy nailing noises. The DeWalt DCN660 doesn’t have a dry-fire lockout, so the nailer will keep firing away, even if it has run out of nails. Since the driver blade punches little holes in your material, it looks like you’re still nailing.

Admittedly, I was going much faster than the nailer would ever be used in the real world, and if you glance at the magazine, it’s easy to see when you’re getting low on nails. Additionally, the sound changes a little when the nailer starts shooting blanks. You’ll likely notice it pretty quickly, and it just means a few extra nail holes to fill. Still, a dry fire lockout is the one feature I would add to this otherwise excellent tool.

Ready To Lose The Compressor?

DeWalt’s goal with this cordless finish nailer was for it to be robust enough to be the primary finish nailer for contractors, remodelers, trim and finish carpenters, and cabinet makers and installers. I think they nailed it. The DeWalt DCN660 is well designed, solidly built, and easy and comfortable to use. It can shoot nails as fast as you can bump it along, and it can shoot a LOT of nails before you’ll have to give it a fresh battery.

The DeWalt DCN660 is available as a bare tool or in a kit, which adds a carrying case, charger and 2.0 Ah battery. In my humble opinion, the kit is well worth the extra money. I can always use an extra 20V MAX battery, and the nailer will shoot an impressive number of nails using the relatively lightweight 2.0 Ah battery.

More importantly, though, the DCN660 is not a cheap tool, and even though it’s pretty beefy, I want to protect it. The molded case that comes with the kit is designed to fit the DeWalt DCN660 perfectly, with or without a battery attached, and also provides storage for nails, the charger, and extra batteries. I was able to get four XR batteries and a box of nails in the case, along with the charger and nailer, and still had some cubbies available to tuck odds and ends into.

If you’re in the trades, or a serious DIYer, and you want to ditch the %#$@%&%! compressor (like my buddy Steve), you should take a serious look at the DeWalt DCN660. DeWalt makes that a no-risk proposition, with its 90-day, no-questions-asked, money-back guarantee. The nailer also comes with a solid three-year limited warranty and a one-year free service contract. 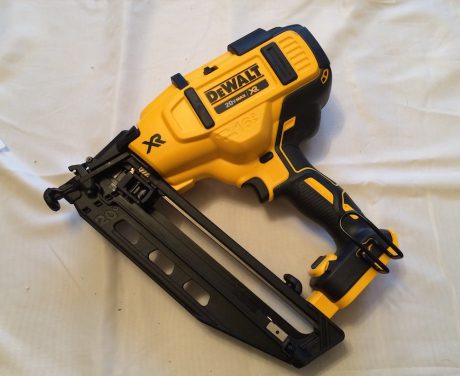