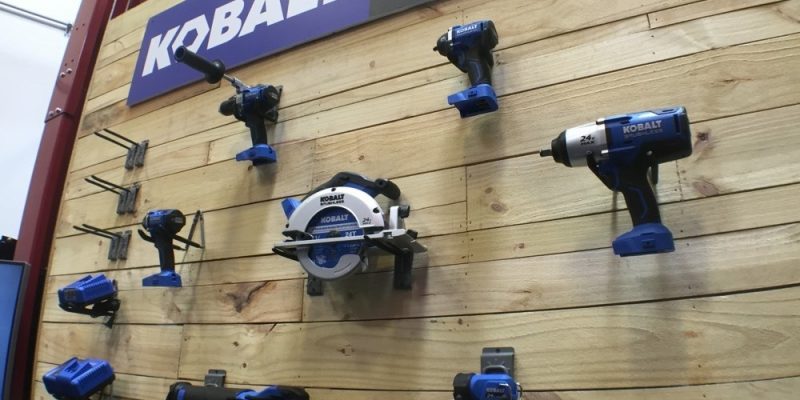 I recently returned from a fantastic media event with Kobalt tools. We not only had a chance to play with new tools, but Kobalt treated us to an amazing VIP experience at the Kobalt 400 Nascar Race and gave us a chance to take in some airborne sightseeing. Aside from attempting to keep us happy, the Kobalt team was VERY excited about their soon-to-be-launched line of 24v Max Brushless Power Tools. They are kicking things off with seven tools, most notably an impact driver, impact wrench, drill driver, circular saw and reciprocating saw. I had the chance to play with all the tools that are coming in June (several more are expected in December), and I’m happy to share my initial perspectives on this power tool line that Lowes and Kobalt are looking to entice pro’s with.

In case you haven’t been into a Lowes recently, Kobalt is the Lowes house tool brand, and has been in the power tool game for years now. In fact, we reported on their first big push into cordless tools back in 2011. Since then, we’ve covered some select Kobalt mechanics and hand tools as well as their growing lineup of Outdoor Power Equipment, (OPE). For the most part, much of the Kobalt product line has been oriented towards consumers. Kobalt is looking to shift that focus more towards pro’s with the new 24v Max Brushless Power Tools, although I’m sure they’ll be perfectly happy to sell them to non-pro’s too.

Kobalt 24v Max Power – Where Is the Extra Juice Coming From?

A cynical eye might look at the 24 Volt Max as simply the latest salvo in what appears to be an escalating war of the volts. From 18 to 20 to 24 volts, manufacturers don’t seem to shy away from stepping up the voltage on their cordless tools. With that said, does more volts equal better, stronger, faster or longer runtime? Not necessarily. Kobalt had several cordless tools from competing brands for us to compare the new Kobalt 24v Max too, and those tools were 18v tools. Despite a 6v difference on paper, those tools still held their own. The answer to the opening question about where the extra juice is coming from is simple: they added an additional cell to the battery pack. Despite that addition, the battery packs are svelte, and most users aren’t likely to notice much if any difference from a more typical 18v battery pack.

It’s clear that Kobalt is taking a few cues from their competition in their approach to these tools. The 24v Max tools mostly felt good in my hands, thanks in part to nice, compact, ergonomic grips, not unlike those we first liked with DeWalt’s cordless drills and drivers. One of their engineers told us they 3D printed 19 different versions of the battery release buttons before they felt satisfied. That kind of attention to detail is critical in getting the fit and finish of a power tool right. Oh, and those release buttons felt good!

The Kobalt Drill / Driver performed briskly and we liked that Kobalt included a “Finish” setting for their impact driver which shuts the driving action down shortly after impacts are engaged. The finish setting enables you to avoid overdriving screws, and did a nice job of perfectly dimpling drywall screws, without the need for a special nose-piece on the driver. The finish setting turns off after 15 minutes, which will likely help some users and possibly annoy others. Timer aside, it’s a great feature, making the tool much more versatile than it would be without it.

New @KobaltTools 24v Brushless Drill/Driver with a 1" bit takes down a competitor with 3/4" bit pic.twitter.com/zxbjNT0IAP

The one exception to what we said above about nice, ergonomic grips would be the Kobalt 24v Max recip saw. Maybe I’m spoiled with the Milwaukee Fuel Sawzall’s killer overmold (which some accused us of being a little too obsessed by), but the Kobalt’s overmold felt more like a thin housing cover than a sculpted grip that not only feels good in your hands but is likely to stand up to some major abuse during demo jobs. Even so, the Kobalt 24v Max recip wasn’t bashful about cutting briskly and with plenty of power. It breezed through wood, pvc, thin wall tubing and even steel pipe. While their previous generation let you switch between orbital and straight back and forth strokes, the new brushless model ditches the orbital and just goes for fast 1 1/8″ strokes. I didn’t miss the orbital setting in playing around with the tool.

One standout to me was the new Kobalt 24v Max Brushless Circular Saw. These were my initial thoughts after using the first generation of Kobalt cordless circular saws several years ago, “I found it pretty easy to track the cut line with the 18v Lithium Ion Circular Saw. Unfortunately, the beefy 3/4″ plywood we were cutting is just about on the cusp of what this tool is really meant for. I did find the tool bogging down several times, which made the task probably better suited for the new Kobalt Corded Circular Saw.” Not exactly a raving review, right? Kobalt wasn’t afraid to show some of their prior Kobalt cordless tools, and testing them side-by-side was a strong testament to how far they have come. While their previous cordless circular saw lacked the power needed to tackle serious cutting, the new 24v Max Brushless circ saw sliced through triple-stacked plywood without bogging down. This new saw has come a long way, and it held its own against heavyweights like the Milwaukee Fuel.

Have a few wheels to change? While you might not be able to do it quite as quickly as the Lowes pit crew, handling lug nuts or some repetitive mechanical tasks is well within this new Impact Wrench’s wheelhouse.

What Next in the Kobalt 24v Max Lineup?

Although I didn’t see them in person, Kobalt has plans to expand this product line substantially. The next additions in the 24v Max line are expected to be a hammer drill/driver, an angle grinder and, of course, an oscillating multitool. You can anticipate these hitting the market sometime around December of 2016, with more tools to follow next year.

If you’re a current owner of Kobalt cordless tools, you might be excited by the expectation of breathing new life into your older tools with the new 24v Max batteries. Unfortunately, despite sharing a similar slide-pack design, the new 24v Max Batteries are NOT backwards compatible. Given that this is an entirely new line of brushless tools, I can’t say I was shocked to hear this. Even so, the news might be a disappointment to some Kobalt users. I think the design and performance built into the new lineup will likely entice many users to upgrade entirely.

Despite being given great access to the new tools and the Kobalt team behind those tools, one thing we weren’t given access to is pricing. There were a few hints though, and I would expect Kobalt’s pricing to come in lower than the 18 and 20v pro-oriented power tools of their competition. It will be very interesting to see not only their price points, but also what inroads Kobalt is able to make when it comes to winning over pro’s wary of straying from their yellow, blue, and red cordless tool systems. I think Kobalt has a tough challenge ahead of them in the pro market, but not an impossible one given the impressive performance we saw from the new 24v Max lineup. Stay tuned to Home Fixated for more reviews and details!