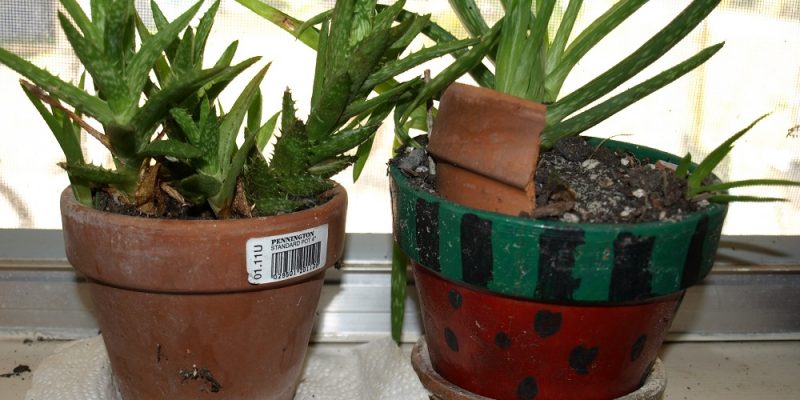 While spring may have gotten underway in some parts of the country, others are feeling what is hopefully the last set of wintery blasts before warmer temperatures start appearing. If you simply don’t have the time at present to commit to larger projects or the weather isn’t cooperating with your plans, why not start a quick and easy windowsill garden?

Of course, you are going to need a windowsill with a ledge that is big enough to hold a 4 inch pot but the larger the sill, the better for obvious reasons. Provided you don’t kill them, plants obviously will grow some. You can even extend the existent ledge using wood planks and bracers but that’s a project for another time.

As is the case with any gardening project, you’re also going to need a suitable container(s) and potting soil. Recycled soil is okay in a pinch as long as the plants you were growing in it previously died of perfectly natural causes such as a killing frost or annuals that exceeded their life expectancy. In such cases, it’s probably a good idea to sprinkle in some fertilizer just to up the nutrient quality.

If you have any doubts about the old soil you plan on using, resist temptation. Throw it away and start fresh. There’s nothing more depressing than killing an entire set of new plants because your soil was harboring some weird funk. New potting soil is also recommended if you’re growing plants that use a special mix like orchids, CPs (carnivorous plants), or cacti. This will enable the specimens in question to get what they need without resorting to the tricky business of mixing up various components.

You don’t have to fully disinfect or even scrub up old pots for every new plant you purchase but it’s always a good idea if you have doubts regarding the demise the former occupants. Speaking of containers, I really like terracotta (as you can no doubt tell from the photos) for its classic but low maintenance look. Incidentally, if you take a notion to spruce up your containers with paint, for the love of all that’s holy, use a light color! Black pots will absorb heat and probably fricassee your plants particularly if you live in the South.

Still, decorative plastic containers might be a better choice than terracotta or ceramic since I’ve found that indoor plants seem to suffer more abuse than the ones left outside. These containers are also going to have to be small enough to fit on the windowsill in question and also hold the specimen of your choice. Terracotta can also be porous, causing potential moisture issues on your ledge. 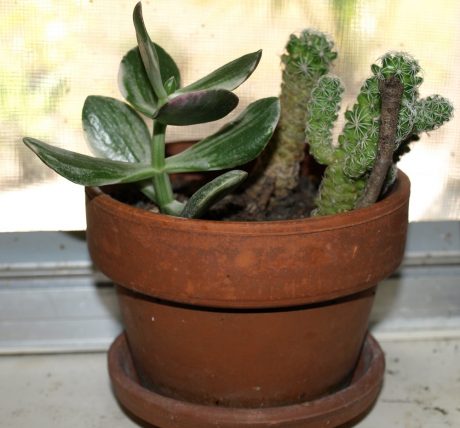 Small specimens of any kind are good for windowsill gardens simply because they fit on the sometimes precariously narrow ledges. A lot of chain garden centers sell tiny little succulents for a couple of dollars apiece. These work great for our purposes because, except for aloes, most of them don’t grow very fast. Two or more may even fit comfortably in a 4 inch pot (see the photo). With the exception of borage, which gets very large, most annual herbs will also be just fine in small containers particularly if they’re started from seed in the container you’ll be using.

You’ll also want to be sure that your windowsill gets enough sun for the plant you have in mind. Herbs, succulents, cacti and most CPs like lots of sun. Orchids, dracaenas, and African violets like a touch of sun but mostly do okay in the shade. However, if you get something fragile or expensive for your windowsill garden just avoid putting it in high traffic areas. Get a hardy, affordable plant particularly if it’s going to be spending life on a windowsill located in a high traffic area like the kitchen. My roommates have knocked over the plants there more times than I can count.

About once a week, I get up in the morning to microwave hot cocoa and find my plants upended in the sink or haphazardly slapped back in their pots by someone who was probably running late already. Then there was the incident with the humidity-loving plant I tried to put on the back of the toilet that ended up doing a swan dive into it, complete with broken pottery shards and lots of screaming. Dainty flowers need not apply in such circumstances. If you must indulge, save these specimens for places like your home office or your bedroom where they’re more likely to be safe from careless buffoons.

Saucers are a godsend, particularly if anyone in your household has OCDC tendencies about things like water rings and dirt marks in places they’re not supposed to be. I’ll admit these people have a point. It’s hard to get your rental deposit back when the hardwood floor has a suspicious line of perfectly round markings where your plants spent the winter. Although when the large freezer malfunctioned and then my dog decided the backdoor lintel was his favorite toilet, it was already a lost cause.

The good news is that saucers for your potted plants are fairly cheap. The tinier, flimsier plastic versions are usually under a dollar and some are merely chump change. However, the nicer terracotta or ceramic version will undoubtedly cost more but they do have an aesthetic appeal that the plastic ones obviously lack. The plastic ones are still worth considering because they can handle being dropped on the floor without damage even if the plant in question can’t.

Once your garden specimens get too big for their pots, you’re going to have to transplant them to keep from losing them. The trouble is that most plants will eventually get too big for containers that can be comfortably wedged on a windowsill. However, you can move the big kids to a nightstand or a low dresser that is situated under a window so that they’re still getting enough light. There are a few herbs that I haven’t found to be a problem in this regard. Basil, parsley, and tarragon generally get along just fine in 6 to 8 inch pots at the most. However, up north where tarragon is actually a perennial, it might actually be like rosemary typically is and not be able to survive in confined spaces.