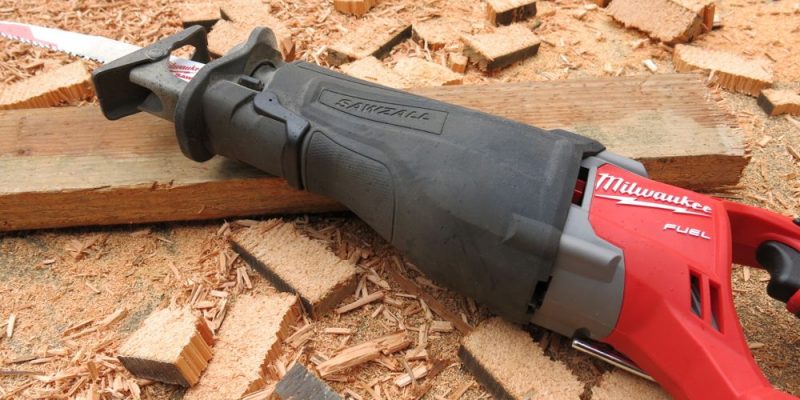 Once the domain of solely corded tools, reciprocating saws no longer need to be tethered to a wall outlet. Despite this transition, going cordless typically meant some pretty serious compromises in terms of power and battery capacity. We think the Milwaukee M18 Fuel Sawzall pretty much eliminates those compromises, leaving little compelling reasons to go corded, with the exception of cost considerations. Milwaukee sent their new M18 Fuel Cordless Sawzall our way and we’re excited to share our review with you (both written and video).

I’ll go into more detail in the written review below, but for a quick overview for you visual folks, check out the official HomeFixated video review:

I first got my hands on the M18 Fuel Sawzall at a Milwaukee Tool media event last summer. Milwaukee staged a showdown between the Fuel Sawzall and numerous corded competitors. That’s right, a cordless saw competing against corded rivals, at a media event. Insanity, right? Not when the cordless version spanked the corded saws! Amazingly, the M18 Sawzall cut through a smorgasbord of construction material like a sharp machete through an over-ripe zombie.

The M18 Fuel Sawzall weighs in at a solid 8.9 pounds. That doesn’t put this tool in the featherweight category, but if you’re slinging this tool with two hands it’s very manageable. The weight is still comparable to many of its rivals, both cordless and corded. It features a stroke length of 1 1/8″, with 0-3000 SPM (strokes per minute). If you’re buying the kit (as opposed to the bare tool), you’ll be getting one or two 4.0 AH M18 batteries to fuel your reciprocating swath of destruction.

Quik-lok blade changes are secure and hassle free. The Quik-lok features a spring loaded slide that rotates around the front end of the tool. You can put the blade in forward or reversed, but not sideways like some more yellow-hued recip competition from DeWalt. The spring action on the Quik-lok is pretty heavy, but it definitely inspires confidence in terms of a secure lock, and the risk of accidental blade release is pretty close to zero.

The M18 Fuel Sawzall also comes with a very handy Rafter hook. This is a great addition to the tool, and anyone that’s working above ground level will appreciate being able to hang up the tool when needed. Even if you’re working on terra firma, the rafter hook comes in handy for temporarily stowing the tool off the floor. If you want to look like a bad-ass recip gun slinger you could even hook it on to your tool belt (HomeFixated’s legal team strongly discourages this due to a slight risk of accidental dismemberment, despite an onboard safety switch). 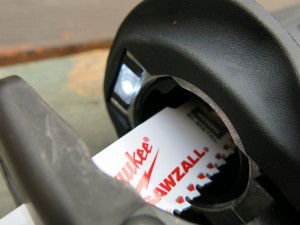 The M18 also sports a single headlamp, also known as an LED bulb. While the solitary LED isn’t going to melt anyone’s eyeballs, we think it’s a welcome feature on a tool that often gets used for demolition and in dark, spooky places. We always recommend a well-lit work environment, but even if you’re doing demo on a structure with the power off and you have a portable work light in place, shadows in those nooks and crannies can make it tough to see.

As part of the Fuel lineup, the Fuel Sawzall utilizes a brushless motor to maximize runtime. We ran the M18 Fuel Sawzall with a fresh 4.0 AH battery and found it delivered plenty of juice. I was able to make over 80 consecutive cuts through a 2×4 with a pretty aggressive blade. I adjusted the shoe once part way through to use a fresher set of teeth on the blade. Obviously your mileage will vary depending on the type of blade you’re using and the type of material as well. If you’re doing a major demolition project which amounts to non-stop recip saw use, you’ll want a couple batteries and a charger on standby. If you’re just tackling a few plumbing, electrical or minor remodeling projects, a single battery shouldn’t even break a sweat, and could last through a day or more.

The M18 Fuel Sawzall features a more streamlined look and feel than it’s 2620 model predecessor. It’s Batman-esque over-mold looks a bit like they paid their product designer in proportion to how much of the tool got covered in armor. The result is great though, the over-mold protects most of the tool from the inevitable abuse the front end of a recip saw takes. It also gives you a number of secure ways to grasp the tool, whether you’re putting weight on the top of the tool, or pulling it through a cut with the blade reversed.

One thing we would have liked to see is a more forgiving grip/handle at the end of the tool. When using a reciprocating saw, there are inevitably times when the blade starts to bind and rather than it reciprocating, the whole tool reciprocates (and you along with it). I found the handle at the end of the tool (not the big over-mold by the blade end), to be pretty hard and unforgiving. If you’re using the tool for long periods of time, some good gloves are definitely worth considering.

We did really like the pivoting, adjustable shoe at the base of the blade. Not only is it easy to slide in or out thanks to a lever you can access from either side of the tool, but it also sports a pivot that makes it easy to keep good pressure against your workpiece, even when rocking the tool and changing your angle of attack. Keeping that shoe firmly in place often helps with the aforementioned issue of you, and not the blade, doing the reciprocating. 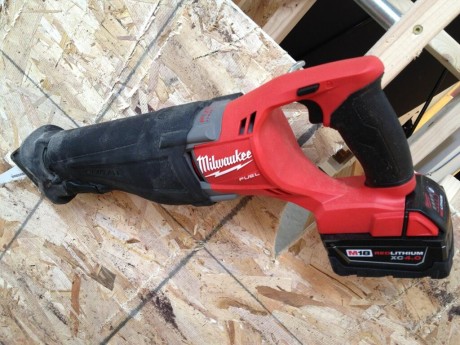 We started off this review saying there are few compelling reasons to go corded when you consider the performance and cordless convenience of the M18 Fuel Sawzall. The one glaring reason is price. If you’re already a member of the growing Milwaukee M18 family, then a bare tool isn’t dramatically more than a solid corded version. However if you’re comparing a one or two battery kit to a corded sawzall, it’s far less expensive to go corded. If you’re a serious Sawzall user, or just have to have the hottest tools on the market, the M18 Fuel Sawzall is an easy decision. If you’re a more occasional user, or if budget is the main consideration in your purchasing decision, then a corded cousin may make more sense for you.

For folks that rely on their Sawzall day in and day out, we highly recommend this tool. The Milwaukee M18 Fuel Sawzall somehow manages to meld the power and performance of a corded tool with the flexibility, efficiency and convenience of a cordless. We’d love to see two identical, large demolition projects, one attacked by a corded Sawzall, the other by the M18 Fuel Sawzall. Just the continual hunt for new outlets to plug into would slow down the corded version. We’d imagine it would be no contest, with the Fuel-wielding pro warming a seat at the local pub long before his corded rival.

You can find the Milwaukee 2720-20 M18 FUEL SAWZALL Reciprocating Saw in a bare tool, or 2720-22 kit configuration (which includes case, two batteries, and a 12v/18v combo charger). Street pricing ranges from about $199 for the bare tool to $399 for the two battery kit. Available via:

Buy Now - Tool Only via Amazon