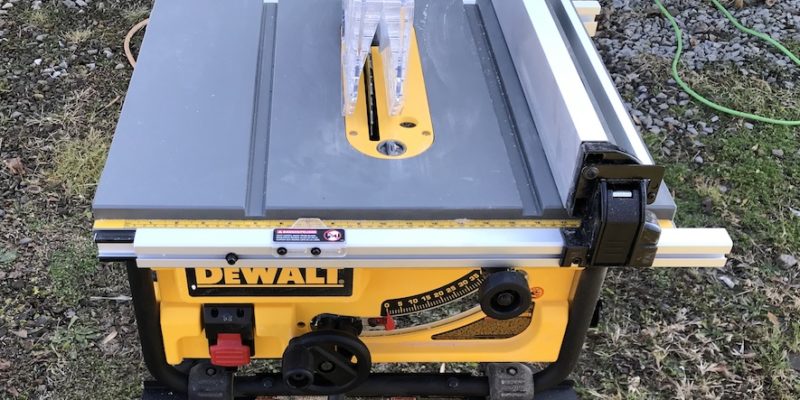 This post is sponsored by The Home Depot. When you have sheet goods, dimensional lumber, or trim to rip, nothing beats the speed and accuracy of a table saw. The downside to table saws? They’re table saws. They tend to be big, bulky and heavy. This isn’t an issue when you’re working in your shop, but if you have to schlep a saw to various job sites, or you have a small shop, you’ll soon be looking for a more portable solution. The Home Depot is currently offering a special buy on the popular DeWalt DW745 portable table saw, along with the sturdy DeWalt DW7451 stand. For $299, you can pick up the Yellow and Black duo, aka the DeWalt DW745S combo, for just a few bucks more than you’d normally pay for the saw alone.

Just because the DeWalt DW745S doesn’t weigh 300 pounds doesn’t mean it’s a wussy saw. It’s very robustly built, well-protected by a metal roll cage, and the 15-amp motor has plenty of power to slice through a variety of materials. It can make bevel cuts up to 45°, cut through material up to 3-1/8” at 90°, and has the same safety features you’d expect on a larger saw. Here’s the lowdown from DeWalt:

When the DeWalt DW745S Compact Saw arrived, it landed on my porch in a fairly large box. I sighed, and mentally prepared myself to devote a couple of hours trying to decipher how A37 fits into G12 via H43. Inside the big box were two more boxes – one containing the saw itself, the other the DW7451 saw stand, complete in its retail packaging. I decided to tackle it first. It was fast and easy: Slide the lower leg extensions into the upper frame, and connect each leg with one bolt. Five minutes later, it was finished; it was sturdy, and I was happy.

Then it was on to the saw. I slid it out of its box, took off the plastic, and was very happy to discover that the saw was almost fully assembled! The fence clamps quickly into place, and no tools are needed. The blade and riving knife were already installed, and other than the anti-kickback pawl and the blade guard, which remove quickly for storage and transportation, the DeWalt DW745S Compact Saw was ready to go.

I brought the saw outside to finish the setup. At only 45 pounds, it’s pretty painless to schlep around, and the built-in handholds make it easy to get a good grip. I mounted the saw to the stand, using the four bolts and nuts that came with the stand. The saw fit perfectly on the stand; the holes line up just like they should, and a couple of minutes later it was stable and good to go.

Note: The saw will fit on the stand facing in either direction, so you have to pay attention when mounting it. The legs extend a bit further on one side than the other; you’ll want the shorter legs facing the controls, to help prevent tripping. Being a graduate of the “we don’t need no stinking directions” school of thought, I naturally assembled the saw without glancing at them. Backwards, of course. I later reversed the process, which only takes a couple of minutes.

Clearly, DeWalt put some thought into the design of the DW745. No tools are needed for any adjustments to the saw, other than blade changes. The accessories, with the exception of the miter gauge, all have designated on-board storage space. The oversized power switch is easy to use, and it’s easy to adjust the bevel and blade height.

Since my garage is packed to the gills, and my newly-built shop has no power yet, I set up the saw in the driveway to make some test cuts. Before using the DeWalt DW745S Compact Saw, I checked the blade for parallel alignment with the miter slot, and to make sure it was perpendicular to the table with the bevel set at 0°. I also checked the scale on the rip fence. Everything was dead on, right out of the box.

The rip fence on this saw is a pleasure to use. It adjusts quickly and easily by turning a knob, and the rack and pinion gearing move the fence back and forth along the table very smoothly, keeping the fence perfectly parallel to the blade. When the fence is where you want it, flipping a lever on the side of the saw locks it very firmly in place. The fence extends to the right far enough to make a 20”+ rip, and a built-in support for longer pieces flips back behind the fence when not in use.

I recently installed several new windows in an old farmhouse I’m renovating. The walls vary in thickness, which makes trimming them out a treat. I’m using oak for all the trim, and spacers are needed between the window frame and the casing. The two windows in the kitchen needed some 1/2” filler strips, so I set the rip gauge to 1/2”, double checked it with my tape, and fired up the DeWalt DW745S.

The saw started and ran smoothly, and I fed the eight-foot piece of oak through several times, until it was transformed into a pile of filler strips. I then fed a small piece of plywood through. The saw had no trouble at all with any of the cuts.

Let’s Be Safe Out There!

Before cutting the plywood, I installed the two safety accessories that come with the DeWalt DW745S set. As with any tool with a sharp blade spinning at several thousand RPM, this compact saw needs to be treated with respect – assuming you’re fond of all ten of your fingers. The saw comes with an anti-kickback pawl and a blade guard, neither of which requires tools for installation.

The anti-kickback pawl does just what you’d expect: it helps prevent the saw from kicking back a workpiece toward the operator. Kickback happens most often when the workpiece binds between the blade and the rip fence, causing the blade to propel the workpiece. This can happen quickly, and with incredible force; here is just one of many scary examples available on YouTube:

The pawl that comes with the DeWalt DW745S set is fast and easy to install. It stores in a little cubbyhole on the side of the saw. To install it, just press in the spring-loaded stem on the pawl, slide it into its slot on the riving knife, and release the stem.

The blade guard is equally easy to install. Stand it up, hook the pin on the rear into the slot on the back of the riving knife, tilt it forward and press down so it’s parallel with the table, then push down on the locking lever. Both safety accessories are equally easy to remove for transportation or storage, or for when making cuts where they’d be in the way. It’s a good idea to use them whenever possible – BE SAFE!

Ready To Take A Stand?

The DeWalt DW745 has been around awhile; there are hundreds of good reviews. It has long been a popular saw for pros on the job site, as well as DIYers and home workshops. The saw is sturdily built, works well, has some great features, and is very reasonably priced. It’s also very customizable; take a look on YouTube, or do an online search, and you’ll find plans on how to build custom outfeed tables, integrated stands, fence extensions, and lots more.

The thing the saw gets dinged for the most is its miter gauge. It’s not the beefiest one out there, but it can certainly get the job done. If you prefer something more robust, there are after-market replacements available for around $20 and up. If I were a serious woodworker (something no one has ever accused me of), I might make the investment. There are also online instructions on making your own – that could be your first project!

If you’re in the market for a sturdy saw that’s easy to transport, the DeWalt DW745S set would be an excellent choice. At its current price of under $300, including the sturdy DeWalt DW7451 stand, the supply likely won’t last long. DeWalt backs the saw with a three-year limited warranty, one year of free service, and a 90-day money-back guarantee. Go put your money on the yellow and black table, and take your stand! 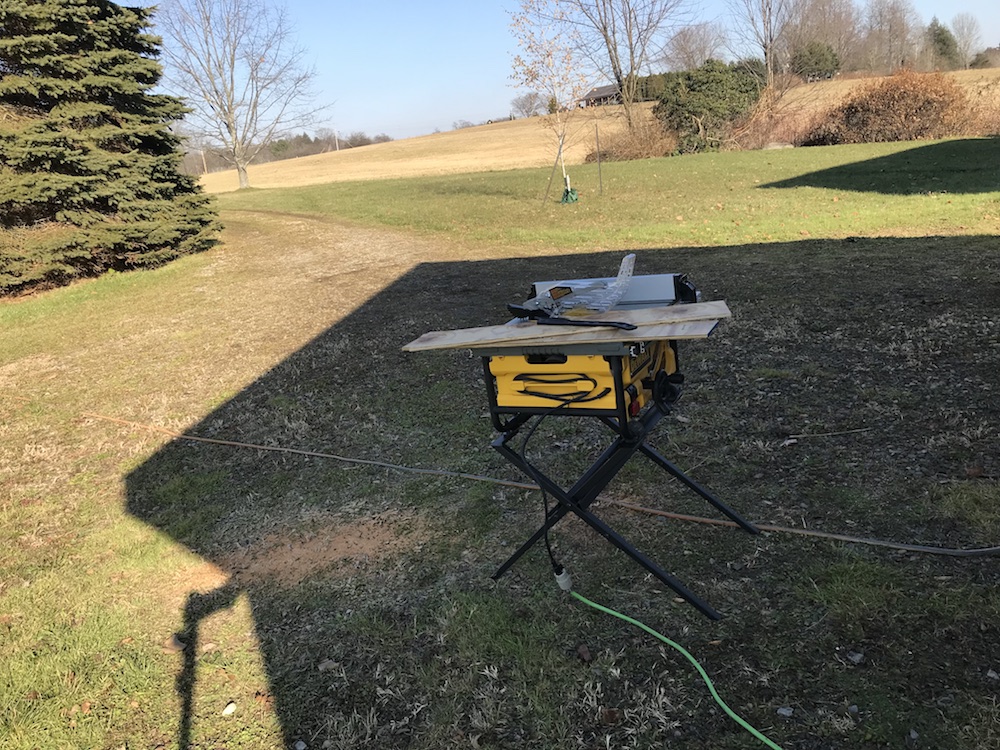 Buy from Home Fixated sponsor Home Depot for a mere $299: