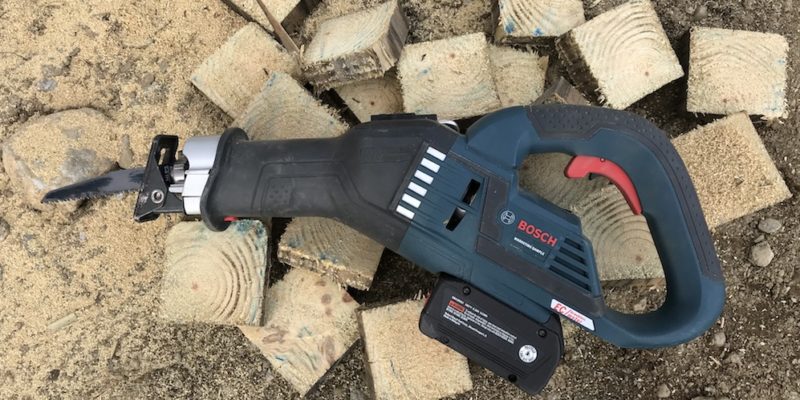 Plumbers, carpenters, remodelers, electricians…Anyone who needs to make fast cuts in a variety of materials knows the value of a reciprocating saw. Having a powerful recip saw used to involve being tethered to an extension cord. Over the past few years, though, advances in battery technology and brushless motors have led to cordless models with power equal to or exceeding that of their corded cousins. Until recently, most recip saws looked pretty similar in size and shape. Bosch decided to come up with a new angle, and recently introduced the Bosch GSA18V-125 Reciprocating Saw.

The saw also features an efficient EC Brushless 18V motor, a 1-1/4” stroke length, and variable speed of 0-2,500 strokes per minute. And there are plenty of additional features; here’s the full list of features and specs from Bosch. Feel free to read through them, or skip to the end of the list, and rock out to the video version from Bosch:

The first thing you notice about the new blue reciprocating saw is the shape. Traditionally, reciprocating saws have been pretty much a straight line from front to back. The Bosch GSA18V-125 dives downward at the front. This isn’t just a cosmetic feature; the angle shortens the length of the saw, allowing easier access to tight areas. It also makes the saw comfortable to hold.

Additional user comfort comes in the form of lots of rubber overmold, both in the large, rounded handle and the front support area. The Bosch GSA18V-125 also makes use of vibration control counterbalance technology to limit vibration. That technology, combined with the tool’s relatively light weight (7.7 lbs. bare, just over 9 lbs. with battery), make life a bit more pleasant when the saw is used for extended periods.

The oversized trigger on the Bosch GSA18V-125 is very user friendly. There’s a small safety on the front of the trigger; when you pick up the saw and put your finger on the trigger, you just have to nudge the safety forward a bit. I got used to it quickly, and found it much easier to use than the safeties on some other reciprocating saws. The combination of the variable speed trigger and a maximum-speed adjustment dial gives the user excellent control over cuts in any material.

Blade changes are fast and easy on the Bosch GSA18V-125. Flip up the lever near the blade, slide the old one out, slide the new one in, release the lever, get to work! Blades can be inserted in either orientation. Another handy feature is the adjustable shoe. It can be used to keep you from penetrating too deeply into a wall, or adjusted to extend the cutting surface and prolong blade life.

But wait – there’s more! The Bosch GSA18V-125 also features a large, sturdy rafter hook. It folds out to allow you to hang it on a sawhorse, joist, or the mirror of your buddy’s truck, and folds snugly out of the way when you’re hard at work. There’s also a pair of LED lights, one on either side of the blade, for those dimly-lit (aren’t they all?) demo sessions.

Finally, the folks in blue protected all that power and functionality with a bit of technology. The Bosch GSA18V-125 features proprietary Electronic Cell Protection (ECP) that protects the battery against overload, overheating and deep discharge for longer life. To protect the motor from overload, Bosch incorporated something called, strangely enough, Electronic Motor Protection (EMP).

The Bosch GSA18V-125 will run on any Bosch 18V battery, but is designed to take full advantage of the new Bosch CORE 18V 6.3 Ah battery. Billed by Bosch as “The best-built battery on the planet (vs. leading power tool competitors),” they claim the Lithium-Ion technology in the CORE 18V battery produces 80% more power than previous cells, with only a 30% increase in cell size. The battery also makes use of CoolPack 2.0 technology, which provides up to 135% more cooling effect than batteries without it. Here’s a short, music-free tutorial video from Bosch on their CORE 18V battery:

I first used the Bosch GSA18V-125 to tame an out-of-control area of our backyard, at my wife’s “request.” We had a tree that was trying to take over the world, and another area near a fence, where a neighbor’s vegetation was relentlessly invading. I slapped the CORE battery into place, and went out to do battle with Mother Nature.

Although pruning trees and brush isn’t what the Bosch GSA18V-125 was designed for, its power and compact size make it perfect for that sort of task. Tackling the tree first, I was able to slither through the tangle of limbs, and quickly had a pile of branches, and a tree that was once again recognizable as a tree.

Moving on to the vegetation by the fence, I slashed and sliced my way through the jungle. The more compact size of the Bosch GSA18V-125 make it easy to control, even one-handed, and I soon had a massive pile of brush. And we could see the fence for the first time in months!

The Bosch GSA18V-125 got to experience a bit more of the great outdoors, when I loaned it to a neighbor who was trying to dig out some roots to repair a retaining wall. He was very happy to see the Bosch arrive, after spending a couple of hours hacking with limited results with a pickaxe and small trowel. The Bosch did some digging in the dirt, and was able to quickly sever many of the problem roots. Not the best thing in the world for the blades, but a whole lot easier on the back!

Barnyard Action With The Bosch GSA18V-125

The Bosch GSA18V-125 also saw some action inside a two-story barn that was scheduled to be torn down. The flooring was all 1x12s, and I wanted to salvage a bunch of it. I put the blade to work cutting through the flooring near the walls, including some that was covered with rolled roofing (who knew it was a flooring product)! I also used it to dismantle several built-in shelves constructed using 2×6’s and 3/4” plywood.

After the barn was torn down, the Bosch GSA18V-125 helped clean up the remains of an above-ground pool that had self-destructed. The balmy 30 MPH breeze off Lake Erie somehow got under the cover and started whipsawing it around, until finally one end of the pool collapsed. We’ll miss it next July, but on the day I tore it down the temps were in the 20’s, and the remaining couple of inches of water in the bottom of the pool were frozen solid.

The support posts were attached to the top rim of the pool using sheet metal screws. I was able to get a lot of them out using an impact driver, but some were so badly corroded the bit wouldn’t seat in the slots. I was able to convince all the remaining rusted fasteners to dive on outta there, thanks to the persuasive abilities of the Bosch GSA18V-125.

The side walls of the pool were made of thin corrugated steel. It was fairly awkward to deal with, especially since I was doing the entire project alone (where were all those summer swimmers?!). I used the Bosch GSA18V-125 to cut the sidewalls into a few bite-sized chunks to get them out of the way, then sliced them up later into manageable pieces to fold and remove. Much of the time I was holding up the steel with one hand, and cutting with the other. Fortunately, the Bosch ripped through everything quickly, and was pretty easy to control.

To give the Bosch GSA18V-125 something more challenging to chew on, I grabbed a 4×4, set it on sawhorses, and let ‘er rip. I only had a short blade available, but the saw ripped steadily through several cuts. It maintained a steady speed through all the cutting, never straining or bogging down, and actually seemed to cut fastest when the orbital control was set to “1”. There was a lag screw stuck in the 4×4, probably 3/16” in diameter; the Bosch Edge demo blade ripped right through it.

Altogether, I used the Bosch GSA18V-125 over a period of several months, on several projects. Cutting everything from 2x4s to tripled-up 2x10s to sheet steel to 2” galvanized pipe, the saw never came up against anything it couldn’t handle with ease. It’s comfortable to use, easy to control, and has loads of power. It looks and feels very robustly built, a true pro-grade tool.

And pros are clearly the intended market; this saw would put a pretty good dent in the budget of a DIYer or homeowner. Suggested retail for the Bosch GSA18V-125 is $299 for the bare tool, or $399 for the kit with CORE battery and rapid charger. I’ve long been a proponent of getting the best tool you can afford, and if you’re a pro looking for a very capable reciprocating saw, check out the angles on the Bosch GSA18V-125. 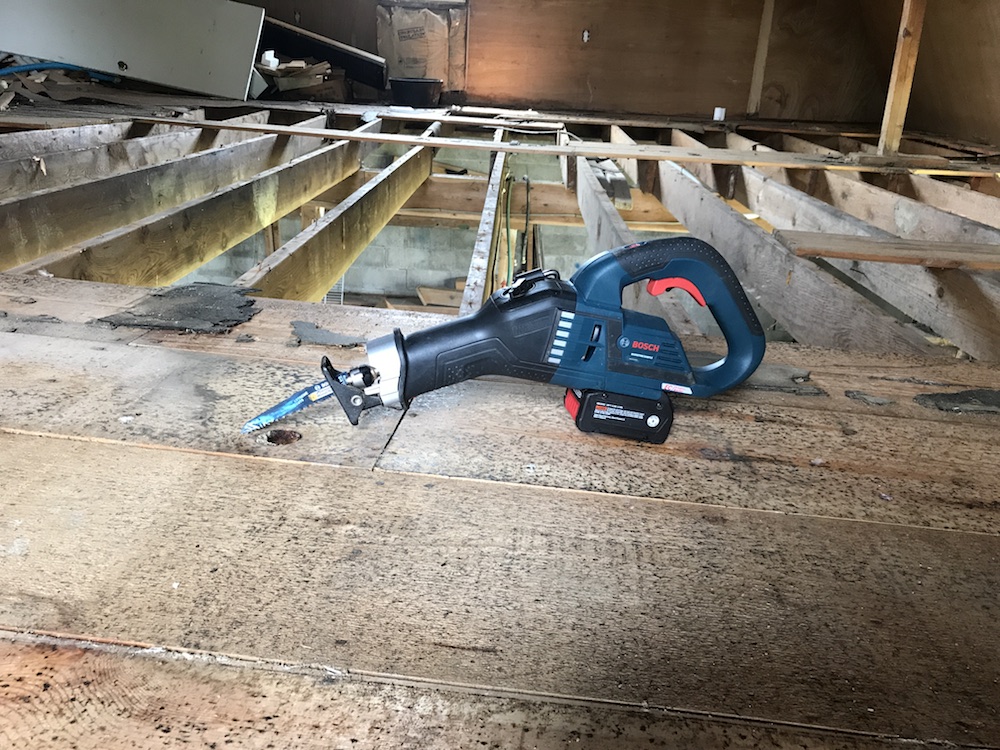 Buy the bare tool from our sponsor Ohio Power Tool for around $299: