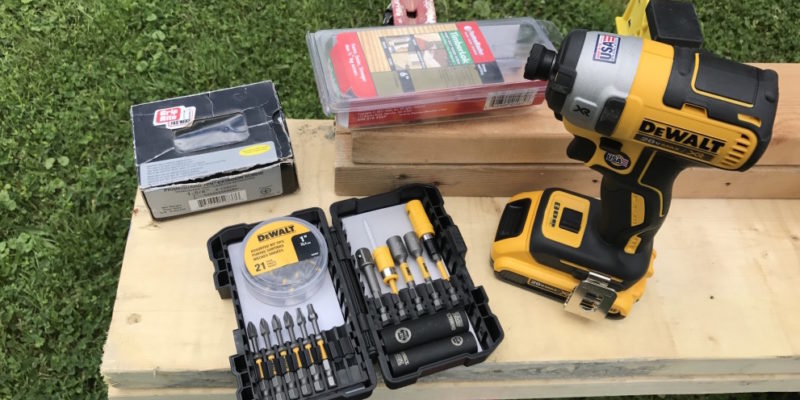 There are some things you just can’t have too many of. Brain cells, for example, or friends with fully-stocked fridges and a Kegerator. Another thing that’s helpful to have a lot of is driver bits. It’s a tad frustrating to need a Phillips bit to finish up a project, and discover your only one has a rounded-off tip. The new DeWalt MAX Impact 35 Piece bit set makes it likely you’ll have the right type of bit for the job – and that it won’t be too damaged to get the job done.

Nestled in a sturdy black storage case, the 35 pieces that come in the DeWalt MAX Impact set cover the most commonly-used fastener types very nicely. In addition to the requisite slotted and Phillips head bits, there’s a good assortment of “T” and square-drive bits, a magnetic screw lock holder, a magnetic screw lock sleeve, a 3/8” socket adapter with two sockets, and two commonly-used nut drivers. Here’s the full list of contents, followed by the specs from DeWalt: 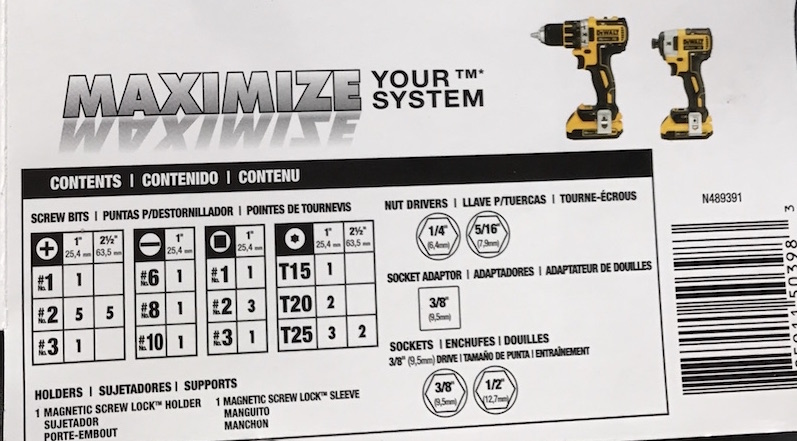 If The Bit Fits…

If you use an impact driver, you know the incredible amount of torque they generate. While this is great for getting your fasteners sunk, it puts tremendous pressure on the driver bits; I’ve stripped out many a screw, and destroyed some brand-new driver bits, just because they weren’t up to the task. The DeWalt MAX Impact bits are optimized to fit perfectly in your fasteners of choice, greatly reducing wear and tear on both the bits and the fasteners.

When you insert a 1” bit into the included magnetic screw lock holder, it locks firmly in place. Pulling on it won’t get it out, but if you slide the little black sleeve with the arrows downward, the bit will pop right out. It makes a great extension, and the little ring at the top is magnetic, so your fasteners will stay snug on the tip of your bits. An extra magnetic sleeve comes with the kit, and works with any of the longer driver bits.

The nut driver bits also have strong magnets near the end. They did a great job keeping the various lag screws and Tapcon screws from taking a dive. The longer bits and the nut drivers have a wide yellow band around the center, and even the 1” bits have a small yellow band. While the jaded may say this is just DeWalt showing off its favorite color, it also makes them a lot easier to find when you drop them on the floor or in the dirt.

Taking The DeWalt MAX Impact Bits For A Spin

Recently, I did some testing on a couple of hammer drills and impact drivers. The testing included sinking and removing various fasteners, ranging from 1-5/8” construction screws to 6” lag screws. I used components from the DeWalt MAX Impact bit set for all of them.

I started out with a batch of GRK 4” #10 construction screws. These screws use T25 “star drive” bits, which are my favorite – it’s almost impossible to get them to slip, and I’ve never had one strip out. I sank several with the 2-½” DeWalt MAX impact bits, and several more with the 1” bit in the magnetic screw lock holder. As expected, the fit was perfect, and the screws went in and came out with no problems.

After the four inchers, I took it down a notch, and sank a bunch of 1-5/8” Phillips head construction screws. Once again, I sank some with the 2-½” bits, and some with the 1” bits inserted into the magnetic screw lock holder. Both bits fit perfectly into the screw head, and I had no trouble sinking and removing any of the screws, and no issues with stripping or cam-out. The magnetic sleeve on the smaller bits did a really nice job of holding the screws in place to get them started.

I did the testing at our farm, and since everything was handy, I made a quick side trip. We’re getting ready to tear down our collapsing barn, and I wanted to salvage a large ventilation fan out of the ceiling. With a Phillips bit in the extension, I had the fan detached from the frame faster than you can say “tiiiimmmber!”

A Bit Of A Lag

After playing with the little screws, it was time to graduate to some lag screws. I first ran in some 6” Timberlok screws, using the 5/16” nut driver. It was a perfect fit for the Timberloks, and again there were no issues putting ‘em in and taking ‘em out.

I concluded the lag portion of the test with some 3/8” x 6” lag screws. With no pre-drilling, these babies take a fair amount of torque to sink. I chucked up the 3/8” socket adapter with the ½” DeWalt MAX Impact socket, and got to it. The socket fit the head perfectly, and the lags went in and came out perfectly.

The final test of the DeWalt MAX impact bit set was to run in some Tapcon screws. I drilled several 3/16” holes into a concrete block wall, and grabbed the 5/16” nut driver. This driver is the perfect size for the head on ¼” x 2-¼” Tapcon screws. Once again, the driver sank and removed all of the Tapcon screws without incident.

My Final Two Bits Worth On The DeWalt MAX Impact Set

Over the years, I’ve gone through a LOT of driver bits. Some I’ve lost, some have just worn out after lots of use, and I’m convinced several are hiding out in South America. There have also been some I’ve destroyed, either because they were cheapo crap to begin with, or because I may have overtaxed them a mite. In any case, I long ago came to the conclusion that it pays to buy good quality, no matter what the product is, and in my opinion the DeWalt MAX Impact bits are very good quality.

The set contains a good assortment of the most commonly-used sizes, including the nut drivers and sockets. The bit-to-fastener fit is great, and no fasteners or bits were harmed during the course of this testing. I especially liked the 2-½” bits, and the nut drivers with their magnetic inserts.

The only fault I found with the entire set is that the round container that holds the 1” bits prevents the case from closing completely. If it were about 3/16” thinner, it would be perfect. Ever resourceful, our Home Fixated suggested workaround is to use a Tic Tac box. It holds all the 1” bits with a “bit” of room to spare, and fits perfectly in the case. I chose refreshing Freshmint, but I suspect any flavor would do. Just don’t get confused after a long day working and try to eat the bits, OK?

If you have a lot of screws to drive and lags to sink, and you’re tired of stripped fasteners and rounded bits, check out the DeWalt MAX Impact driver bit set. It has all the sizes you’re likely to need, and I think you’ll be very happy with the quality. And don’t forget to grab a box of Tic Tacs at the checkout. 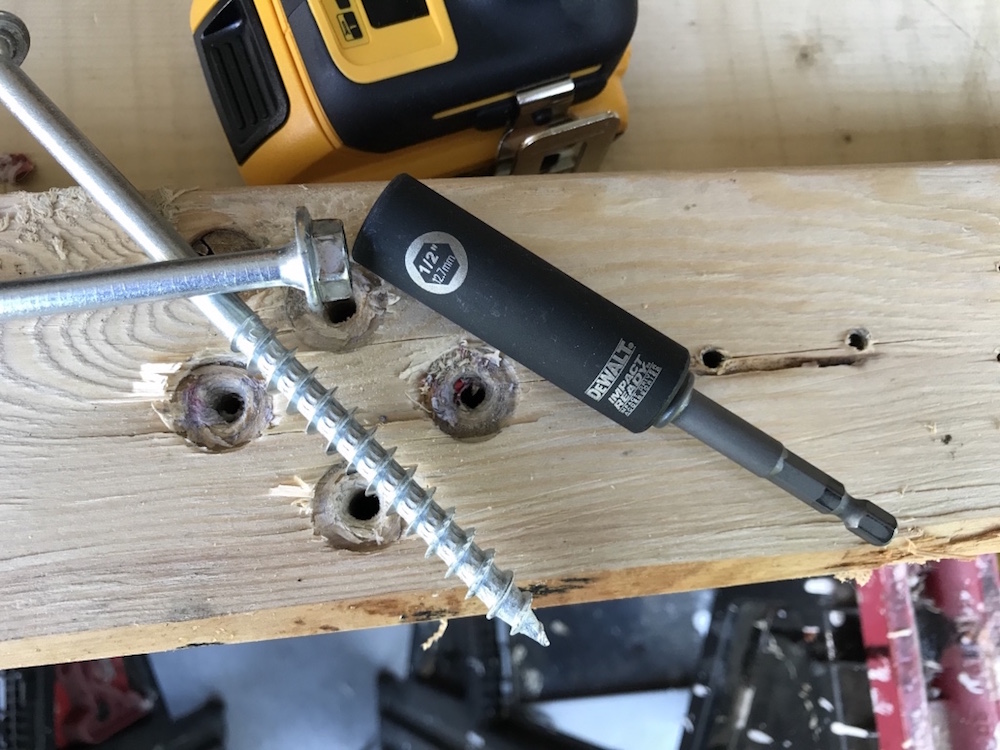 Pick one up for around $30 from sponsor Home Depot: