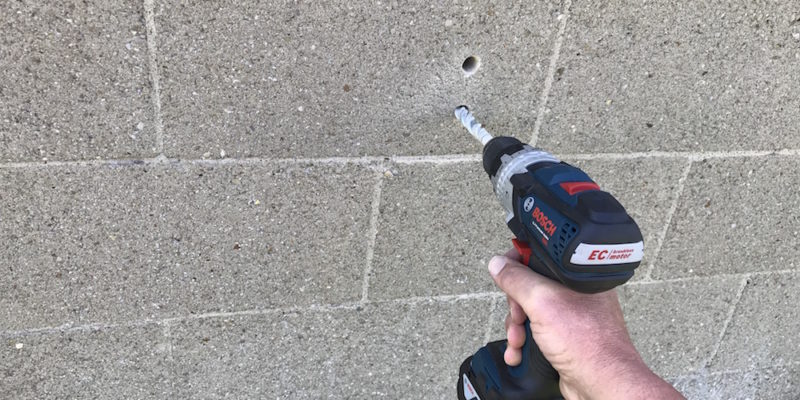 Sometimes, things are just hard. Concrete, for example. Fortunately, great minds are at work helping us find ways to overcome these hard things. As they pertain to making holes in concrete, anyway. The latest example of this is the new Bosch HDH183 18V EC Brushless Brute Tough ½” Hammer Drill/Driver. Since that’s a tad cumbersome to say (and type) more than once, I’m shortening it to the Bosch HDH183 Hammer Drill, so I can finish this before bedtime. Bosch sent one to HomeFixated HQ to evaluate; we’ll see if it makes a hard job any easier.

Drilling Down Into The Features

Making holes in concrete and steel requires a lot of torque, 663 in/lbs. in the case of the Bosch. All that torque can result in a fast and furious kickback if the bit suddenly binds up. Both the Bosch HDH183 hammer drill and its equally torquey but hammerless brother, the Bosch DDH183, feature KickBack Control. This feature helps reduce the risk of user injury by using an integrated acceleration sensor that stops the drill’s rotation during bind-up situations. The tool’s LED light, in addition to lighting up those dark, scary spaces you’re drilling in, also serves as an indicator that KickBack Control, or the tool’s overload protection, has been activated.

Anyone on the Bosch 18V Lithium-Ion battery platform will be happy to know that the Bosch HDH183 hammer drill will operate using any Bosch FatPack or SlimPack 18V battery. These batteries feature CoolPack technology, which includes a heat conductive housing to keep batteries cooler for better runtime and longer life. The batteries also feature an onboard fuel gauge, something I wish every battery had. Rounding out the tech portion of the festivities, Bosch’s Electronic Motor Protection and Electronic Cell Protection prevent the tool and batteries from overload and overheating.

The drill has a two-speed selector: Position 1 is for high-torque driving, at 0-480 RPM, position 2 cranks up the drilling speed to 2,100 RPM. The drill also produces no-load BPM (beats per minute) of 0-31,500, for your concrete-puncturing enjoyment. A 25-position clutch lets you precisely dial in your torque, providing great control and reducing snapped or stripped fasteners. The drill also features an upgraded single sleeve metal chuck, which provides great bit grip and torque transfer.

One other feature that’s a must on any high torque drill is a side handle. The Bosch HDH183 hammer drill has one that slides on and secures quickly and solidly, and that includes a depth stop rod to keep you from drilling through whatever lies beneath (or to the ideal depth for your specific fasteners). And when you release the trigger, an electronic brake stops the drill immediately, further reducing the opportunity for things to go horribly wrong.

The Bosch HDH183 hammer drill got its first workout when I loaned it to a neighbor. He and his wife and two kids moved in about a year ago, and while they focused on getting settled in and updating the house, the garage became a bit of a dumping ground for tools, supplies and materials, and household items that hadn’t yet found their rightful spot in the house. Forget about not being able to park in there; they hadn’t even seen the floor in several months. At some point, his wife took a peek in there, and “suggested” he get the garage organized. Shortly after, with visions of sporty new shelving and marital harmony in his future, he came in search of a hammer drill.

My neighbor, who I’ll call “Bob,” since his name is Bob, has a two-car garage built of concrete block, faced with brick. His timing was good, as the Bosch HDH183 hammer drill had arrived a few weeks before, and I hadn’t had a chance to give it a workout yet. I gathered it up, along with a battery and charger, and handed it over. Having had less than stellar success with some previous cordless hammer drills, though, I also gave him my Ridgid corded hammer drill, just in case.

A couple of weeks or so went by, with no contact, since I also have a wife with a list of “suggestions” too. Then one evening, Bob stopped over to return the drills and partake of a cold beer on the porch. We chatted about how his garage project went, and – spoiler alert – Bob said the corded drill spent most of its time watching the Bosch HDH183 Hammer Drill do all the work. Here are some observations from his brush with the brushless Bosch Hammer Drill:

“A full year after moving into our new house our two car garage continued to be a catchall – disorganized, piled, sprawling across the floor. After a weekend with the Bosch cordless hammer drill, I have three walls of storage and shelving with floor space for workbench, motorcycle, car and the kids’ bicycles.

“The Bosch cordless hammer drill had the same power as the corded hammer drill that I also used. It drilled into both brick and cinder block with the masonry bit and drove the fasteners in beautifully as well. The chuck was easier and faster than the corded one that required a chuck key. It took a firm grasp to loosen, but held the bit well and was much faster to swap out bits and drivers. The power and torque was more than enough for these bricks and cinder blocks.

“The battery life lasted longer than the project of creating and hanging shelving to organize the entire garage. My wife was shocked and impressed, adding ‘I didn’t know our garage had a floor.’ A really nice tool”. Woohoo – marital harmony in the ‘hood!

After getting the Bosch HDH183 hammer drill back, I gave it a closer look. The first thing I noticed was its size and weight – it’s a good bit lighter than my corded hammer drill, and a lot more compact. The drill is comfortable to hold, with a thin rubber overmold on parts of the handle, and is nicely balanced.

Using the drill is very intuitive; all the controls are clearly marked. The clutch moves easily from one position to another, and the little drill / screwdriving / hammer pictures on top provide a good clue as to where to set the selector. The chuck looks and feels beefy, and is easy to operate, and as Bob pointed out, not having to use a chuck key is a beautiful thing.

To give the Bosch HDH183 hammer drill a little workout, I first chucked up a 5/8” masonry bit. I drilled some holes through concrete block, and the bit punched right through. I used the high speed setting, and there was no bogging down or stalling.

Next I inserted a 3/16” bit, and drilled some more holes. I then grabbed some ¼” Tapcon screws, and used the Bosch to drive them in. Again, the Bosch HDH183 hammer drill had no problem at all, either in drilling the holes or driving the Tapcons.

As a little HomeFixated tip, when getting your supplies ready to use the Bosch HDH183 hammer drill – or ANY hammer drill – include some hearing protection. As will become quickly evident when you fire it up, these suckers are LOUD, and we want you to be able to hear the lavish praise you’ll receive when your project is complete!

If you’ve got some “suggested” projects in your future that require making holes in concrete, take a look at the Bosch HDH183 hammer drill. In the testing we did, it had plenty of power for drilling and fastening, and its compact size and light weight make it a lot more convenient to schlep around while you’re getting the job done. While my Ridgid hammer drill also does a great job blasting holes in concrete, the Bosch is faster and easier to get into action, and has one big difference I can do without – the cord.

As with all Bosch cordless tools, the Bosch HDH183 hammer drill comes with Bosch ProVantage, a protection plan that extends coverage against defects to three years (expanded coverage in the first 12 months of the standard warranty), plus two-year battery coverage. The tool also carries a 30-day money-back guarantee. 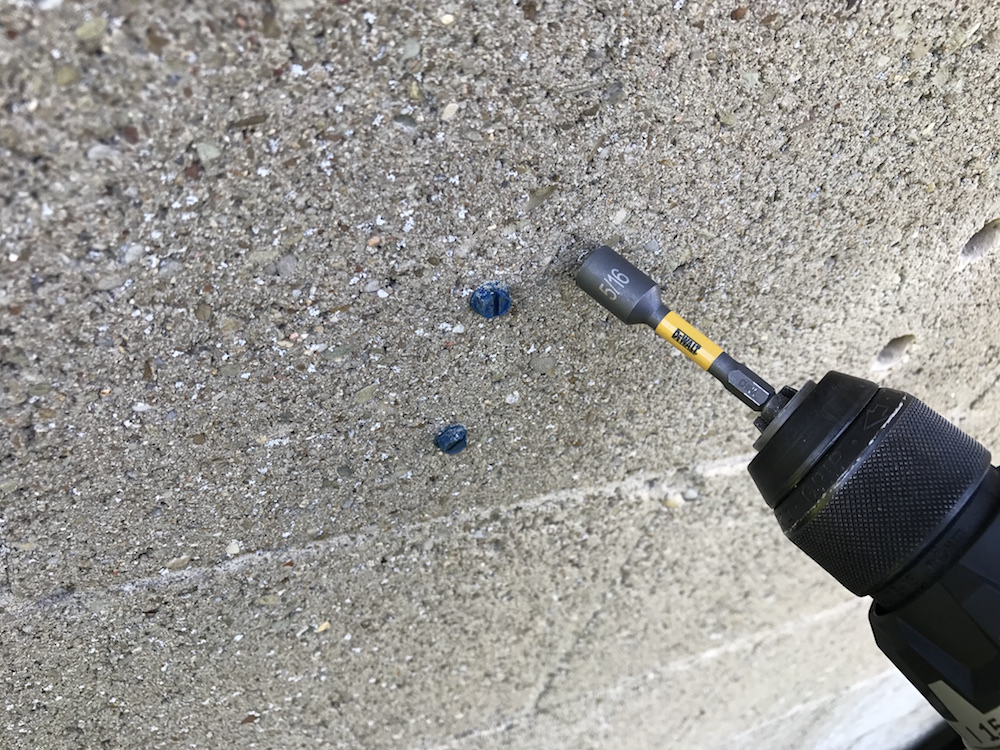 Buy the kit from Home Fixated sponsor Ohio Power Tool for about $300:

Buy bare tool for around $200 from Ohio Power Tool: