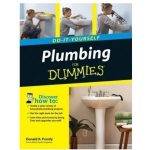 My parents didn’t let me watch scary movies when I was a kid. This naturally meant that I spent a lot of time at friends’ houses, disobeying their wishes as much as possible.

As it turns out, my parents were – gasp – *right* not to let their youngin’ watch these ‘mature’ movies, as I was quite the gullible, dorky child who was too easily spooked by the cheesy climactic music, fake blood and (now) laughable horror effects. I’d have nightmares about demonic clowns infiltrating shower drains, mind-controlling rats coming out of sewers and Ghoulies waiting in toilets.

In short, I developed a fear of plumbing.

This meant that I never learned how to properly fix anything plumbing related – and it is that and not a Ghoulie – that has come to bite me in the butt.

When the drain under our bathroom sink started to leak recently, I realized that it was likely one of those jobs a homeowner could tackle herself and I needed to get over my phobia of all things plumbing. While there are certainly online references available, I decided to check out Plumbing Do-It-Yourself For Dummies – and I’m very glad I did.

This book, written by Donald R. Prestly, lays information out “dummies style” where no question is too stupid to be addressed somewhere in the book. With loads of step-by-step pictures and tips, DIY Plumbing For Dummies clearly and concisely shows the most novice of plumbers how to identify issues, select the right tools and tackle a problem or project. The main sections include understanding plumbing in general (and tools used), faucets and sinks, tubs and showers, toilets, and a section of tips and safety notes.

Was it worthwhile? Definitely, says the girl with a sink that no longer leaks. (I’m also proud to report that I had only one minor panic attack about the thought of Pennywise poking his clown finger through the drain.) Considering what it costs to bring a plumber in, knowing how to handle various easy issues and projects around the house is well worth the investment of time, tools and Plumbing Do-It-Yourself For Dummies