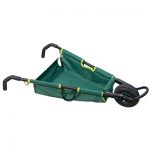 Since I’m past my college days, I gave up things like this idiotic website a week years ago.  I think there should be some sort of revival however, and we can have tools, beer, TVs, and gadgets on there.  So, here I go with another one of my crazy ideas:  Fixate or Terminate.  It’s like our own game show.  And, since pretty much everyone on the internet is a solid, upstanding citizen–I feel I could trust the results of a website like that.  When has the internet ever steered me wrong?  Oh yeah, this! Why did this become a fad?  Why did this happen?  Is there any single reason for it happening?  I hate you internet. Enter the Taylor folding wheelbarrow.  I can’t decide if this is cool, or not.  Here is my list so far.

This wheelbarrow could also be set on the ground so you could rake, (rick)roll, shovel, beg, and plead with things you couldn’t lift into a regular wheelbarrow–but then that brings me to my other thought.  This ‘barrow doesn’t exactly look like it could handle a truly big arsed load.  I’m all for saving things like…oh…the discs in my back, so the idea of working “smarter, not harder” appeals immensely to me.  Which gets me wondering if this thing would truly be a good thing to have.

Fortunately for me–there isn’t a ton of landscaping to be done around here, so a wheelbarrow isn’t of prime importance to what needs doing around here.  For those that do like to landscape, garden, or other stuff where you care for plants and don’t kill them–I can see this thing being a real work saver.  Light, easy to maneuver, and easily cleaned out by hosing it out without the rust.  Plus–instead of one of those UrbanParentStrollerHummers you could just use this thing.

Again–admittedly I’m not really a gardening/landscaping kind of ‘Fixater.  I get all misty just thinking of the housewarming gift plants that are now nothing but empty pots.  It was pretty much the Plantpocalypse around here until we told people we’re not really into taking care of living things.  The dog is still alive because she is more of a top predator than pet.

So, folding wheelbarrow:  Fixate or Terminate? If you say Fixate, the Taylor Folding Wheelbarrow is available for a bargain or horrifying (depending on your verdict) $54. Share your “Fixate” or “Terminate” votes in the comments below.