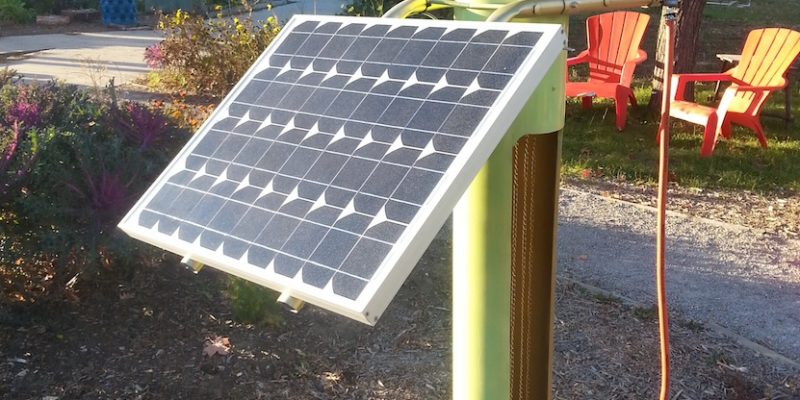 This fall, I had the pleasure of being a guest instructor at a small college here in Iowa. It’s not your average private liberal arts college, however. The Maharishi University of Management, or MUM for short, is a unique educational environment where students learn transcendental meditation along with computer science, biology, art and other more traditional classes. Their “Sustainable Living Center” is one of the premier “green” educational buildings in the country and I was honored to be asked to come and coach students in developing renewable energy projects including solar and wind power, biodiesel and fuel cells.

One particularly fun class project that I developed (along with student Leonia May and Professor Lonnie Gamble) was a solar-powered bicycle repair station. It is basically a low-dollar DIY version of the awesome Dero “Fixit” bike stations that are popping up in a lot of public spaces. Our station features our own design twists, with the addition of a solar powered compressor, work light and USB charger.

The Deros are made to take some serious abuse, with a main casing that is made out of galvanized steel pipe and tools secured inside on tethers made from stranded airplane cable. For out modest experiment, we used a scrap chunk of 8” Schedule 40 PVC for the main housing. It obviously won’t take the abuse that the DERO will, but there isn’t much of a vandalism problem at a school of laid back meditators (I hope…) The tools are suspended from brash sash chain inside. I cut the opening in the side of the pipe with a jig saw, and used some 3/4” ply to cut a disk that would serve as a shelf in the top of the tube to hold our components.

Leonia came up with a bashed up old “Slime” 250 PSI 12 volt compressor that was laying around the school shop, along with a 12 volt battery of the type used for backup power in emergency exit signs. They both slipped inside the top of the 8” pipe with room to spare. We drilled a hole for a nice little toggle switch with a rubber boot to turn the compressor on and off, and hopefully it will survive the weather okay. The air hose was salvaged from the shop, the 50 watt solar panel was laying around the shop, and the mounting bars were bent from scrap chain-link fence top rail left over from building a greenhouse (that will be a later article). The tools are the el-cheapo Wally World variety. Even the spray paint came out of my bin of partial cans. The only thing we splurged on where the flange and cap, which weren’t cheap, but since we were so frugal with the other components, we went big to get that nice “Steampunk” look. I also added a little Morningstar “Sun Saver” charge controller our of my own surplus solar gizmos collection. This controller will prevent the battery from overcharging and exploding on sunny days (I hate it when that happens) or from getting run too far down. These are great little devices that run about 40 bucks, and if you are charging batteries, you gotta have one.


After assembling the unit, we dug a footing and poured concrete, as I am sure that the solar panel will catch some serious wind, and we want it to stay where we put it! 5 bags of Sakrete later, we had it in place.

So far, it’s a real conversation piece, with lot’s of passers by stopping and trying to figure out what it is. Pretty soon, the light goes on over their head, and they start playing with it. Now students and faculty are coming from all over campus to use it. The school has campus yellow bikes that are shared, and it is the perfect place to do maintenance on them. With winter coming on, it may be less popular, but it will be there, for those hardcore riders who don’t let a little snow stop them!