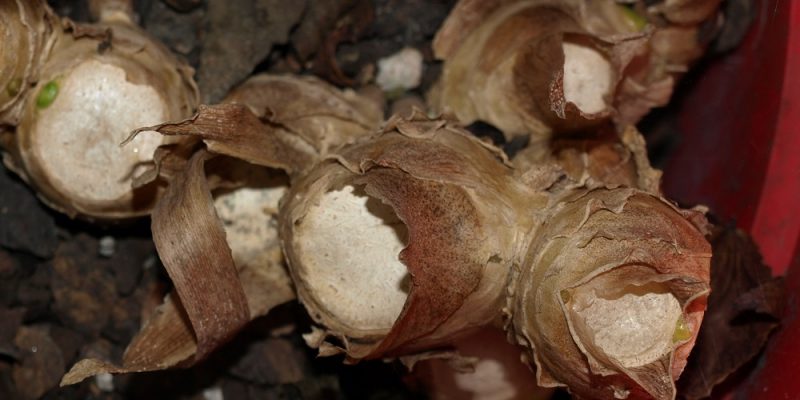 Even those of us who know that some of our perennials go dormant in the winter can fall prey to worrying about certain specimens after cooler temperatures arrive and the plants begin to show it. We find ourselves poking at them and pondering the eternal questions that have bugged gardeners for centuries. It looks dead, but is it really? Have I killed it? What if it’s all an elaborate fake-out and I waste tons of money buying new plants only to have them remerge with a vengeance when springtime comes? After all, making accurate predictions is very tricky science.

Identifying the Fakers of the Plant World

They are out there, just waiting for their chance to panic the most blasé of gardeners. Pay $15 or more for a plant that appears to randomly die for no reason and you’ll see what I mean. After all, there are always those marginal plants that come roaring back to life some years and croak during particularly harsh winters. In my 8b garden mandevilla species and lemongrass (Cymbopogon citratus) will die down to their roots if the temperatures suddenly plummet but they will completely croak if the weather gets too cold for their liking. It’s a matter of guesswork and luck if they make it. But when the plant tops turn brown and crunchy, it’s probably a good idea to bring them indoors if they haven’t cemented themselves to the porch railing. In that case, the specimen in question is probably a goner.

Lemon verbena (Aloysia citrodora), stevia (Stevia rebaudiana), and bougainvillea plants are notorious for playing dead for the majority of the winter. They turn into skeletons of their former selves but will return if they’re sporadically watered and kept warm enough. Some lavenders and thymes will also leave a tangled mass of dead limbs to mark the spot they inhabited once they’ve clocked out for the season. Ginger (Zingiber officinale) and turmeric (Curcuma longa) likewise die down to their roots and drop all their leaves before going dormant. The plus of growing those two plants is that they don’t have to be watered in the winter. Instead they can be stored in a warm spot until they start showing signs of life in the spring.

More Tips of the Trade

Plants that retreat seasonally into their bulbs and rhizomes are pretty easy to assess in terms of survival. If you have plump bulbs and fat rhizomes, it’s likely they will return in the summer unless they’re tropical plants that got too cold. However, you’ll want to discard any that are particularly shriveled. Very small ones also aren’t worth planting because they may not even sprout or flower successfully. Specimens that die down to roots but can’t be dug up and investigated without tragic results are somewhat harder. A lot of these turn crunchy stemmed and brittle in the autumn. If all else fails you can scrape a fingernail across the base of the plant in the spring. Usually if the bark peels away to reveal green, it’s alive. If it’s brown, you probably are safe to toss the plant.

Of course, research is a wonderful thing and I highly recommend it (beyond just this article). You can never know too much about something you are attempting to grow. Thanks to the internet it has never been easier to access information or get sidetracked by random things. (I personally have lost more days than I care to count looking at LOL cats). Gardeners might also want to check out the garden book assortments that are available at their local public libraries. Yes, these places do still exist!  When looking things up, be sure to include the cultivar of the plant in question if you know what it is. That is a crucial piece of information when one is considering if the herb that got mistakenly left outdoors is ‘really most sincerely dead’ or if there’s still hope. There is always a chance that the plant in question will be dormant instead of 6 feet under.

The onset of spring is the best way to separate the fakers from the corpses. Sorrel (Rumex acetosa) in particular is especially quick to pop back up so if it doesn’t return by about June, you can probably give it up for dead. However, plants that require really warm weather such as ginger and turmeric may not make an appearance until midsummer. The fact remains that, if you haven’t watered your plant all winter and it isn’t a type that goes fully dormant, there’s a very good chance that it is toast. We wish you far more dormant than doomed specimens!