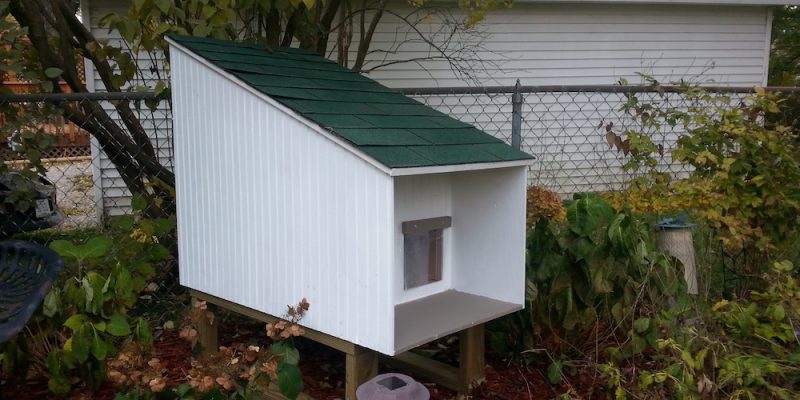 I love cats. There, I said it. Cats are great animals! I don’t remember a time in my life when I didn’t have at least one cat sharing my home or workshop. However, even a cat-lover like me realizes that too many cats can be a bad thing. When people don’t take proper care of their cats, the cats breed, some of the kittens go stray and some of those stray cats become feral. And then, someone has to deal with the problem.

I do a good deal of work in and around the city of Cedar Rapids, Iowa. During the spring of 2008, Cedar Rapids experienced a 500 year flood that devastated much of the city. Along with the tragedy of destroyed homes and displaced people came another problem. Feral (wild) cats. People were forced to leave their cats behind, and when the floodwater receded, feral cats began to make their homes in the abandoned areas of town.

As people began to move back in and rebuild, I was asked by some animal rescuers to develop some attractive, affordable, insulated shelters that they could use in managing a feral cat colonies while they trapped and neutered the cats.

My job was to make the most sturdy, warm and affordable shelter possible, that would look presentable to neighbors, etc. I used Sketchup to develop several iterations before settling on one that would provide adequate space for several cats, and could be made from standard 4X8 sheet goods with a minimum of waste. The pictures show what I came up with. The units have 1” rigid foam in all walls, roof and floor, an adjustable “loft” and wind baffle that can be removed for cleaning and a 6 mil clear plastic flap doors. The roof is covered with leftover shingles from ReStore, and hopefully future iterations will include more recycled or surplus materials.

In building the first three units, I have, of course, come up with a lot of ideas for improving the next batch I build. I would like to produce flat-pack components that can be easily assembled by the rescue folks or volunteers with a minimum of skills and basic tools.

“Okay,” you might be asking, “Why manage a feral colony? Why not trap them and take them to a shelter, or euthanize the unwanted cats?” Actually, some of my non-cat-loving acquaintances have made some even less kind suggestions that I won’t dignify by repeating. Interestingly, research shows that feral cats are very territorial, and if you remove cats from one area, other cats tend to move in. By maintaining the feral colony in their own area, it actually controls the number of cats. Of course, managing the colony means neutering the cats so they don’t multiply, and seeing after their basic health and well-being. Sometimes, feral cats will even decide they like humans after a while, and when they do, they make wonderful and fiercely devoted pets. Some of our best cats started their lives as ferals.

If you are interested in finding out more about how to deal humanely with feral cats in your area, visit the Alley Cat Allies website. They have tons of great information and resources there.