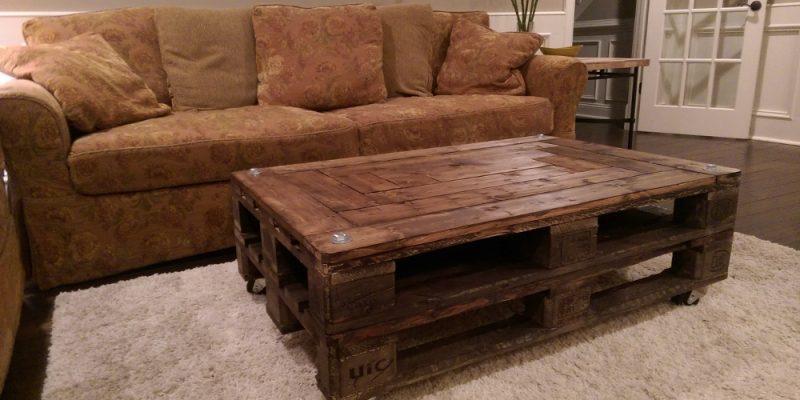 In case you haven’t noticed, there’s a pallet reuse movement afoot. Never one to be left out of the latest fad I decided to grab a few pallets and build myself a “rustic industrial” coffee table, oops! I mean cocktail table, because cocktails are way more fun than coffee. And I thought it would make a nice accent piece inside the shipping container house I plan to build in the future.

So the first thing I had to do was find some pallets. I happen to work in a warehouse office park that is rife with discarded pallets so I grabbed my husband and his pickup truck and went driving through the warehouse alleyways. We hit the mother lode in the 2nd ally (luckily we didn’t have go dumpster diving) and I started throwing every pallet I saw into the back of the truck. When we got back to our office we unloaded these four from the back of the truck. I was thinking we’d use the 2 matching ones for the table and we’d disassemble the other 2 and use their parts for the table top.

OK – so here was my original idea; put wheels on the bottom, stack 2 pallets on top of each other but separate them with 3” or 4” galvanized steel pipes and flanges, and dress up the top with reclaimed pallet wood in a chevron or herringbone pattern. As you can see by the finished photo at the top, that is NOT how it played out.

After I found the pallets I went to my local home improvement center (we’ll just call it the HIC from here on out) to get the wheels, 3 inch galvanized pipes and the flanges. I chose wheels that have a weight rating of 100 lbs – no problem there. Next I hit the plumbing isle for the pipes and flanges; I found the pipes, they were less than $2.00 each so I threw 9 into the cart, I figured that’s how many I would need to support the weight of the top pallet and to make it look balanced. I found the flanges conveniently located near the pipes, but wait a second, am I seeing that right? Are they really $12 each?! Time to break out the calculator, I have 9 pipes, that means I need 18 flanges, 18 X $12 is $216. Uh, no! I guess I won’t be doing that industrial look – time to rethink this project. For now I’ll just get the wheels.

Meanwhile back at the office we decided to go ahead and attach the wheels while I thought about another design style for this table. It was pretty easy, we just turned the pallet over, lined the wheels up on each corner (don’t get them too close to the edges or you’ll risk splitting the wood when you attach them), pre-drilled the holes then attached them with bolts and washers. A bit of advice would not go amiss here; look the pallets over before you start building with them. I had to replace this one because one of the bottom supports was fractured, these things take a beating carrying tons of weight and being moved around by forklifts all day. And if you’re going to make this particular project you should probably stain or paint the individual pieces before attaching them together, another thing I didn’t do, in fact, my modus operandi seems to be: if there is a hard way to do something I’ll find it and why do it right the first time when I can redo it!

Done! OK, not quite, but I did see some pictures on the web where someone attached wheels to this exact pallet, stained it and called it a coffee table, I call it a heavy duty furniture mover, it’s way too low to be a coffee table.

While I was attaching the wheels to the bottom pallet my co-worker was dismantling the other pallets, or rather she was mutilating them. As it turns out it’s really, really hard to take these things apart without breaking them into a million pieces, I guess that’s why there’s YouTube videos on how to disassemble them.

Once you’ve got the wheels on and you’ve destroyed a few other pallets the next step is to stack the 2nd matching pallet on top of the first, I decided the best method for attaching them together would be glue and brad nails, it looked like it was going to be really hard getting a screw driver or drill into the narrow area where they need to be attached. While I was thinking about how to attach them I hit on the idea of the bolts, I actually thought I could secure them together with really long lag bolts, but then I would have to buy a really long drill bit and I’m trying to do this project as cheaply as possible so that was out of the question. BUT, I could put in shorter bolts and washers as a decorative “industrial” feature, and it’s a good thing too because I was starting to think I might need to make the table “shabby chic” and “shabby chic” is so passe now. Rustic Industrial – good, Shabby Chic – bad. 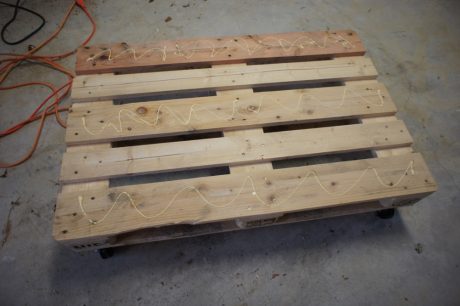 I made a second trip to the HIC to get the bolts, brad nails, stain and 1×5 straight stock for the top (since I couldn’t save any of the pieces from the extra pallets, I used four 8’ boards). As soon as I got home I made a third trip to the HIC because I bought the wrong size brad nails!

I decided to do an overlay on the top so it would look more finished, but more importantly so my cocktails don’t fall between the cracks and spill all over the place. I ditched the herringbone and chevron pattern because just thinking about laying them out made my head feel like it was going to explode. The pattern I decided on (I don’t know what it’s called) was a lot easier and quicker to layout and install, and I think it looks great! I glued and brad nailed the cut boards to the top of the pallet. If you stained or painted the pallets beforehand then at this point all you need to do is stain or paint the top, but as you’ve already discovered, that’s not the way I roll – I have to stain the whole thing – I will not make that mistake again! Who am I kidding, of course I’ll make that mistake again…

Half way through the staining process I made my 4th and final trip to the HIC because I ran out of stain, thank goodness it’s only 5 minutes from my house. I spend so much time there they once asked me to clock in.

I did at least one thing in the correct order, I waited until after I stained the top to install the bolts and washers. I used a ½ inch spade drill bit to drill the holes for the bolts, I centered them on the corners, then just screwed them in place, and voila! A rustic industrial cocktail table.

All in all is was a simple, straight forward project that only took a few hours and would have gone even quicker if I had followed my own advice. It turned out to be the perfect height and size too. If you have a few basic skills then you can do this project and you’ll save a few pallets from the landfill in the process.