If you are a procrastinator like me, it is about the time of year to take down and store the multitude of lights that took you absolutely forever to put up around the first of December. I know I’m not the only one. Half the block still has their holiday lights out even if they’ve since stopped turning them on. Probably this is because the weather has been cold and unfriendly for days now. I personally am severely allergic to cold weather, which explains why I live where I do, but that might just be me.

The Good, the Bad, and the Ugly 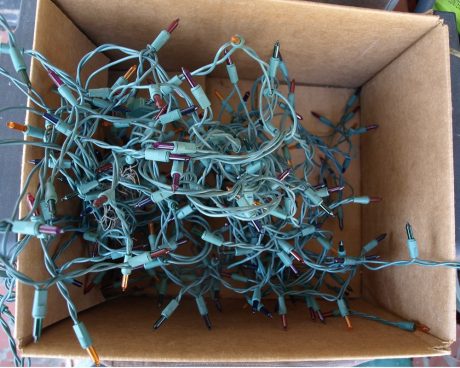 You’ll have to forgive my unpleasantness in bringing the matter up. Everyone remembers getting the lights out sometime last year (well, in December) and attempting to untangle a mess of epic proportions. Every year I keep telling myself I’ll do something other than toss the suckers in a box and most years I forget, leaving me with a puzzling mass of cords that would befuddle Einstein himself, to say nothing of someone who made far less than a perfect score on the SAT. To make matters worse, I have pain-in-the-butt icicle lights  that make unraveling the riddle even more fun. This leads to choice profanity that makes the neighbors stare at in abject horror and cover the ears of small children that happen to be passing by.

Once you’ve got all the strands divided up, the fun isn’t over. Then you’re stuck with the strands that won’t light up for no obvious reason. Then you end up having to search the house after trying to remember where you put the teeny, tiny packet of spare lightbulbs. I personally think my dog, the one that is part weed-whacker, might have eaten them. He eats everything else: garbage, plastic gardening pots, shoes that are still on people’s feet…

Let There Be Light

Why do we get involved with irritating mechanisms like holiday lights? Probably because we have a relative somewhere that appreciates the gesture or possibly because the Homeowner’s Associate has made lynching mandatory for those who don’t at least put up a few measly strands. But keeping the folks around you happy doesn’t have to be a painful experience. After all, what if the lights didn’t get tangled up? I know it’s an extremely odd concept but bear with me for a bit.

I did some research and, as it turns out, the simplest way to keep lights from getting tangled up is to wrap them around something. Large pieces of thick cardboard will work great for this purpose. Although cardboard is usually included with the lights themselves, it is always these horrid flimsy pieces that always tear up or ones that have a complex system of rivets which I can never manage to figure out on my own. Apparently you can buy spools to hold the lights, but I’m try to avoid spending money where possible and so I decided to make my own. 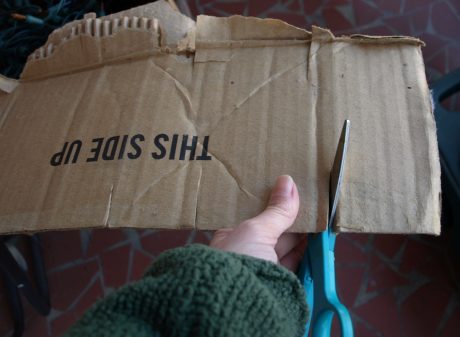 In the interest of being well-organized, I cut up a nice piece of cardboard with slots in the side to better keep the strands of Christmas lights from playing Twister. The easiest way to get cardboard is to cut apart a box (as shown here). Most companies tend to get things shipped to them so you can get them from work. I tend to save the boxes my plants come in. Or you can go out and actually buy cardboard but why pay for something you can easily get for free?

If you’re accident prone, take a pair of very sharp scissors and cut slits in the side. If you are not accident prone, you could do this using an Exacto-knife. For me that’s like asking to be sent to the emergency room, so I’m not going to attempt it. Anyhow, it turns out that this makes a light holder that works fine for my purposes. However, I think it would work better for single strands of lights not the kind that I have. 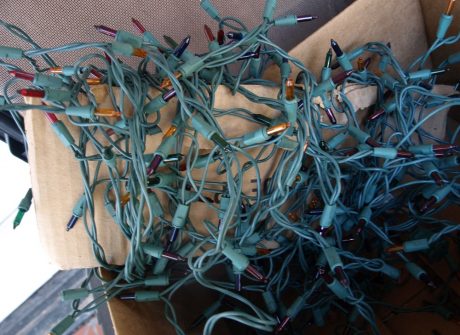 Or you could do the linked article suggests and put each light strand in individual plastic bags. In the interest of fair reporting, I tried this method too. They used sandwich bags and I used cheap, leftover grocery bags. As it turns out, the bags worked and they probably are the best bet for icicle lights. At least the strands won’t get tangled together, even if they might get tangled up in themselves. Another idea I had was to wrap the lights around a coat hanger and hang it up in the closet but, again, this would work better for single strands not icicle lights. (Pesky little rotters, that they are). The key with any good holiday light storage strategy is to resist the temptation to simply throw all the loose strands in a single box. 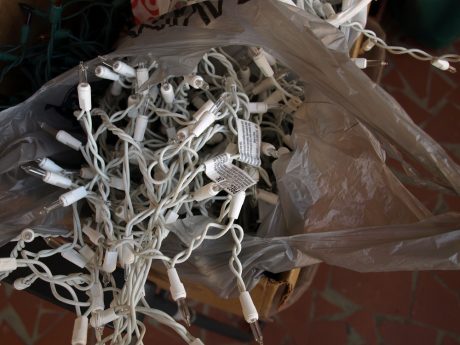 As for those easily lost packages of extra bulbs why not carefully staple those bags to the cardboard holding the lights? Or you could wrap it in some colorful packaging and likewise affix it to the cardboard piece. Then, box up the lot and shove it the closet until next year… Cue ominous theme music.