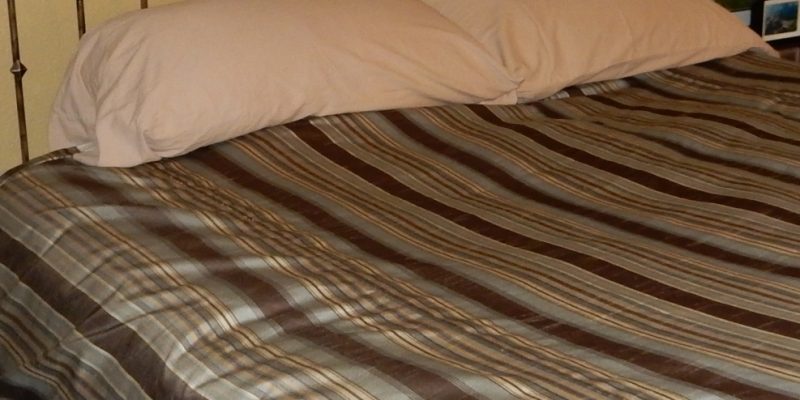 Our bed sees tons of action. Between the solid eight hours of sleep my hubby and I put in there every night, and the three littles jumping on it almost daily, it’s got a really tough job. Its bedding was starting to look rather weary and worn down. It needed a rest. And maybe even a replacement. So I decided that in return for all the support it’s provided us through the years, it was time to give it an upgrade. New bedding can really spiff up a weathered and well used bed.

A change in bedding is a simple overhaul, really. I began by searching around for a duvet cover to contain our puffy down comforter. After experiencing massive sticker shock though, I knew this was a project I could manage on my own. Plus, I’d get to choose any fabric I wanted rather than making an already-made cover work. With a 40% coupon in my hot little hand, I headed down to my local Hobby Lobby to buy my fabric, thread, some buttons, and Velcro.

I measured my down comforter to determine how much yardage I needed to buy. The length of the king sized duvet cover would need to be about 85 inches long. So, I bought a total of four 54 inch wide by 87 inch long panels in the equivalent yardage (about 11 yards) to encompass our comforter. I grabbed the other few items I needed to complete the project, and the total cost for the supplies was under $130 with my coupon.

The French do it Best

I didn’t want this updated bedding to look homemade. To make it appear store bought, I centered one of the panels in the middle of the bed. This prevented the appearance of a seam running down the middle of the bed. And, I used French seams for this project. A French seam is a fancy term for a seam in which the raw edges are sewn in so there are no raw edges to be found. This gives the seam a clean, professional look. A French seam was also important for this project because the fabric I chose frayed easily. Since French seams contain the frayed edges, I can rest assured that no matter how busy my bed gets, there are nice, flat, non fraying seams.

Pro-Tip: Keep Your Comforter In Place With Ribbon Ties Inside the Duvet

The final detail for this project was to finish off the opening. If I were an awesome seamstress who was excellent at buttonholes, I would have done button holes. But I’m not that skilled. So to fake it, I sewed squares of Velcro across the hole and covered them with decorative buttons to look stylish. The new bedding for an action-packed bed makes all the difference. The finished project makes our well used bed look like new. We can ramp right back up to our, ahem, typical bed usage.