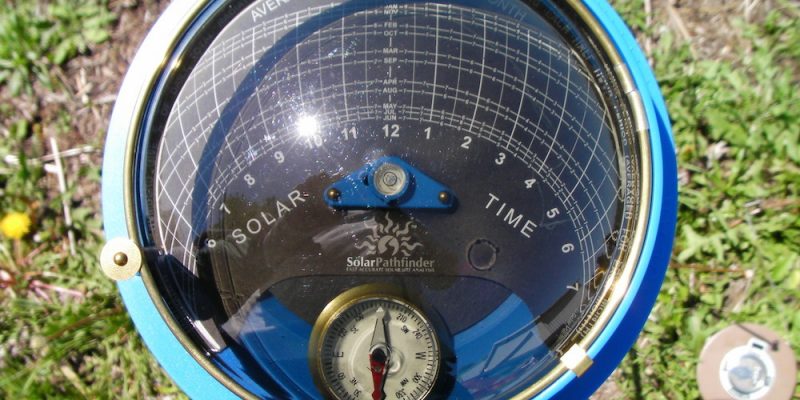 Long, long ago, in the dark days before mandatory digital technology, we toiled away installing solar equipment without the benefit of phone apps. Yes, it’s true! We went out and surveyed sites for solar installations with nothing more than a pencil and paper and some crude stone tools! Actually, the tool we used was anything but crude, and in reality, I still rely on my Solar Pathfinder to do really solid solar site surveys. Despite the fact that there are some dandy apps out there for analyzing solar potential at a given site, the good old Pathfinder is one of those rare cases of an analog tool adapting quite nicely to the modern, digital era, and it works equally well with the accompanying software, or using it the old fashioned, analog way. It is a truly elegant piece of equipment, and looks like it might be a prop from the original 60’s Star Trek series or possibly a steampunk device from the deck of Captain Nemo’s Nautilus.

The Solar Pathfinder was invented back in 1978 by a renegade scientist and inventor named Bernie Haines. Bernie was a long-time solar enthusiast, and during the energy crisis and solar boom of the late 70’s, Bernie struck on a brilliant design for a solar site analysis tool.

Richard Perez, the founder of Home Power Magazine stated, “Bernie’s manufacturing techniques are a symphony of basic physics applied to hardware store materials. Bernie saw a clear need and invented a product to fill that need. The fellow deserves some kind of award for forward thinking and design. Not only does his device work great, but it’s easy to use, accurate, ruggedly built, and just plain ingenious.”

Here’s a video that explains things pretty clearly (thanks for the link Jeff)!

Exactly how it works is a little hard to explain, but in the introduction to the manual it states: “The Solar Pathfinder is used for shade analysis (solar or canopy/habitat studies). Any trees, buildings, or other objects that could cast shadows are reflected in the plastic dome, clearly showing shading patterns at the site. The underlying diagrams are latitude specific and are engineered with data for the entire year. A wax pencil can be used to trace around the reflected shadows on the sunpath diagram, providing a permanent record of each reading. A compass and a bubble level are built into each Pathfinder, making it easy to keep the instrument level and facing in the right direction. The rubber tipped legs on the tripod telescope out, allowing a person to use the Pathfinder on sloping roofs and other rough sites.”

Essentially, you gaze into the semitransparent dome, and it magically shows you where the shade will fall by month and time of day. It’s wonderfully clever, like something Leonardo DaVinci would have invented. A beautiful thing about it too, is that unlike the plethora of solar site assessment apps that are out there, the Pathfinder is great for figuring shading for Photovoltaics (PV), solar thermal or even gardening. Not only is it great for pro solar installers, landscapers and gardeners, it would be a great teaching tool for a science teacher or scout master.

The current owner of the Pathfinder company is Anthony Courter, and Mr. Courter has done a great job of creating a fantastic software package to work with the pathfinder. Just snap a picture with a digital camera, phone or tablet, and you will have a very accurate analysis, nicely presented with tables and graphics, ready to present to the potential customer or fellow solar geeks.

I have used a Pathfinder for years, and it is truly a life-time tool that requires no batteries, although you may need to buy more of the “Sunpath” paper diagrams if you choose to go truly old school and trace the shading with a wax pencil rather than snap a digital pic. It is made in Linden Tennessee of US made components, so you know I love it. A great tool, invented, designed and manufactured by a small, American Company. AND, it’s a lot of fun to use. What could be better?