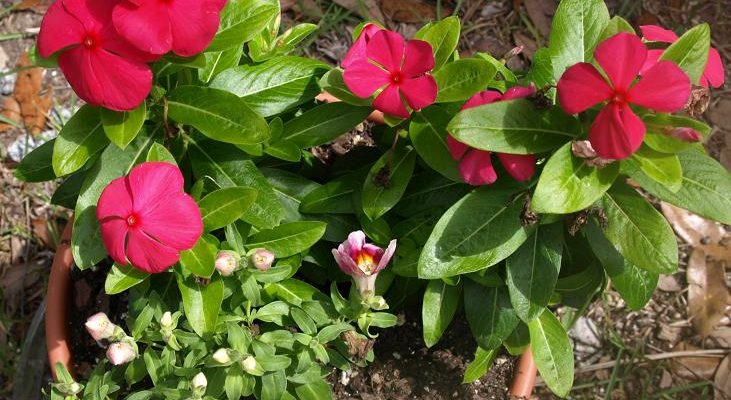 Of course, you want your garden to look super with as little maintenance as possible. We barely have time to throw some plants in the ground, much less spend whole afternoons tidying up. Am I right? Thanks to the squirrels, birds, and other random wildlife, the orderly garden of legend remains a modern myth. But with some basic maintenance and careful planning, your garden or container garden will continue to look spiffy in the upcoming year.

Here a weed, there a weed, everywhere a weed! Even if those aren’t the real song lyrics, I’m sure Old McDonald had some weeds on his farm too. Not the money-making kind: the worthless ones that get into everything. Even container gardens have to be regularly weeded out. This is especially true if you happen to be recycling potting soil to save some money. Just go through and pluck out the weeds a couple of times per week to keep them in their place. After all, you don’t want to go come outside and find the weeds towering over your head like I did this year.

While weeding, it’s a good idea to check for any other problems such as bugs and diseases. The sooner a problem is identified, the quicker you can treat your plants. And the better off they’ll be. Problems in the garden tend to spread at truly alarming rates. Of course, some losses are inevitable but no one has to know! Hide the evidence as soon as possible in the garbage bin. Don’t put it in the compost heap because that’ll just make a bad situation worse. Doing this additionally keeps the yard looking neat and tidy. It also keeps that one malicious neighbor from reporting you to the Homeowner’s Association.

Freezing temperatures aren’t much of an issue where I live. As a result, I tend to leave my terracotta pots where they stand in the winter if the plants they contain are cold-tolerant. In areas where lots of thawing and freezing goes on in the spring, this is a mistake because the pots will crack. Prevent problems by burying the container in the garden or moving it somewhere that it’s protected from frost, such as a garage. You can even wrap these containers in protective material such as old towels, burlap sacks, or even bubble wrap for more insulation.  After all, you probably want to remain inside where it’s warm instead of dealing with broken pots outdoors in subzero temperatures.

Of course, even trusty plastic pots break occasionally. Just throw away those that are too messed up to be salvageable. Some recycling is certainly possible. For instance, I like to use broken terracotta bits as a top dressing material. (The pieces can be smashed to make them smaller if need be.) I’m nonetheless warning you: duct-taping a terracotta pot back together is probably not a good idea. The container held potting soil and plants just fine. But the pot drained too fast to keep the alpine strawberry in it happy. It died. So use at your own risk.

Of course you know you need to water all your plants every day when the weather is warm. But container-grown plants still have to be watered on a regular basis, even in the winter. If it hasn’t rained in week or the temperatures have been particularly high, you’ll want to adjust your schedule accordingly. Some in-ground species may also require additional help during periods of drought and dry weather. But container-grown plants simply can’t get water from the soil the way their contemporaries can in emergency situations. They’ll drop dead quite quickly and will have to be replaced.

I previously wrote a post on moving plants into larger containers. Gardeners need to keep in mind that most plants eventually outgrow their original containers. If you have a sad-looking plant and you have eliminated all the normal problems, it is probably root-bound. Once that happens, the plant in question will just have to be repotted in a larger container. Or you can prune both the tops and the roots. It’s a messy procedure but the one time I tried it, it worked so there is that.

If you plan on growing your trees in pots, get varieties that are grafted to appropriate root-stock. They’re usually the ones labeled dwarf or super dwarf fruit trees. However, they still do get taller than an average person and may eventually have to be planted in a yard somewhere. Most trees that are grown in containers will adapt to their living spaces. But you might not get fruit off of them after they reach maximum root capacity. And really what’s the point of that?

Citrus trees tend to be a bit less picky about cramped environments than other fruits. But whatever you do, don’t trim the baby shoots off your key lime tree just to keep the aphids away! These plants produce flowers on the new growth. Just don’t ask me how I know this. Or why I don’t think I’ll have limes for another year.

Have any tips we missed? Share them in the comments below!