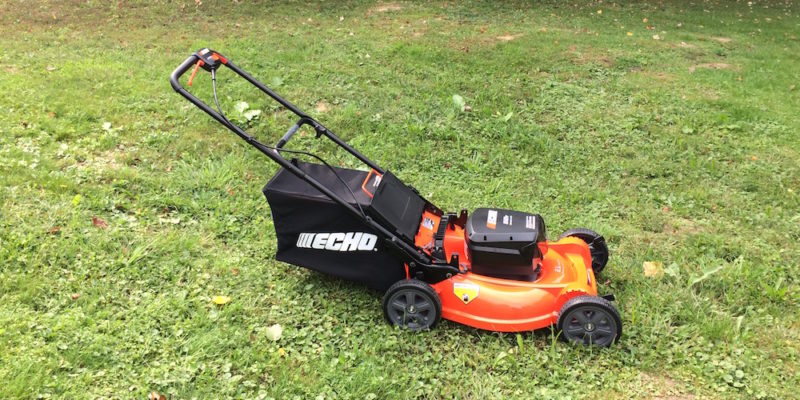 For years, I’ve used an old Craftsman gas-powered mower. It cut pretty well, since I kept the blade sharp. As the years rolled by, though, it took more and more tugs on the starter rope to coax the beast into life, and its appetite for oil was growing. When the folks from Echo offered us the opportunity to try out the Echo 58V lawnmower, I kicked the old mower to the curb, and posted a “Curb alert” on our local online bulletin board. Sure enough, 15 minutes later it was gone, and I was wondering if I’d been a bit too hasty. Naah.

The Echo 58V lawnmower arrived last fall, after the grass had gone dormant, so I didn’t get a chance to test it out. I did prep it; it was very fast and easy to get it up and running, and I didn’t even have to glance at the instructions. Lift it out of the box, unfold the handle and lock it in place with the knobs, pull back the spring pins at the base of the handle to adjust the height and lock in place. Charge up the battery, and it was good to mow! After assembling it and briefly admiring its orangeness, I folded it up, and it hibernated patiently in the corner of the shed, waiting for the first mowing of 2017.

Here’s a quick rundown on the mower’s stats, followed by a brief promo video:

These Are A Few Of My Favorite Things

Battery-powered mowers like the Echo 58V lawnmower have a lot of advantages over gas-powered mowers. The first and most obvious – they’re not gas powered. More than once over the years I’ve finally gotten my lazy butt motivated to mow, only to be thwarted by an empty gas can. No gas also means no spilled gas, no stale gas gunking things up, and no priming or flooding the carburetor.

Then there’s the other petroleum product: oil. No more topping off the oil filler before each mowing, and cleaning up the excess I invariably spill. And no more clouds of smoke wafting in my face, mingling with the freshly-mowed clouds of pollen…

My favorite advantage by far is the ease of starting the Echo 58V lawnmower. The old Craftsman needed anywhere from three (rarely) to ten or more (frequently) hefty pulls on the starter rope to get the mower fired up. On the Echo, I push a button and pull back on the lever, and the motor roars into life.

Actually, though, here’s another advantage – it doesn’t actually ROAR; it’s more like a VROOOOM. The Echo 58V lawnmower is a whole lot quieter than any other mower I’ve ever used. This makes it much less likely the neighborhood OPE vigilantes will come calling if I’m mowing early in the morning, or in the twilight of the day.

Other perks? You bet your grass! The deck on the Echo is made of composite material, rather than steel. This makes it much lighter, and you won’t ever have to worry about it rusting. Echo is so confident in the strength and durability of its composite deck that they guarantee it for life.

The final advantage of the Echo 58V lawnmower over the old gas mower? When the grass has been cut down to size, the Echo makes itself inconspicuous. In about 15 seconds, you can collapse the handle down onto the deck, and then stand the mower upright. Don’t try that with your gas mower. This allows it to occupy a lot less valuable storage space, a real boon to garage-deprived folks like me, who have to make everything fit in the shed.

To give the Echo a worthwhile workout, I waited until the grass was a bit overgrown. It had nothing to do with the fact that lawn mowing is not in my top ten list of awesome ways to spend the day. Or the fact that my Superhero name is The Procrastinator. Fair warning: Our lawn is not a contender for Better Homes & Gardens Lush Lawn of the Year. This is due to a combination of no green thumbs (or any other digits), and many years of large dogs working their large dog magic. If anyone is aware of a “Pimp My Yard” or “Extreme Lawn Makeover” program, please pass along the contact info…

Our lot is roughly 80’ x 280’. We have a very small front and side yard, both of which are level, and a moderately sloping yard in the back. Aside from the footprint of the house, we have some small garden areas, a shed, and an area at the bottom of the yard where the primary greenery is weeds, because it’s so heavily shaded.

The mower we received for review was model CLM-58V4AH, which comes with a 4.0 Ah Lithium-Ion battery. I topped up the charge on the battery before starting. Despite the fact that it hadn’t been charged in almost six months, the battery still had most of its charge. I dragged the Echo 58V lawnmower out of its corner in the shed, and unfolded the handle. The handle has three stops for height adjustment. Being tallish, I set it at the highest point, and it was very comfortable.

I attached the bag, which simply drops into position, and slid the battery into place. The mower also comes with a mulching insert, which is easy to install and remove. That’s what I would normally use, but since the grass was so thick, I wanted to bag the first cutting.

The Echo 58V lawnmower comes with a key, which serves two functions. The first is safety-related: if the key is removed, your six-year-old won’t be able to fire it up, even with the battery in place. The second is as a selector: The mower has two battery ports, and the key gets aimed at whichever battery you want to draw power from. It’s quick and easy to use.

As I mentioned, by the time I got around to this first mowing of the season, the grass was fairly thick and tall in much of the yard. I was a little concerned that the battery-powered mower might not have the “oomph” needed to power through the jungle. Once again I hoped I hadn’t been too hasty in disposing of the gas mower…

I brought the mower to an area where the grass was slightly shorter, pushed the button, and pulled back the handle. Two seconds later, the motor was vrooming away, making a LOT less noise than our old gas-fired beast. I started pushing the mower through the grass, and it had no trouble at all with the grass in that area, which was about 4-5” tall.

Then it was on to the big time. As the mower hit the taller, thicker part of the yard, the motor slowed slightly, for a second or so, then ratcheted up the power and forged on. After just a few passes across the yard, the bag was full. I emptied it, and got back to work.

This is another area where the Echo 58V lawnmower shines over the old gas mower: Every time I needed to empty the bag on the old mower, it had to be shut down. Then I had to cross my fingers and hope it would re-start before my heart failed. With the Echo, the mower shut down instantly when the handle was released, and started instantly when the bag was empty and I was ready to resume.

Despite the large proportion of overgrown grass, the Echo 58V lawnmower got it all cut, on a single charge, and the lawn came out looking good. As good as it ever looks, anyway. The blade cut evenly, and the lightweight mower was easy to use, even on our hill, despite the fact that the mower is not self-propelled. When I was finished, the mower reclaimed its little patch of real estate in the shed.

Step On The Gas

Cordless mowers have improved a lot over the past few years. More powerful Lithium-Ion batteries have combined with brushless motors to produce cordless mowers that can hang with their gas-drinking brethren. The average homeowner would likely be very happy with the performance of the Echo 58V lawnmower; I sure am.

The drawbacks? Some complain they’re not as powerful as gas-powered mowers, and can’t handle a large overgrown lot. Guess what – neither could my old gas-powered mower. For a large, overgrown lot, you need a much beefier machine. The Echo did fine going through a fair-sized expanse of moderately overgrown grass in our yard.

The only other downside is that if you have a large yard, one battery may not get you through it. If that’s the case, you can either take a 45-minute break while the battery recharges, or buy another 4.0 Ah battery. At the current suggested retail price of around $169, they’re not cheap, but they’re guaranteed for five years. If it lasts only as long as the warranty, that works out to about $34 a year to power the beast. Weigh that against how much you’d spend on gas and oil to mow your big lot, and factor in the elimination of the hassles involved, and suddenly it sounds pretty reasonable.

The manufacturer backs the Echo 58V lawnmower with a very robust guarantee. The mower, battery, and charger are all backed by a 90-day money-back guarantee, and a five-year consumer warranty (two year commercial). If you’re ready to give up the gas, oil and starter-rope workout regimen, kick YOUR gas mower to the curb (or give it away on Craigslist), mosey over to the Home Depot, and plunk down some green to get something orange. The Echo 58V Lawnmower retails at the very affordable price point of around $399: 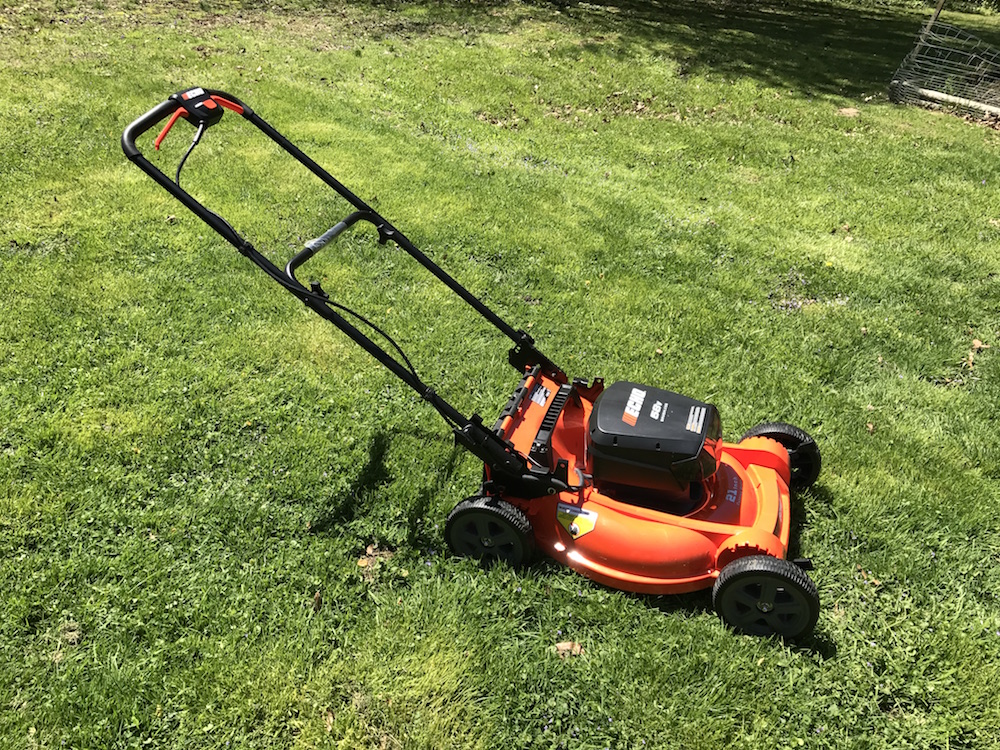