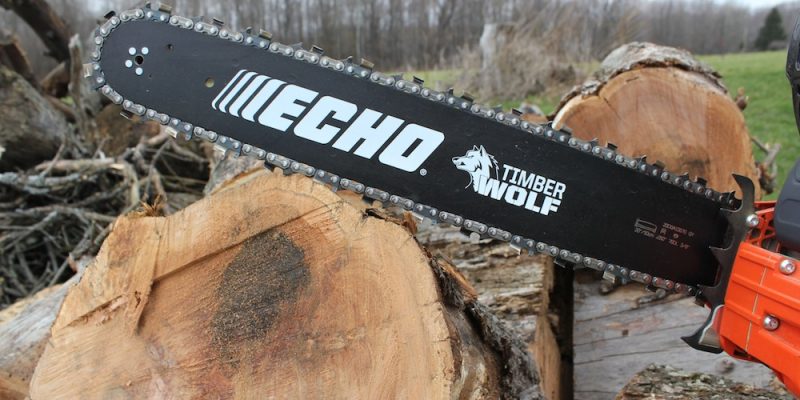 Our little farm south of Erie has electric heat (boo). It also has two wood stoves and around five acres of trees (yay!). In an effort to keep those trees in line, and the stoves fed (it sometimes gets a mite chilly up there), I drag out my chainsaw every so often, fire it up, and make some sawdust fly. When the folks at Echo sent us their Echo CS590 Timber Wolf chain saw to evaluate, it seemed like a good opportunity to top off the firewood supply.

The Echo CS590 is aimed at property owners just like me – with several wooded acres, or a smaller property with a lot of trees. This saw would be overkill for someone who just wants to do a little pruning every year or so; its power is designed for frequent and extended use. Hell, just the fact that it has a rugged name like Timber Wolf lets you know this saw means business! Here are the specs from Echo:

Out Of The Box – Let’s Be Safe Out There!

The Echo CS590 comes with two manuals. One is the typical instruction manual, the other is a chain saw safety manual. Both are excellent – they’re very clearly written, seemingly by someone who speaks English as a first language, and contain a LOT of useful information. (I wish my Husqvarna chain saw manual was this good!) They cover pretty much every aspect of operating and maintaining the saw. As a bonus, they provide techniques and safety advice for performing various tasks with the saw, from limbing, to felling a tree, to bucking it up. They also explain what kickback is and what causes it, something it pays to be very aware of. Even though I’ve done a fair amount of cutting, I picked up some good tips.

A chain saw is an inherently dangerous tool, but Echo has taken steps to make the CS590 as safe as possible. One safety feature, included on all Echo chain saws, is a Kick Guard® attachment for the tip of the bar, to prevent rotational kickback. The Echo CS590 also has a chain brake, which is designed to stop the chain’s rotation immediately if kickback occurs. The saw comes with a low-kickback guide bar and saw chain. A chain catcher, located at the base of the bar, is designed to reduce the risk of the operator’s hand being hit by a broken or derailed chain. Their web site has several videos demonstrating chain saw safety and operating techniques. Another inspirational video to help you get in a proper frame of mind for chopping down trees is Monty Python’s Lumberjack song…

The Echo CS590 comes mostly assembled. I just had to install the bar and chain, which was simple to do using the combination tool that comes with the saw. I also installed the Kick Guard on the tip, as recommended in the manual. That was quick and easy, too, and just took a minute.


The engine on the Echo CS590 is a two-stroke model, so it needs a gas/oil mix to run. The instructions say to use a 50:1 ratio, which means 2.6 ounces of oil to a gallon of gas. Echo also calls for use of a mid-grade (89 octane) fuel, to prevent knocking and possible engine damage. After mixing the oil and gas well, I filled the tank. The saw holds almost 22 ounces, which is a pretty decent amount of fuel.


After adding chain lube to its 10-ounce reservoir, and getting my safety gear together, I was ready to fire it up. (Note: I forgot to bring along two essential pieces of chain saw safety gear – steel toed shoes and a flannel shirt. I’m a semi-professional junior lumberjack; you should NEVER attempt to cut wood without those items—especially the shirt). All gassed up and ready to cut, the saw weighs about 18 pounds.

The tree I had originally intended to cut as a test of the new saw had splintered partway up, and was leaning on a couple of other trees. After taking a closer look, and noting the tangle of pricker bushes all around the base, the way the tree was barely connected at the break, and the overall sketchiness of the whole situation, I decided not to become fodder for a HomeFail post. The tree still has to come down, but I’ll do it when I have more helpers available.


I looked around for a less-hazardous but equally deserving tree to fell, and decided on a tree near our fire pit. The tree was in tough shape, and had been partly taken down by the previous owners, but still had the main trunk, which measured about 20” by 23”, and was about 14’ tall. It was pretty rotted around the base of the trunk, but the rest of it was still solid wood. The site required a bit of prep, as all the limbs that had been cut off were in a tangled heap at the base of the tree. I cleared the area around the base of the tree, leaving myself enough room to maneuver around it safely.

The Echo CS590 comes with a handy quick-start card. We recommend you take a good look at the manual before first using this, or any, chainsaw. If you’re anything like me, though, if more than 24 hours pass before I use it again, I’ll be muttering to myself and trying to remember the exact sequence of actions to fire it up. THAT’S where the quick-start guide comes in handy.

Getting the Echo CS590 running is actually pretty straightforward. Push forward on the chain brake to engage it, flip the ignition switch up to the “ON” position, push the decompression button, and pull out the choke. Now pull on the starter rope a few times until the engine coughs. Push the choke in, push the decompression button again, and tug the starter rope until the saw is running, then just pull the trigger to let the saw idle.

The Echo CS590 Makes Some Sawdust!

The top of the tree was leaning to the northeast, so I made my notch cut on that side of the tree. The saw had plenty of power, and easily made the cuts. Then I maneuvered around the back to make the felling cut. Again, the Echo CS590 easily sliced through the tree.


Unfortunately, because the tree was around 23” across, the Kick Guard on the end of the bar stopped me from being able to make the entire back cut. I shut off the saw, grabbed a wrench, and did a little field surgery, temporarily removing the Kick Guard. The saw started back up with one pull, and I easily finished the cut – down came the tree.


Once the tree was down, the Echo CS590 made short work of bucking it up. The tree was pretty dense hardwood, possibly some sort of fruit tree. The saw bogged down a couple of times, for a second or two, while cutting through the thickest parts of the trunk. After backing the saw off a touch, it tore through the rest of the cut with no problem, and I quickly had the entire tree cut up. 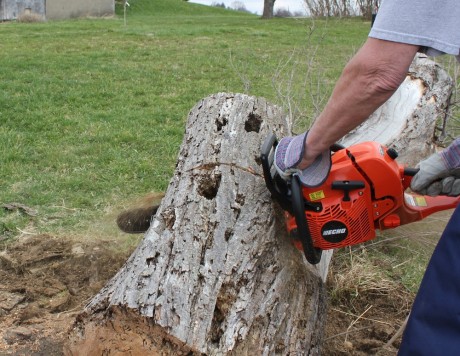 Impressions On The Timber Wolf

After my introductory experience with the Echo CS590, I was impressed. The saw is well designed, and feels solidly constructed. It starts easily, thanks to the decompression feature. The 60 cc engine runs strongly, and has less vibration than other chain saws I’ve used. It’s easy to remove the air cleaner – no tool is required, just twist a knob. Chain tension adjustments are quick and easy with the provided tool, and the translucent fuel tank allows you to see how much fuel you have left. The weight and balance are good, and the saw is comfortable to use. The saw has an automatic chain oiler (no more button pressing!), and it’s adjustable, so you can make sure the chain stays well-lubed on hot, dusty days. 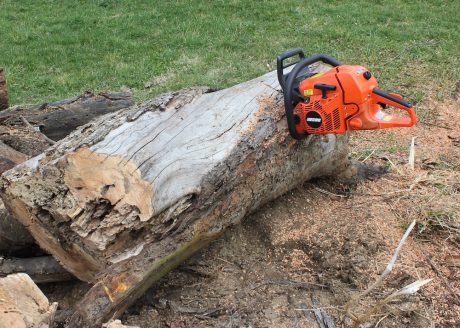 There’s one other feature that may be of interest. Although the saw is sold with either an 18” or 20” bar, the manual lists three other optional bars and chains the Echo CS590 can use: 16”, 24” and 27”. That should take care of pretty much any tree most farmers, ranchers or homeowners are likely to come up against.


The Echo CS590 is a big step up from the average “homeowner” chain saw. If you do a lot of tree work, and want a saw that’s powerful and reliable, I believe the Echo would be an excellent saw to consider. The saw is covered by a generous five-year warranty (lifetime on the electronic ignition module). The CS590 has excellent reviews on both Amazon and Home Depot’s web sites, but at $399, it’s $79 cheaper at Home Depot. 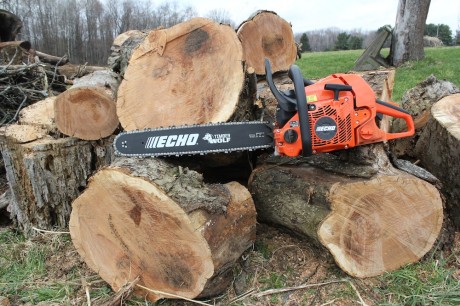