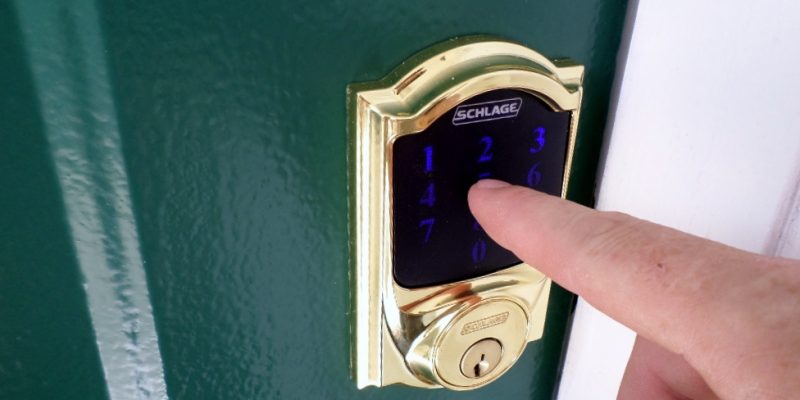 Still have a house key? That’ so 2000-and-late! Thanks to Schlage’s Touchscreen Deadbolt with Alarm, I don’t have to carry around frivolous keys to get into my house. Heck, with this keyless locking deadbolt system for your existing door, you can even use your smartphone to open the door! Now if I could only remember the code to get in…

Schlage is well known for their great locking systems for the home and their new touchscreen deadbolt with built-in alarm has a lot to offer. I was lucky enough to get a chance to review one of these touchscreen locks from Schlage and I was very happy with the way it’s built and designed.

While a deadbolt install is a relatively easy installation, I wasn’t so sure about the Schlage lock when I opened it up. They are notorious in my opinion for being very difficult to assemble simply because they are precision locks and require everything to be perfectly installed for good, clean operation.

I was really surprised at how simple it seemed to install. I first had to remove the old strike plate, bolt and lock which is pretty basic – just four screws really. Power tools are a big no-no as they can strip screws, threads and even break hardware when the force of a power driver/drill is applied to these soft metals. Stick with the hand tools.

Since the motor in the lock (yes there’s a motor) has to turn the lock without too much force, they ask that you test the striker and bolt to ensure they work smoothly before installing the rest of the mechanism. Installing the bolt is just like any other deadbolt bolt piece – be sure the part that reads “Top” is up and insert the two screws into the edge of the door where the bolt protrudes.

The next step is a little more complicated. It involves installing a Grade 1 striker plate into the frame. That means you need to make sure the striker hole in the door frame is at least one inch deep. You’ll also have to modify the existing striker plate pocket because there are actually two striker plates that go into the pocket – a thicker one that holds the two large reinforcement screws and the other thinner escutcheon plate that covers the reinforcement plate and screws. These both have to fit flush with the door frame, so a good chiseling or routing is needed to get the right depth for the striker pocket.

I chose to use a router since I needed to take out quite a bit of door frame. I opened the bolt and closed it against the frame. With a pencil, I lightly marked the placement of the bolt. This way, I could use the pencil marks to align the striker plate properly for routing the pocket.

After the bolt is aligned, it’s easy enough to assemble the rest of the product. There’s small wire that needs to snake through the handle hole and around the back of the interior control panel that can be tricky to keep in place, but with a little light handed work, it fit in fine.

The other issue with installation are these four buttons that stick out of the exterior handle hole. They have to all fit into the hole perfectly or else the door alarm won’t work correctly. It took me a few minutes to figure out how to get them all to fit, hold the other side of the lock, keep the wire out of the way and screw it all together. It was a good thing the camera person lent me a helping hand or I might have been there all day.

Once everything is tightened and aligned, you can then install the batteries and set the codes. It’s a fairly easy procedure – or so they claim. I found it to be rather confusing at first and wasn’t impressed at all with how the instruction for programming was laid out in the provided manual. After much trial and error, I found that with the right series of provided codes, multiple button presses and flashing lights/beep interpretations, I was able to enter a private entrance code for each family member, turn on the alarm so it beeps every time the door opens and enable the WIFI device inside of the lock for use with Nexus and smartphone operation. I felt like Luke Skywalker must have felt when he communicated with R2-D2 and everybody else just stares at him slack-jaw and asks “what’d it say?”

The keypad works great, it’s very bright and easy to press. My family and I were pleased with how simple it is to open and close the door, and the kid loves it. My favorite part is that when you leave the house, you just close the door, press the large button labeled ”Schlage” on top of the keyless entry pad and the door locks automatically. It even displays a little green check mark to tell you it’s locked or a big red X and a beep to warn you that you need to try again.

What’s really great about having high level deadbolt lock security, a keyless/wireless entry pad and alarm system all rolled into one is that no matter where you live, you can beef up the security without having to sign up with a pricey security company and install an expensive alarm system. The Schlage Touchscreen Deadbolt with Alarm is priced modestly at well under $200 and is one cost effective alternative to hiring a professional alarm company to wire and monitor your home. Of course, if you want more than just your door(s) protected, you could always install your own wireless alarm system. The only “problem” with installing this new deadbolt is that it looks so nice; you’re going to want to replace all of your door hardware to match the sleek, modern design of the Schlage Touchscreen Deadbolt with Alarm.

You can find the Schlage Touchscreen Deadbolt with Built-In Alarm

in four different finishes, at just under $170 via Amazon.