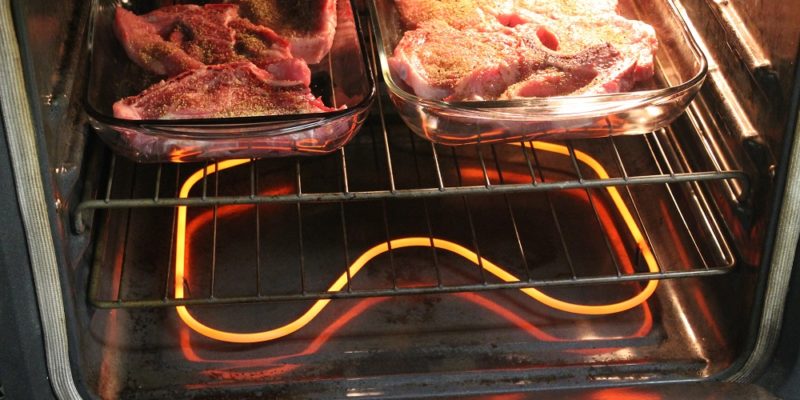 As creatures of convenience, we love our household appliances. Except when they break down, at which time we emit colorful language and threaten trips to the landfill. But a major appliance failure doesn’t always mean “major expense” or “major pain in the glutes”. Some repairs are quite simple (and dirt cheap) if you’re willing to tackle them yourself. Today we’re looking at a typical glass cooktop electric range that has assumed room temperature. The bake element and part of one stove element have stopped working. You may be surprised just how quick, cheap and easy it is to tackle electric stove repairs and get your appliance working like new again. And rather than expensive service calls, you can put that money towards some of the awesome tools we review here at Home Fixated!

If your electric stove has exposed elements, replacement is incredibly simple. Just unplug the old, plug in the new and you’re done in mere seconds. But what if you have a bad bake or broil element in the oven? And what about those ranges with a glass top cooking surface? Believe it or not, they too are incredibly simple to pull, test and replace.

First of all, this tutorial does not cover induction cooktops (sorry). And obviously, element replacement isn’t going to solve every range failure. But burnt-out elements are by far the most common problem with electric ranges (and the bread and butter of the appliance repair technician). Given how easy they are to replace, if you’re comfortable taking on a minor stove repair job you can have your range up and running in no time. And for far cheaper than a service call.

Safety First with Stove Repairs! – Or It Might Be Your Last

If you are apprehensive about messing with electrical devices (UN-powered, of course), there is no shame in calling in the pros. However, if you feel up to the task, read on and save yourself a bunch of money.

Replacing bad heating elements in an electric range can almost always be done without even pulling the unit away from the wall. But if you do, go ahead and unplug it. If you don’t unplug it, switch off the circuit breaker then test to verify that the appliance is indeed not receiving power. This can be done by turning on a stove element that you know was working (be sure to turn it back off when you’re done) and opening the oven door to verify that the light no longer powers on (assuming it did before).

Make sure no one goes near the breaker box until the job is done.

How To Know If An Electric Heating Element Is Bad

You obviously don’t want to just start buying and replacing elements without knowing it will solve your problem. If all of your elements have stopped working at the same time, you probably have other problems. Start by checking the circuit breaker. If that’s OK, you may need to call in a repair tech.

Stove Repairs Pro Tip – A bad element will often have a visibly burnt spot. You may have even powered it on and witnessed an orange fiery flare spraying from somewhere along the body of the element. These are sure signs that it’s burnt out.

But you can’t always detect a bad element just by looking. If there are no visible signs of burnout, it’s time to grab an ohmmeter and check for continuity. But first, we have to pull the element; let’s start with my dead oven. Then we’ll deal with the glass cooktop.

1st Course: No Bake Oven – When The Hot Box Gives You The Cold Shoulder

I do almost all of the cooking in our household; it just works out best with our schedule. Plus, I enjoy it. Recently, when I went to preheat the oven, the bake element briefly glowed red then informed me that I’m grilling out instead. Everything else worked fine, but the oven was a no go (unless I wanted to broil. I did not.).

The next morning I switched off the breaker then pulled the element for testing. A quick check with a multimeter confirmed that it had given up the ghost. To my amazement, I found replacements online as cheaply as $11 with free shipping! But I decided not to wait for delivery and bought locally instead. Amazon has quite a few appliance replacement parts, and you can find other appliance replacement parts specialty stores online as well.

A ride to the local appliance parts dealer, $28 + tax (a small price to fix my oven the same day), and an oven rack full of pork chops later and I was considered a local hero for my stellar stove repairs. Well, in my own home… and by my own self, at least.

While you have the element out, go ahead and take the opportunity to give the oven a good scrubbing. The baked on stuff might not go away, but at least anything halfway loose or soft will be easier to get to.

When you plug in the new element, make sure the connectors are snug. Then gently push the wires back into the hole – taking care that they don’t rest against the metal – and reinstall the screws.

If your female quick connector(s) are burnt or brittle, replace them (a little heat discoloration is normal). Use only properly rated crimp connectors and do not solder.

As you might suspect, replacing a broil element is just like replacing a bake element, only at the top of the oven cavity.

2nd Course: The Glass Top Stove – Yes, These Elements Can Be Replaced

When I first moved into this place, there was one stove element that worked only halfway. The outer ring got hot, but not the inside. So it was barely useful for larger pans, and completely useless for anything small. But I got used to it, avoided using it for small pots and eventually, for the most part, forgot about it.

But the day after I fixed the oven, it occurred to me that I should probably stop being lazy and fix the burner with an electric stove burner replacement as well. After all, I cook virtually every day (unless we go out for dinner) and it sure would be nice to have a fully functional stove for a change. I found new electric stove burner replacements online for $50 (w/ free shipping) so I went ahead and ordered one.

Getting A Rise Out Of Your Cooktop – Electric Stove Repairs

Now that the power is off to the range (you did kill the breaker or unplug the unit from the wall, right?) and the screws and oven vent are removed, the front of the glass cooktop should lift up (it’s hinged in the rear). Carefully prop the top with a piece of wood. The glass can break if it crashes down or flexes too much. So support it near the middle, if possible, and make sure the prop cannot slip.

The elements should be held to the top in pairs by steel brackets that span either left to right or front to back. Before removing the bad element, be sure to mark to mounting positions for it and the other one on the same support bracket.

Another stove repairs pro tip – Before removing anything, take a photo of the connections and mark the positions of the element mounting tabs. Replacing glass cooktop elements is easy, but there is a lot more going on under here than in the oven cavity. The last thing you want to do is take things loose then forget what goes where.

The element has two terminal blocks. One powers the heating element. The other is for the sensor that triggers the indicator light that tells you the cooktop is hot. Two wires come pre-installed; leave them as they are.

Unscrew the support bracket and lower the parts gently so that nothing breaks and no wires get pulled loose.

Transfer The Clips – Replacing Elements In A Glass Top Stove

The metal housing on the back of the element assembly has a bunch of holes around the edge. They are often numbered, but not always. My new one is but the old one isn’t.

Lay the old and new elements side by side (face down) and rotate them to the same orientation. Mark the mounting clip positions on the old element before removing and transferring them to the new one.

Avoid A Hot Mess By Paying Close Attention To The Details

Before removing the clips from the old element, use a marker to identify their positions. If the mounting holes are numbered on both assemblies, verify that they are numbered the same (that the same number is in the same radial position on both). If not, simply count the holes – starting at one of the terminal blocks – to find the correct location.

While attaching the clips to the new electric stove burner replacements assembly, you may be concerned about the screws hitting the white heat shield material. Don’t worry; it’s soft (kind of like floral foam) and the screw will bore its way in without damage. Drive the screw until it’s fully seated, but don’t over-tighten.

Bring The Heat Without Burning A Hole In Your Wallet

As DIYers, we sometimes take on jobs others would rather hire out. There are times when what at first may appear to be a serious issue requires only a minor repair. Wisdom and a little healthy caution can help discern one from the other. But we’re certainly not suggesting you get in over your head or take risks with something that makes you uncomfortable. However, it is my personal opinion that most handy adults are capable of the repairs described above.

A Hot Reminder To Play It Cool

When it comes to electric stove repairs, never attempt to work on anything that’s plugged into an energized electrical circuit. The 220V that powers your range is downright deadly! Keep your wits about you and always verify that the power has been cut off at the breaker box (better yet, unplug the unit from the wall) before even thinking about pulling the first screw. And it should go without saying, but make sure all heating elements have had plenty of time to cool down before attempting any repairs.

Ensure that no one tampers with the breakers until the job is completely done and everything has been reassembled and ready to be powered on again. Saving money is great. But saving lives is far more important. With care, you can easily do both.