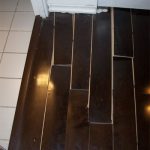 Four years ago when we bought our condo, we knew right away that the carpet had to go.  It was old, stained, and smelled of a charming blend of cat, hot dog water and a sickly sweet perfume that attempted to cover the combination up. We figured we had two real choices: real hardwood floors or go for the cheaper, easier-to-install engineered hardwood floors. Since my favorite words – “cheaper” and “easier” – accompany the description of engineered hardwood, we went with that.

For those who haven’t been introduced to this product, engineered hardwood are planks in which the top few layers are made of real wood (and available in nearly every type and color) that have been sealed onto cheaper wood – specifically, particle board. The HDF or MDF has been shaped so that the planks can “click” in place with each other, making installation fairly simple.

I had been warned that engineered hardwood could be problematic (“buckling” was the term I heard used), but as long as you weren’t installing it anywhere that water would likely get to it (like in a bathroom or kitchen), we should be fine.

As you can see from the picture, not all is “fine” – in fact, things are far from fine. Wanna know what happened?

I noticed a while ago that a couple of the boards looked as if they were separating from each other. It wasn’t major – just a little space – but seeing as we had dark hardwood, the separation exposed the pale particle board, which wasn’t very aesthetically pleasing. Friends of ours who also had engineered hardwood mentioned the same thing had happened to theirs, but that the boards snapped back together on their own shortly after. I was hopeful and so I didn’t do anything. Then, they started to lift.

When we walked over them, we could feel (and hear) a real bounce to the floor. The lift became more and more visual, to the point that the boards then started to tepee at their connecting seams. An entire area of our flooring felt incredibly under pressure to the point that other areas were starting to become affected.

I attempted to contact the manufacturer of the engineered flooring by phone and e-mail (and later through a contractor whom I knew and who had done business with them) to see if there was anything I could do to fix it or prevent it from doing more damage. I was completely ignored. I really should call their crap customer service out in this post, but as Marc likes to keep HomeFixated a “happy place”, I will restrain myself and not unleash the hellfire that burns within me.

I eventually lifted up the baseboard (and inadvertently removed some drywall – great!) to see if I could relieve pressure. This did nothing. The boards continued to warp and curve and we eventually took one out to get a good look at it (the rest of the affected boards heaved and buckled immediately).  From what we can tell and from what others who have looked at it could tell, the was no actual water damage in the area and the installation (of both the flooring the baseboards) was done correctly. However, the boards (specifically, the MDF) were curving badly.

We’ve deduced that the most likely culprit for the expansion of the MDF was steam coming from our bathroom. Our friends who also experienced board separation noted it happened to their floors on particularly humid days.

In other words, it’s the sort of thing we have very little control over, lest we stop showering all together, something that would undoubtedly cause other problems in our lives.

I now have what friends have coined The Rage™. We have to rip up the engineered hardwood in that section (small mercy: the area impacted is in our entrance area only – we’re hoping we can keep the flooring everywhere else) and replace it with humidity-handling tile. Ugh.

I’ll let you know how the process of removing and replacing this flooring goes (including how much alcohol I consume during that time. Prediction: LOTS).