“OK, who’s going to give me five dollars?”  That’s how the bidding started at my first IRS auction.  A co-worker had told me about his old place of work whose tools, machinery, inventory and whatever else could be dug up on the property was to be auctioned off for back taxes.  From a beam saw, CNC machine, and forklift to a refrigerator that smelled, a printer that didn’t work, and a stack of wood in the corner, everything was up for bid.

But how does this work?  How much time do you have?  Do I get my own paddle?  Or do I just do a little subtle nod or hand movement like in the movies?

By the end of the day I knew I wanted to write about this event as it’s a great way to pick up some stuff cheap – maybe even find a diamond in the rough, and at the very least have a little fun.

So now that I’m a wily old auction veteran, here’s what I learned.  Everything will have a number assigned to it and you will be given a list of everything that’s up for bid.  Check out the items that look interesting.  Look for age, wear and tear, make and model, and so forth.  Auctions usually have an inspection day where you are allowed to come in and scope everything out.  This’ll give you time to check out how much the items you’re interested in go for new, so you can set your high bid accordingly. 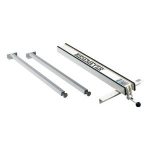 Another thing to look for is what’s included with each item.  Let’s say the ticket says Router, No. 62, but it comes on a table with wheels and an 8-foot Biesemeyer Table Saw Fence

, and if you look underneath?  There’s a really cool Rockler Router Lift FX, is all!  That’ll be over $200 minimum for that bad boy!

So what do you bid for what looks good?  I made some columns on a sheet of paper with different headings:  First – I Could Really Use This So Here’s a Fairly High Bid That I’ll Go For.  Second – Don’t Need It, Be Cool to Have It, Way Easy to Explain to the Wife If Bid Stays Under “X.”  Last – Do You Know How Much That Baby is New?  That’s a Steal!  I’ll Take It!  This last column is usually generated on the fly and can get you in a lot of trouble.  It’s up to you whether or not you even allow this column to exist.

So now that you’ve checked everything out and decided what you think you want, don’t forget you have to get everything you scored back to your place.  Can you load it by hand?  Will you need a forklift?

That 40-foot run of 8-foot-high plywood racks that I got for 30 bucks didn’t include the materials stacked on them.  Um, it occurred to me – after I won the bid, of course – how do I get all the stuff off the racks?   I know!  I’ll borrow the forklift that guy bought and unload everything in 15 minutes!  Hell, I’ll even slip him a twenty just ‘cause I’m a good guy.

As is the case with all best laid plans, this one sucked.  Turned out Mr. Forklift was a little miffed that I outbid him for a dust collector that was part of a set of three and I won them all.  (More on my strategy on this win in a future article.) So now Mr. Doesn’t Play Well With Others wouldn’t let me borrow his own new toy.  Time for Plan B.

While I waited for Plan B to formulate, I silently let the God of Hydraulics know what a negative guy Mr. Fork Boy was, and if he/she wanted to allow any unfortunate mishaps to occur, that would be OK with me and all that’s right in the world.

Turned out Plan B included a really big forklift brought to the site the next day to move the beam saw and CNC machines that someone else had won in the bidding wars.  After I shot the shinola with the driver of this big lift and slipped him the aforementioned twenty, he said I could use it at lunch time.  Bingo!  So now Mr. “What’s this pool of oil doing under my forklift?” could take his stupid yellow toy with the dinky wheels and …

We all know karma rules, but it’s not often you get to see it in action.

There’s not enough space to tell everything that you need to know at auctions this time around, so check me out in 30 and start looking for auctions in your area in the meantime.  Go to “trip dub” dot IRSauctions dot gov and see what’s up.