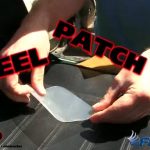 We’re coming upon what many people hope is the tail-end of a long and brutal recession. I know, I know. . . supposedly the recession ended in June 2009. Despite that government stat, many in the US suffer in a wasteland of trailing economic indicators. From unemployment, to axed discretionary income (is eating discretionary?), lots of us are fixing, repairing, and otherwise MacGyver-ing what’s left of our belongings to help them go that extra mile, or ten. We just need that 20 year old tool to last until the economy is up and running on all cylinders. You know, like back when we all used to drive Ferraris, snort cocaine off the curvaceous parts of high-priced escorts, and buy multi-million dollar houses on stated income. The good times! In the meantime, our sponsor Fastcap is here to help us salvage what we have until the good times are back.

Allow me to introduce the Fastcap FastPatch! Actually, allow me to let Fastcap introduce it, that’s much easier:

The FastPatch, protects, preserves and seals (even underwater)! If I were on a pool floatie stranded over the sharp coral of an isolated tropical reef, it’s the number one thing I’d want with me (other than a floatation device that can’t be punctured. . . oh. . . . and a Mai Tai). But it’s also great for patching stuff when you’re not stranded at sea. Furniture, rain clothing, tents, tarps, and more can all be made to tide us over until the next period of economic hedonism. Which has me wondering, can I use a FastPatch to patch the most recent leak in our roof? I’m guessing that’s not recommended, but hey, what would a recessionary MacGyver do (WWRMD)?

Just $7.99 of your unemployment income or intersection hand-outs buys you five FastPatches. You can pick them up straight from Fastcap, quick, before your pre-recession computer dies!