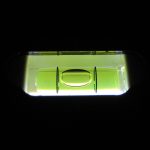 Can a level be sexy? Oh yes it can! The Festool M0106 48″ Installer’s Installer’s Level sporting lighted vials is what happens when you pair two Teutonic high quality tool powerhouses together. Festool + Stabila = one really slick level. First, let’s cover the basics you’ll find in most Stabila levels of this size, then we’ll get to the sexy parts, I promise. Don’t worry, it’s safe for work. 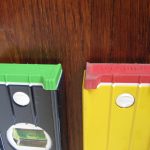 If you own or are familiar with Stabila levels, you’ll feel right at home with the Festool M0106. Stabila generally has the best reputation around when it comes to levels. The Festool M0106 is no exception, designed and manufactured exclusively for Festool by Stabila, and made in Germany. Rubberized end caps with little gripper feet on one side make keeping your level in place a solid act of precision, rather than a slippery, wall-scratching affair. I can also attest to their utility when a carpenter I was working with dropped my Stabila level off a 2nd story balcony onto concrete. I’m not sure who looked more worried as it plummeted to sure doom, me, or the carpenter. A look of relief passed both of our faces when it hit end first, bounced a bit, and was completely true and intact despite the abuse. 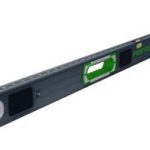 Like most Stabila levels, the Festool Installer’s Level has a very solid feel. It also sports the exact same easy to grip rubberized handles as a 6′ Stabila level I own, with the only difference being the handles are green and white rather than red and white. Speaking of colors, when I first saw the level I thought, “Cool! A black level.” It’s practically a ninja tool! Then I caught a hint of very dark blue (a color you may be familiar with in relation to Festool). Depending on lighting and who you ask, the Festool M0106 is either very dark blue or black, with typical Festool / Incredible Hulk green accents. The 48″ level sports one vial on each end, and a center vial. This is where it gets interesting. 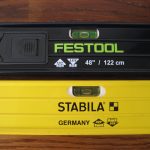 Two out of the three vials (the center vial and one of the end vials) have the option for illumination. That’s right, lighted vials! A smooth-sliding, wide thumb switch lets you easily fire up the built in LED for each vial independently. When lit, the vials are literally brilliant. You can be in a pitch black room, in a pitch black closet and still make a perfectly accurate adjustment for level in the eerily pleasing glow. If you are in a pitch black room doing carpentry, I hope your nail gun is illuminated too though. However, the LED’s lighted vials are useful in low light settings that aren’t in a Silence of the Lambs dungeon basement too. Since you can easily switch each LED on and off, it’s convenient to shed a little light on the subject only when needed. The rest of the time, you’ve just got a really sexy blue/black and green Festool level, that performs like its yellow siblings. Oh, and the actual LED light assemblies easily pop out with a little prying. Four phillips screws then lead to the batteries (two CR 2016 batteries per light). In a pinch, the LED boxes also make for a handy portable light. The light on the vials themselves is crystal clear, with no glare or harshness to it.

The Festool M0106 Installer’s level sports a metal cylinder at one end so you can easily store it on a nail or peg board. And the center level is bridged for continuous scribing, saving you from that awkward moment when you draw a laser-like scribe line except for the notched vial section where your pencil leaves a jagged hole in your otherwise perfect line. Festool and Stabila also thoughtfully integrated and Imperial and Metric scale with a center point right over the middle of the center vial for easy layouts. 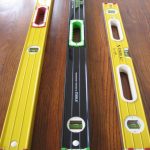 So what are the downsides? The batteries and their access was less than convenient. It would have been nice to see more standard aaa batteries used, and in an enclosure that didn’t require removing 4 tiny screws. However, unless you only work at night and without electricity these batteries will likely last a while before needing to be swapped out. Also, to say that a Festool product is expensive will come as a shock to no one. We poked around and found the Stabila 37816 48-Inch and 16-Inch Aluminum Box Beam Level Set

for about $103. However, it lacks the bridged center vial, measurement scale, lighted vials, and the sexy paint job. Depending on the type of work you do, whether those differences add up to a $46 difference is up to you. If you regularly find yourself installing in low light conditions, or on job sites (or your house) before electricity is hooked up, then the Festool M0106 is a no-brainer. Even if you don’t deal in low-light scenarios frequently, the useful features, optional illumination, and coincidental sexiness might make it worth the extra coin.

You can pick up the Festool 48″ Installer’s Level

for $149 while the limited quantities last.