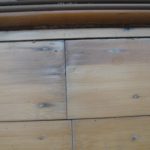 Even with the use of flashing, water penetration may continue to be an issue. High winds are often the culprit and as seen in this picture, rot and warping can be the result. Flashing tape is a good back-up in these cases. Ideally, it should be applied under the flashing. It’s also used to cover the seams under siding and shingles. In this case though, we used it over the existing flashing to cover and seal a gap that had been missed during the original door installation.

Even Hair-Thin Gaps Can Let Water In

The previous homeowners did the right thing by installing flashing around and under the door; but they had overlooked a hair-thin gap way up under the threshold where it butted against the house. Under normal circumstances, that tiny gap probably wouldn’t have mattered much. Unfortunately, we live in an area plagued with gale force winds year round and yes…they’re strong enough to drive rain water up under the flashing and in through that miniscule seam. A small section of the relatively new bamboo floor is now shot, and to be perfectly honest, I’m not too jazzed about having to add floor repair and install to my list of summer to-dos.

To remedy the problem, rather than ripping everything out, which would have included a fair section of the deck, or cramming the seam full of caulk (tempting), we decided to seal the joint with flashing tape. This way, we got away with removing only the two decking boards closest to the house to access the trouble spot.

Flashing tape is super-tacky, (but then, so is much of my husband’s summer wardrobe). It helps to press it into place while peeling off the backing as you go, rather than removing the backing all at once, especially if a long section requires sealing. This lesson I learned after I screwed up and dropped one end of the tape, which ripped a chunk of paint off the side of the house when I pulled it off. (Add paint touch-up to floor repair.)

Maybe next week I can manage to walk through the screen door when it’s closed or back my car into the retaining wall.

For relatively little cost and minimal demo, this stuff should do the trick – flashing tape is available on Amazon starting at just under $14.00.