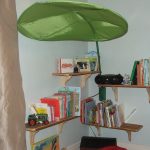 Some time ago Brad wrote a pretty good article about reclaiming wood. So on the heels of that story, I thought I’d share my own experiences with reclaiming wood. As you may have gathered from my previous articles, I am 1) incredibly lazy and 2) incredibly cheap, and that may be why I love the idea of using reclaimed wood. OK, granted – it rarely means you get to be lazy, but it definitely means you get to be cheap. I love to reclaim lumber from old pallets and construction scrap.

As you may remember, I/we are expecting our second child, although by the time you read this we will likely be in full no sleep/dirty diaper mode. With this new bundle of joy on the way, we rearranged rooms and gave our son a larger room with a normal bed which you can read about in a previous article about distressed faux finish. Apart from the bed and storage area, we also wanted to give him a little reading nook with shelves for all the Dr. Seuss, Eric Carle and Virginia Lee Burton books he has.

However, we wanted to do some unconventional shelves instead of a bookcase. Lucky for me we in fact had an extra pine board bookcase.  Is lucky the right word here? Anyway, it was actually in the house when we moved in and was in so-so shape, but the shelves were not spaced far enough apart for the larger books that our little man had. So in a twist of fate that no man could explain, my wife actually suggested that I reclaim the wood and turn it into shelves.  Miracles happen on occasion, even when you least expect them to.

First things first.  I tore apart the shelves.  While this could have been done the fun way, using a framing hammer or the Douglas Hammer, I opted for just backing out the screws since I didn’t want to damage the lumber any more than it already was. The five shelves were a little bowed and cupped but not nearly as bad as I thought they would be, and there was some damage to the leading edge of each of the shelf boards as well.

Now that the bookcase was pulled apart, I could begin reworking and shaping these boards for my needs. The original shelves were 1″ x 12” x 32” which was too deep for our books and would require much larger shelf braces to support them than I wanted to use.  So, I ripped each board down to 7 ¾”. This was an arbitrary depth that I picked because it cut out some bad spots and the original screw holes in the sides of the shelves. Plus, most of the books fit without hanging over the edge.

After ripping the shelves down, it was time to round the edges off. (Note: unless you’re 3 feet tall and still a little awkward on your feet, this is not a necessary step.)  I used a 1-1/2” PVC coupling as my rounding edge. (I know – this is very technical.  I would have used a mason jar but could not find one.) This gave me about a ¾” cut away. For those who want to do it a little more professionally, I recommend a router and circle cutting guide. For all others, there’s the band saw, jig saw, coping saw, utility knife…

After rounding the edges up, I used a ¼” round over router bit to take the top edge off all the way around the shelf. This step does not have to occur on the back side since, unless your 3-foot-tall shelf-user is really trying, he cannot hit his head on the edge that butts up to the wall.

After the rounding was over I gave the shelf a light sanding to remove any previous marks and to get a more uniform look across each board. (A little side note here: We did not paint these but left them bare pine because the bed is pine with a clear coat finish – see Item Number 1 in my personal attributes list noted above.)

After the boards were finished, we attached the shelf braces. These we bought at Lowe’s, although you could in fact make them yourself if you wanted – even from more of the reclaimed wood. The ones we bought were pre-shaped and had a recessed hanger in the back to receive a screw. I attached the braces six inches from each end and countersunk two screws in each brace. Nails would have been fine and perhaps a little easier, but the screws will take a little more of a beating before they pull out.

Finally, I attached the braces to the wall using #6 x 1” screws and drywall anchors and made sure to level the shelves before I drilled for the anchors. As you can see from the picture, we staggered them in one corner for a pretty cool effect, which also saved money on book ends. Oh, and the leaf is from IKEA if you’re interested. It really makes a pretty cool nook, and Noah loves lying on the bean bag with me to read stories before bed.

I know that to some this was hardly using reclaimed wood, but since it only took me about an hour and half to make all these shelves and hang them and only cost me 8 bucks per shelf. I’m pretty content with the reuse of lumber on this project.