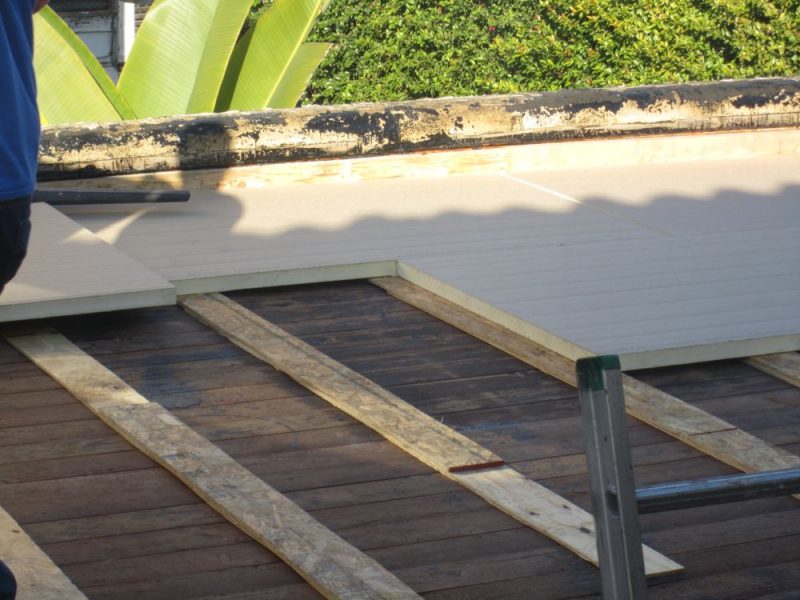 Like most Southern Californians, we use our garage for just about everything EXCEPT storing a car. It’s a luxury not all parts of the country have, but it affords Californians with some square footage that might normally be a basement in other parts of the country. In our case the garage is a HomeFixated proving ground, workshop and all-around man-cave (you do need to ignore the washer and dryer, which completely mess with the man-cave feng shui). Our garage has a flat and dark-colored roof, and in the summer it turns into an oven that will literally broil you if dare set foot inside it mid-day. When we recently needed to reroof the garage, I decided to capitalize on the opportunity and install some rigid foam board insulation as well.

While rigid foam insulation board isn’t the most impressive form of insulation on the market, I didn’t have a lot of options to work with given our garage design. I could have used spray foam or even batts of insulation from the inside, but our open ceiling and exposed joists are filled with banks of fluorescent lights and various items stored in the cavities between the joists. That left us with insulating from the top, and given our flat roof and torch-down roofing material, rigid foam insulation seemed the most practical. While the rigid insulation added to the cost of our roofing contract, our roofer (Sequoia Roofing in San Diego) didn’t rake us over the coals. The insulation project was yet another “while we’re at it” event that regularly keeps us dumping more money than expected into just about every house project that comes up. Ah, sweet homeownership! Before we dive into the details, keep in mind best practices and building code vary widely, and what worked in our case may not be ideal or up to code in your neck of the woods.

Demolition
Before the roofing and insulating project could get underway, our old roof needed to be demo’d. If you are ever having a flat roof redone like ours, make sure you cover everything you care about in the garage. Definitely remove your car entirely if you actually park yours in the garage. If you don’t cover things up, you’ll find all your possessions covered with a thick layer of soot and grime that will take you months to clean. I thought about tacking plastic sheeting directly to the ceiling joists, but our roofer said when people do that, the weight of the dirt inevitably pulls all the sheeting down along with the dirt. Luckily our roofer was conscientious and laid plastic sheeting over everything in the garage. With that done, the old layer of torch-down roofing and underlayment was ripped up and disposed of. 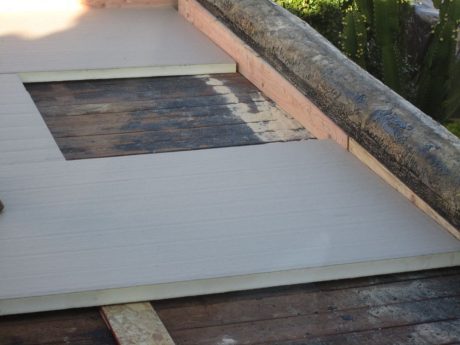 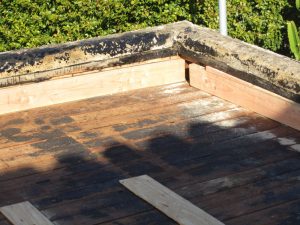 The rigid foam board insulation we used was 2″ thick and came in 4′ x 8′ sheets. Once the roof demo was complete and the flat roof was cleared of any remaining debris, some rotted 2x material around the perimeter of the roof was replaced. The 1x roofing boards (which also made up the “ceiling” of the garage) had nice gaps that you could see the ceiling joists through. The joists were marked around the perimeter to make finding them much easier later. The 4’x8′ sheets of rigid foam board insulation were then laid out in a staggered pattern across the entire surface of the flat roof. Some parts of the country necessitate a vapor barrier under the rigid insulation, however this wasn’t necessary in our case.

Adding the Roof Sheathing
Sheets of 4’x8′ OSB were then laid directly on top of the rigid foam insulation boards, leaving small gaps per the manufacturer’s recommendation to avoid buckling at the seams. Using the perimeter marks for the ceiling joists, chalk lines were snapped to indicate where to screw down the sheathing. Square shaped “washers” were then laid out on the chalk lines. These distributed the pressure of the screw-head to a larger area and also recessed the head so it wouldn’t protrude into the roofing layers to be added above. Long enough screws were used so that the screws would go through the sheathing, insulation, 1x boards and securely into the joists below. 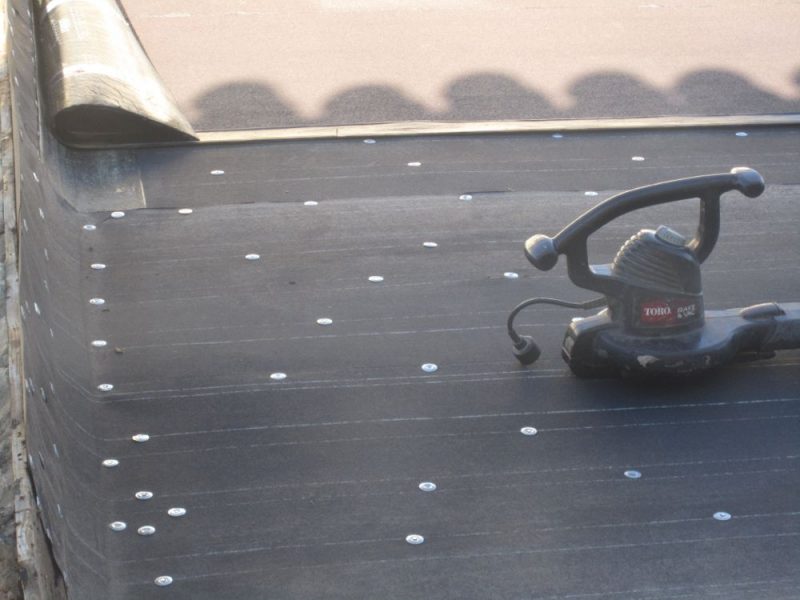 Once a nice smooth surface of sheathing was in place on the flat roof insulation, a layer of 28# fiberglass base sheet was nailed in place with large head roofing nails. A single-ply granulated modified bitumen roofing material was then torched-down as the final layer of roofing material.

The end result is a man-cave that feels more like a temperate cave and less like a broiler. Although the R-value isn’t huge, the rigid foam insulation boards do a nice job of keeping the searing heat of the roof from making its way into the sanctified space of the man-cave. Between the flat roof insulation and our install of Reach radiant barrier insulation on our garage door, the shop is now downright comfortable, even in the warmer months. We expect the flat roof insulation project to help retain heat in the winter as well. Of course “winter” here in San Diego isn’t going to do much to tax the insulation. 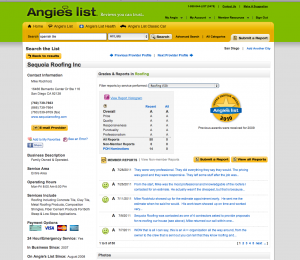 Our thanks to Sequoia Roofing, who did meticulous work on both our garage roof and on a portion of tile roof we needed replaced. It’s worth noting that I found Mike and Sequoia Roofing after careful research on Angie’s List.

As you can see from the screenshot I took before hiring, some companies reputations really shine in a review system such as Angie’s List.