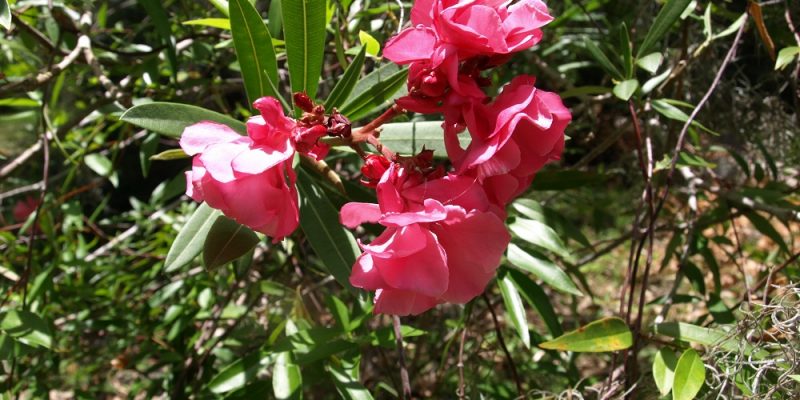 While boxwood can indeed be pruned into intriguing topiary shapes, it generally lacks a certain element of aesthetic appeal because who really has that kind of time? Instead, you can easily get a lot more eye candy for your money by purchasing shrubs for your yard that produce tons of flowers and also function as a hedge. Available flower colors range from lurid pinks and rich blues to shades that are far more muted. So, without further ado, I give you the flowering shrubs of the garden variety!

No matter where I’ve gone in the South, azaleas seem to be the flowering shrub of choice. I’ll admit they are beautiful in bloom but otherwise these ubiquitous plants look like any other hedge. Most quickly get to the point that they’re large scraggly, monstrosities. This is perhaps because people generally don’t seem to see the point in keeping them trimmed into neat shapes. Then again, I just don’t see the point of azaleas. They’re too much work for what you get.

In fact, the ones in front of my apartment ended up being the local bug hang-out. Investigation proved that this innocuous looking shrub was where the whiteflies plotted to kill my lemon verbena and the slugs hid out after a long night of ravaging tender herbs. A local gang of spider mites eventually made this joint their local hang out too, leading the neighborhood to go even further downhill from there. A daring raid by the local bug spray squad did nothing to stop these dastardly criminals who continued their reign of terror on my peaceful suburbia. Or something like that. As a result, I strongly advise people to think twice before planting them but I imagine most of us are already stuck with these bug condominiums. If so, you have my sympathy. Moving on.

Oleanders are also a popular low maintenance choice in my zone (8b). These specimens are commonly planted in public access areas on roadways and near the boardwalks at the beach. I assume they’re not being heavily maintained in either place yet they still flower every year. However, these plants are incredibly poisonous to both hungry pets and mouthy, small children. I was doing some investigative research at Home Depot for new specimens for my yard only to discover that these shrubs now come with a warning label stating precisely that. So, if you value your pets or your kids, the oleanders are probably best avoided. Otherwise, they’re a nice but deadly touch.

My female relatives all love these shrubs, yet I seem to be among the few hydrangea haters out there. It’s easy enough to do when the smelly plants happen to be one of the many strange allergies that I seem to possess. It’s nonetheless true that hydrangeas provide gardeners with fat bouquets of flowers in the spring but even those that like them wonder if they’re worth all the trouble. After all, we can’t simply plant the shrubs and leave well enough alone. We have to change the color of their flowers as well.

Rather like fairies in Disney’s Sleeping Beauty, gardeners with hydrangeas remain divided over the incredibly serious subject of blue versus pink. It’s naturally a matter of personal choice but one that can be problematic when the soil you have won’t give you what you want. I personally can never keep straight which soil type is needed for either color blooms so I looked it up. Thanks to this Illinois State Extension article, I can now state with reasonable confidence that alkaline soils produce pink flowers and acidic soils will produce blue flowers. Make your battle plan accordingly but don’t be surprised if the white hydrangeas stay white no matter what you do. Like Katy Perry, they were just born that way.

If I removed the lawn eating, flowering shrubs that I already have and added new ones, I would likely invest in some rosemary bushes. That way anyone overcome with the intense desire to chew on the scenery like a squirrel certainly wouldn’t need to worry about being poisoned. In fact, any branches that had to be trimmed off could be used for culinary purposes and I’m all about some good food. The trouble is that rosemary bushes aren’t a good choice for poorly drained soils like my former yard. Then again, there’s always the beautiful camellias or the sweet-smelling gardenias that I could add to the garden instead if things don’t work out.