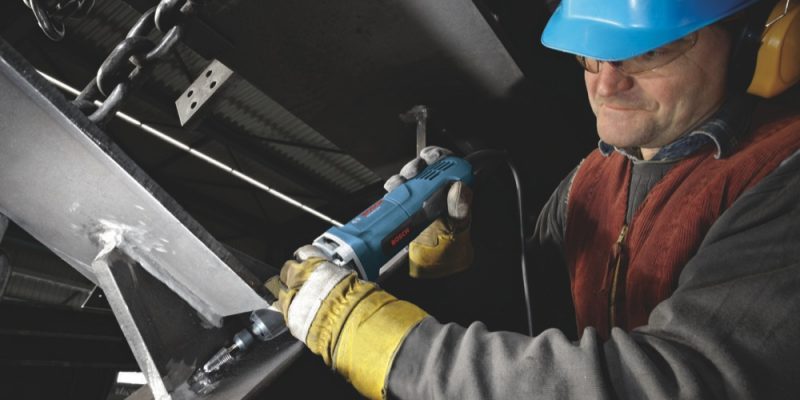 The Die Grinder. So simple, so elegant, so effective! When you are doing metalwork, there is just nothing else that is as versatile when it comes to getting into those difficult, tight areas. A long-time cheap and effective staple pneumatic tool for machine shops, it’s basically the grand daddy of the Dremel and all the electric rotary tools to follow. However, the air die grinder always had one major downside. It makes an ungodly noise! Not only does it howl like a cross between a dentist drill and a freight train, you have to listen to the air compressor kick on regularly. Enter the corded Bosch electric die grinder.

Here’s a quick overview from Bosch. . . note that he’s saying “SHIP building” around the 10 second mark.

The teutonic tool gods at Bosch have a great line-up of corded and cordless electric die grinders that just beat the heck out of a pneumatic air grinder when it comes to reduced noise levels. The latest in their lineup is a bare-bones paddle switch model that works almost identically to an air grinder. So what did they name it? The PowerGrinder Max? The Mondo Grindinator? Nope, not the German engineers over at Bosch. The new offering is the romantically named the DG300LPD. Catchy, right?


Let’s be serious here. This is a single purpose tool… probably not one for the weekend warrior or the hobby crafter. It is a motor in a handle. It spins in one direction, at one speed. There is no variable speed adjustment, no soft start, no quick-change collet. As I said, this a straight up electric alternative to the traditional pneumatic die grinder. So who needs this tool?

Pro welders and weekend metal workers need it. Anyone who likes to work on cars, but doesn’t own a shop-sized air compressor would love this. Wood carvers, especially people who make wooden signs or chainsaw carvings would TOTALLY dig this. For such a single-minded tool, it really is versatile. It’s all about the attachments that you fit it with. Sanding drums, grinding tips, cutting wheels – it really is like a great big Dremel on steroids. Bottom line…if you burn up a lot of smaller rotary tools or they just don’t pack enough punch, it may be time to step up to a die grinder.

The DG300LDP features a paddle on/off switch and ¼” collet, and it comes with a 19mm Wrench and a 13mm Wrench to tighten and loosen the collet. It runs at an impressive 30,000 RPM with no load. It has an extended neck to get into hard to reach places and a 4.8 amp motor with Bosch’s “Service Minder™ carbon brushes for long life and efficiency.

It’s hard to rave about a tool that is so utilitarian, in a world of flashy new gizmos. But this is an undeniably well designed tool, offered at a good price. Does it sound good, but you would like to have the versatility of variable speed? Then the super-sexy Bosch DG355LCE might be more your speed, Sport (available via the second link below for around $250 from our sponsor Ohio Power Tool)! As for me, I like the DG300LPD. It grinds steel when I need to grind steel, and it doesn’t make my dog howl when I turn it on. Everybody’s happy! Available for around $230 via first Amazon link below.