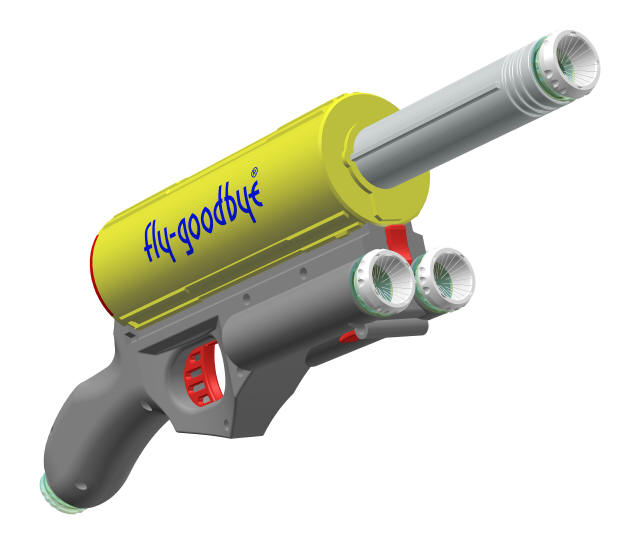 It’s spring and fly hunting season is just around the corner. Why not get in touch with your inner Buddha and start shooting some bugs! By “shooting”, we actually mean vacuuming them up with the Swiss-invented Fly-Googbye. This isn’t your ordinary flyswatter, and it’s 100 times more fun to use. For those times when you don’t want to gear up and hunt for wildlife in the great outdoors, just grab your Fly-Goodbye and starting hunting right inside your home. You might consider closing your blinds first though, or your neighbors may think you’ve finally gone completely off the deep end as they watch you stalking around windows, gun in hand. Once unwelcome flies now become an excuse to grab your gun and go hunting (just make sure it’s the Fly-Goodbye and not your 9mm).

My first attempt at catching flies failed. I found a fly and ran around my house like a crazed but poorly trained fly-hunter. I tried shooting him about twelve times before the fly made its escape. Demoralized, I then resorted to stalking ants and gnats which I successfully nabbed on the first try. It turns out the capture tube on the Fly-Goodbye isn’t really designed for ants or gnats, they just crawl or fly right out. Is it me, or are there a million more gnats the last year or so? Maybe it’s a local thing.

Anyway, it turns out that once a fly goes into stealth mode, it’s pretty hard to find in a two story house. I went to sleep haunted by flys taunting me with their superior reflexes. The next morning I was opening the blinds when I discovered my prey’s hiding spot. . . a window sill. I lept out of the room and raced to get my bug gun (again the Fly-Goodbye, not a 9mm). I was cautiously optimistic that after a night of captivity my fly might be a little less nimble. Sure enough, on my fourth attempt I captured him! I think I timed it before his morning Starbucks run. Luckily, with practice, my fly hunting skills improved. 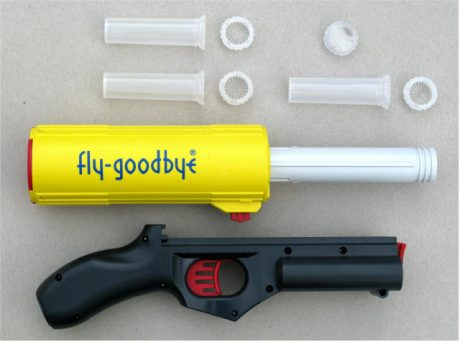 As much as I hate flies, I have to admit it was a good feeling setting the fly free outside. Aside from whatever good Karma you gain through such benevolent, non-violent insect control, you also don’t need to clean the bug guts off your freshly painted wall. If you really feel a hatred towards flies, just focus on the knowledge that the fly you set free will likely become a meal for another critter in the wild.

Fly Hunting Tips
Unlike shooting a duck with a shotgun, or a large animal with a sniper rifle, fly hunting is a true sport. It requires great stealth, a steady hand and nerves of steel (you never know when that fly might turn on you and mount an aerial assault). You’ll want to approach slowly, angle slightly down at the fly. Don’t wiggle the gun as you squeeze the trigger. It’s almost like shooting a real gun, squeeze that trigger gently, don’t pull it or yank it. Perhaps most importantly, you’ll need to get a sense of the ideal striking distance. If you get too close you’ll scare the fly away. Too far, and the suction won’t be adequate to vacuum that bug into the chamber.

Unconventional Prey
Even though the Fly-Goodbye is clearly geared toward fly capture, we actually found it ideally suited for spiders and other less nimble critters. In fact, I am called upon to capture far more spiders with this thing than I am flies. Notice I said “called upon.” Once you have a reputation as an armed and dangerous insect hunter, you will be called upon to put your (non)lethal skills to work. While you could use it to catch bees or wasps, I think you’re pretty much begging to get stung during the release process if you do. The manufacturer also urges caution and discretion in this quote from Fly-Goodbye.com:

WARNING: If the insect you are hunting is bigger than the capture tube (barrel), leave everything and run for your life.

Is there anything we don’t like about it? I think there’s room for improvement on the suction. If the Fly-Goodbye had a little more suction power it would surely increase people’s success rate with it. Of course, that would also make the fly hunt slightly less sporty, but I’m OK with that. The little lids to the insect tubes could also use a slightly more robust locking. It’s easy to over-tighten them and unlatch them in the process. I’d also like to see the cocking mechanism improved. Something more along the lines of this Terminator scene. 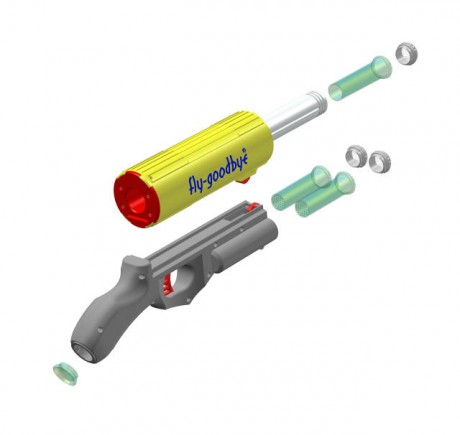 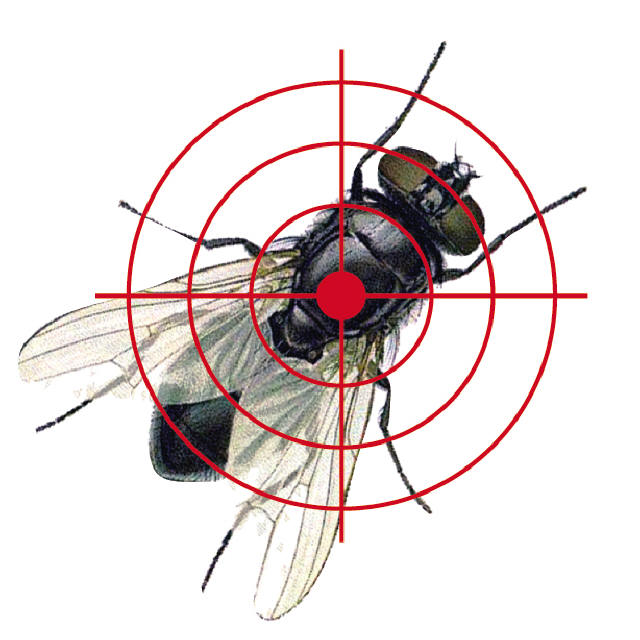 Since guns don’t preserve life quite as often as we’d like, we think the Fly Goodbye is a happy contribution to global Karma. Although it’s manufactured in the EU, ThinkGeek.com has the Fly-Goodbye listed for $29.99. Or, you can see the current list of Fly-Goodbye Resellers (international as well), here. Happy hunting!