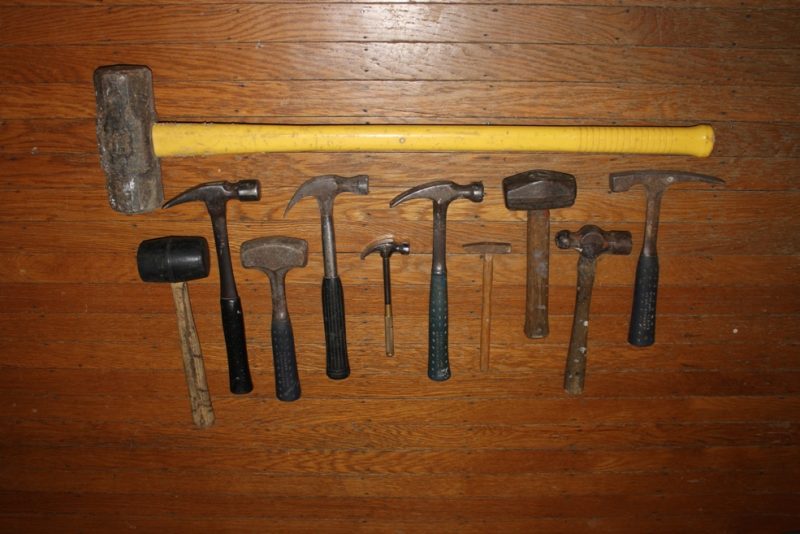 Many millennia ago, the first prehistoric DIY caveman got a flash of inspiration, picked up a rock, and brought it crashing down on something. In the process, he probably also crushed his thumb, which was likely responsible for the first prehistoric string of obscenities (“Son of a stinking pterodactyl-breath Neanderthal, that HURTS!!). Ever since then, striking tools, in the form of hammers, have played a major role in shaping our world. And not just by flattening our thumbs; although the hammer is generally thought of as “just a tool,” its inherent danger and destructive potential, as illustrated in the following video, shouldn’t be ignored…

I got my start many years ago as a framing carpenter. The most important purchases I made after receiving my first paycheck were an unbreakable thermos (Buffalo winters are COLD!), a good tool belt, and an Estwing 24-oz framing hammer. The Thermos fell victim to a front-end loader (“unbreakable” has its limits, apparently), and the tool belt wore out after several years, but the Estwing is still banging away.

There are a lot of different types of hammers out there, encompassing pretty much any specialty you can think of—roofing, drywall , masonry and rock work, engineers, hobbyists and upholsterers, metalworking—they even have cute pink girly hammers . If you work in a trade that requires a specific type of hammer, you’ve probably learned what the right tool is for you. If you’re an all-around DIYer, though, you’ll be looking for tools that help you accomplish the tasks you’re most likely to take on—a bit of demolition man (or woman—with or WITHOUT the pink hammer!) and a megadose of Bobby (or Bobbie!) the Builder. With a hammer from each, or even most, of the four categories below, you should be able to do a bang-up job on any DIY or remodeling project.

May the Force be With You…The BFH

We’ll start out right at the top of the food chain. When it’s time to smash the hell out of something, whether it be an old sidewalk, a stud wall that has to go away, or your ex’s abandoned collection of “It’s a small world after all” singing dolls, nothing beats the long-handled sledge. The long-handled sledge is known in construction parlance as the “BFH” or “Big Freakin’ Hammer” (definitions may vary slightly). You may also hear it referred to as The Persuader, for its ability to persuade pretty much anything to move/disintegrate/become flat. Another somewhat less-common use of the BFH can be seen in this rather novel demonstration of sledgehammer technique (HomeFixated lawyers insist that we state, “Don’t try this at home, or anywhere else.”) –

And this one, the sledgehammer workout—who knew a hammer could be so versatile and fun!

With a 36″ handle, usually hickory or fiberglass, you get a lot of leverage to wallop whatever is the object of your ire. Available in weights from around 5 pounds up to about 24 or more, a good all-around basher is the 16-pounder. I’ve had mine for several years, and haven’t come across much that it couldn’t persuade. Available at Amazon or any home center for around $30-45. We also like the Wilton BASH

(with BASH standing for Bad Ass Sledge Hammer), which offers a serious durability thanks to its “unbreakable” handle.

Next up (or down) in your hammer repertoire should be the short-handled sledge. There will be a lot of times when the long-handled sledge packs just a bit too much punch for the job at hand. It’s also pretty heavy and can be a little tough to control, especially in a tight space. Don’t believe me? . (HomeFixated lawyers insisted I delete that suggestion). A decent size small sledge is the three-pounder. It has plenty of weight to propel a cold chisel through a brick, or to bang that header into place. It works pretty well for crushing your empty beverage cans at the end of the day, too, to save space in the recycling bin. You can find a decent one at any home center, or of course at Amazon, for $10-20.

Not Just For Whack-A-Mole…

From time to time, you’ll have something that needs persuading in a somewhat gentler fashion. If you’re working on your car, and need to tap a bearing race into place, assembling a balky piece of furniture, or setting pavers for a patio, you need something that provides the necessary oomph, but with a bit of give. A steel hammer head can mar the surface when it makes contact, and may also make that contact with a bit more force than you want. A good rubber mallet will provide much more control over how your persuasion is administered, and will generally leave no evidence behind, in the form of chipped edges, cracked pavers, or dented cradle parts. Available from the usual suspects, including Amazon, for under $10.

Let Me Frame It This Way

Last in our hard-hitting roundup, the tool most likely to get used on every project—the framing, or carpenter’s, hammer. Talk to ten framing carpenters, and you’re unlikely to find two with the same hammer. Framing hammers come in a multitude of styles and sizes, from a multitude of makers, and there are a lot of good ones out there.

When I first began nailing together stud walls, swinging my shiny new Craftsman 16-oz hammer, and missing the nail about a third of the time, my foreman Ross’s good-natured refrain of “Hit it!” would come wafting across the job site. That was quite a while back, and a lot has changed since then. For the past three-plus decades, my Estwing 24-oz framing hammer (which replaced the Craftsman after the first week, mainly because I wanted a hammer with more banging power) has been getting the job done, and my accuracy has improved—I now miss the nail only about 25% of the time. The Estwing has a solid handle and a rubber grip, and the 24-oz weight of the head can put away a 16p nail in two or three strokes (assuming I actually HIT IT!). The straight claw has survived over thirty years of prying, nail pulling, ice chipping, and general abuse, and is still good to go.

Hammers are available with several types of handle: solid metal, hollow metal, wood, graphite, fiberglass, even titanium. I like the heft and feel of the solid metal, but it does transfer a lot of vibration to the user; also, the weight of the hammer can be fatiguing after a long day of banging. Some newer hammers, such as the $200 Stiletto TB15MC TiBone 15-Ounce Titanium Milled-Face Hammer  or the $39 Dewalt DWHT51138 15 Ounce MIG Weld Checker Faced Framing Hammer,  claim to provide the same striking force as a 28-ounce hammer, with only a 15-ounce head. That could save a lot of wear and tear on the old arm. Unless you’re a pro, or have a lot of disposable income, the Dewalt would likely do just fine. It has the straight claw; some users prefer a curved claw for pulling nails, but I’ve never had a problem using a straight claw, and it’s way better for prying things apart.

Your best bet is to go to a home improvement or hardware store with a good assortment of hammers, and try several out. Grab the handle near the end, like you’re shaking hands with it, and find one you like the heft of, one that feels good in your hand, with a weight you’d feel comfortable swinging for a few hours (although they may get touchy if you test that out in the store). Buy the best quality you can afford, and your hammer will take a pounding for decades to come.

Finally, before you go thumping away, here are a couple of other points I want to hammer home…
If you want your hammer to be a work of art, AND to have a cool name, you could do worse than the Hardcore Hades, available along with a line of other similarly stylin’ hammers and axes, from Basecampx for $115 Canadian. It has a 19-oz head and an 18” Tennessee hickory handle. (Note: they are currently sold out of this model.)

If you’re interested in all things hammer, check out the Hammer Museum in Haines, Alaska. There you’ll find fascinating info on the history of the mighty implement, and an online store where you can purchase your own “I got hammered in Haines, Alaska” T-shirt. A lot of interesting pictures are online, too, including several hammer sculptures, and five old hammers from the “how not to hit your fingers” lineup.

Next up, my wise friend Deb urged me to include a hammer that might just save your life. Most vehicles in use today have power windows. There is a good chance that the window could become inoperable in the event of a crash, fire, or submersion in water, trapping the occupants inside. Auto safety glass is tough to break, especially in an emergency situation; ResQMe has come up with a hammer with a pointed, hardened striking surface, that will shatter the glass and let you escape. It also has a built-in seat belt cutter, in case the belt becomes jammed. The Life Hammer, along with more information, including a video, are available from (where else!) Amazon for about $15. Hey, my Mom even got one for me!
And finally, if you aspire to hammer greatness, prepare to be inspired by this happy, hammerin’ guy (and this version even has subtitles!) Enjoy!