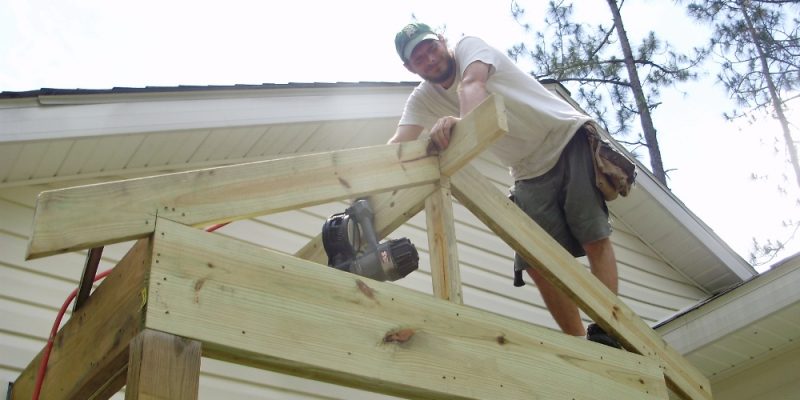 Framing. It’s the interior skeleton that holds most structures together. But it’s more than just a few sticks of wood and nails. If it’s not done correctly, it’s going to be more like a house of cards that’s ready to topple over at any minute. Kevin Spacey might approve, but your building inspector won’t. Whether you’re framing an interior wall or an entire house, consider these seven key framing tips and layout tricks prevent your next framing project from looking like an old shanty that’s ready to fall to pieces.

On Center or Off Center?

When you’re pulling a measurement across the face of your top and bottom plate for a stud layout, typically the layout is 16” on center, right? But more often than not, when the measurements get pulled, the person doing the layout makes their marks on each 16” increment. The problem with that is that now the layout is off center. If you attach a piece of plywood, sheetrock or other panel goods to the studs, it’s going to be off where the stud breaks with the edge of the board. To ensure your layout is correct, you’ll need to set the layout ¾” behind the actual 16” increment. This pushes the studs over just enough so the next piece of plywood, sheetrock, etc. breaks perfectly on a stud.

This mistake happens quite often when you’ve got multiple walls to frame up. The bottom plates or top plates get cut to the wrong length and you end up having to buy more materials because you just wasted everything. The best way to ensure top and bottom plates remain consistent when they are cut is to layout everything on the ground first. Snapping chalk lines is just the start. Add header measurements, door openings and angles to the floor layout. This way you can place the top and bottom plates against the floor layout to make sure you have accurate cuts every time.


While interior walls usually don’t do much but look pretty, bearing walls hold all of the weight of the roof. And more often than not, the layout under these extra important walls gets off somehow. One of the easiest ways to keep a good layout is to just copy the truss/joists/rafters from up above. Wherever a rafter bears onto a wall, you’ll need a stud directly underneath. Where hips, girders and other heavy duty trusses land, you’ll need to double or even triple up the studs to accept the load. Check with your local inspector or building code for specific requirements.

Top and bottom plates often have seams where two boards join together. And no matter how many nails you put into it, it’s going to be the weakest point in the wall. So how do you prevent these weak spots without buying a 30’ long 2×4? You simply stagger the seams. Be sure that you keep the top plate seam as far away from the bottom plate seam as possible to prevent weak spots in your wall framing. 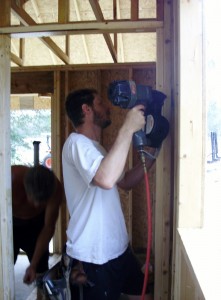 Let’s say you’re building a house that’s rectangular in shape. Two of those walls are going to be long and two of them are going to be sandwiched between the other two walls. But when you’re covering those walls with a plywood exterior, the layout needs to be adjusted to accommodate the extra 3 ½” that each wall adds – otherwise you’ll end up with a small 3 ½” rip on each side and the wall won’t be as structurally sound as it should be. Hang your tape over the edge of plates 3 ½” to get the right 16” on center layout.

Have you ever wondered what those little black diamonds are on your tape measure? Those are snow load layouts. They bring the conventional 24” rafter layout closer together for a stronger roof. By bringing the rafters closer together at 19 3/16” increments, you increase the strength of the roof enough to prevent snow from crashing through your roof, just like that insurance commercial guy “Mayhem”.

While this isn’t exactly framing-related, it’s still worth mentioning. Some layouts don’t get hidden by drywall or plywood. For instance, spindles on a porch railing are visible forever. Since they need to be a maximum of four inches apart in most locales, it tends to make the layout look wonky once it fits between the support posts if the measurement isn’t an even number. And when measurements between support posts aren’t consistent, it can really make your layout look like a kid did the job. An instant cure for this dilemma is to start your layout from the center and layout the spindles towards each support post. This way, no matter what the measurement, you can be sure the layout looks smooth and consistent all the way around the porch. You’ll still want to verify where the spindles at the edge will wind up, since sometimes this approach can land a spindle too close to the end. If that’s the case, an offset, or narrowing the gaps slightly might be needed.

Any framing tips we missed? If so, please chime in via the comments below!