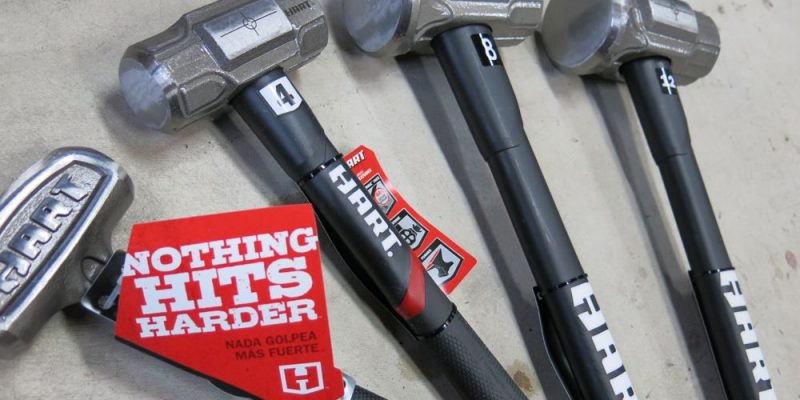 Ever said to yourself, “Boy, I sure do love my sledgehammer!” No? That makes two of us. One thing that keeps most people from getting too fond of their sledgehammers is that generally, when you reach for it, it’s because there’s a miserable job to do. Busting up concrete, pounding in fence posts, etc. If it was easy, you wouldn’t need the sledge. Every once in a while, though, you just gotta smack the crap out of something. Sometimes, it can even be a good tension reducer. Later on, we’ll give you some potentially more enjoyable ways to employ YOUR Hart sledge, or whatever brand you use!

Admittedly, it’s kind of hard to get excited about a sledgehammer. They haven’t changed much over the past several decades; the last big innovation was switching from wooden to fiberglass handles. That’s saved a lot of splintered handles over the years, but it hardly qualifies as sexy. Exciting or not, however, the sledgehammer is one of the tools that pretty much everyone needs. The folks at Hart Tools, who started out making innovative framing hammers around 25 years ago, have joined the fray with their new line of Hart sledgehammers. They recently provided several sample sledges in varying weights for us to evaluate. Being exceedingly strong and manly, naturally I focused on the 12-pounder. The fact that I have a concrete driveway and a barn floor to break up may have been minor factors in the decision, too. Here’s a quick video of a 12-pound Hart sledge being introduced to a concrete pillar:

The HART Sledgehammer line has some features beyond the 34” fiberglass handle to set it apart, including a forged head, a PowerStrike face (you have to say that in a deep, booming, Monster Truck commercial voice), a SureGrip overmold for improved grip and comfort, and a tool hanger for easy storage. The tool hanger and overmold are handy features; it’s nice to be able to hang the thing up on a wall in the garage, instead of having it leaning up (and falling down). The SureGrip overmold is comfortable to hold, and provides much better grip than a standard bare fiberglass handle does. I imagine it’s even better in hot weather, when your hands are all sweaty; I tried it out in January, and with the wind chill well below zero, I wasn’t sweating much.

The most innovative feature on the Hart sledge line is the PowerStrike face.  The PowerStrike feature is a raised cross on the face; Hart claims this design results in a 44% more efficient impact; that could save you a lot of lifting and swinging. The other end of the head is larger, and very smooth. They also built in a Side Strike feature, to help sink nails in tight spaces. The Side Strike is a raised flat area on the side of the head, to help you whack in nails in tight areas. It even has a bulls-eye on it, so you could have side-striking competitions, if you were so inclined…

The Hart Sledgehammer Meets The Driveway

Hart’s slogan is “Nothing hits harder.” To put the Hart sledge to the test, I braved the wild and wooly January outdoors, and dragged out the Hart 12-pounder (which, according to my highly-accurate postal scale, actually weighs 14 lbs. 14 oz.). To add some excitement and competitive spirit, I also schlepped out my trusty old no-name yellow-handled 15-pounder (actual weight: 17 lbs. 5 oz.). We’ll be replacing our old cracked, heaved driveway in the spring, and what’s left of it will need to be broken up and carted off. It promises to be great fun; if you’d like the opportunity for some free exercise, send your name and phone number, along with the brand and dosage of your meds, and I’ll call you when the dumpster arrives. Meanwhile, I decided to try out the two sledges on some chunks of genuine frozen concrete, to see if I could tell any difference in how the two pulverized the stuff.

I picked a spot near the far end of the driveway, beyond where we usually park, to preserve marital harmony. Before I started swinging, I donned a pair of safety glasses; I’m allergic to concrete shards in my eyes. I started with the old yellow sledge, and whacked the slab four times. This caused pretty good fracturing, and pulverized the primary smack zone.

I then switched to the Hart sledge, and bashed a spot on the far side of the driveway four times. This caused roughly the same amount of fracturing and minor pulverization, but it didn’t really wow me. At least not until I dug down and levered the broken pieces out. It turns out the concrete on the first side was about 2” thick. The concrete on the Hart-hit side, however, was 4 ½” thick. Aside from being an indication of the quality of the driveway installation 50 or so years ago, it sort of gave an edge to the bigger sledge. To compare apples to apples, I grabbed old yeller again, and whacked some of the thicker concrete. It took six smacks to fracture the concrete to the same degree the Hart sledge did. At this point, I concluded the test and retreated indoors, where it was significantly warmer than the 0° temp outside.

The verdict? Despite being almost 2-½ pounds lighter, the Hart sledge more than held its own against the heavier hammer, requiring fewer hits to wreak a similar amount of devastation. You might not think that 2-½ pounds, and a couple fewer hits, makes that much difference, but if you’re lifting that hammer over your head and swinging it for a few hours, like we’ll be doing when we demo the rest of the driveway, those pounds and hits will add up. We’ll be using both hammers on the job, but I have dibs on the Hart.

Bustin’ concrete isn’t the only thing sledgehammers are good for. Another job I imagine the Hart sledge, like most big sledges, would excel at would be “persuading” walls/joists/headers etc. to relocate where you want them. In fact, I’ve always referred to the big sledge as The Persuader; it’s also affectionately known as the BFH, which stands, roughly, for Big Freakin’ Hammer. The larger, smooth face has plenty of surface area to nudge even the most obstinate building materials into compliance.

So now the workday is over; there’s no concrete left to smash, the fence posts are all in, and all of the headers have been persuaded into position. You’re still full of energy and eager to get some more use out of your BFH, though, right? Try some of these fun sledge hammer activities (at your own risk):

7) Doing the sledgehammer workout – see YouTube for about 26,000 videos

5) Intimidating unruly kittens (note: this use may not be endorsed by PETA)

2) Putting your Miley Cyrus babbling bobblehead doll – or ANY obnoxious, noisy, unwanted, re-gifted piece of crap you got for Christmas—out of its misery

Should You Have A Hart?

My philosophy on buying tools is to get the best quality you can afford. Good tools generally do a better job of whatever it is they’re designed to do. They’ll likely last longer, and they’re more enjoyable to use because they’re better designed: less vibration, a better fit in the hand, easier to change out parts, or whatever. I want a sledgehammer I can pass on to my grandson (who’s just barely heavier than the Hart sledge, at this writing), and I think the Hart 12-pounder will be up to the challenge. HART backs its innovative products with a limited lifetime warranty. The 12 pound Hart sledge is available from Home Depot for $50. If you don’t want to be such a heavy hitter, they also carry the 4-pounder for $26, and the 8-pounder for $40. What’s your favorite non-traditional use for YOUR sledge? 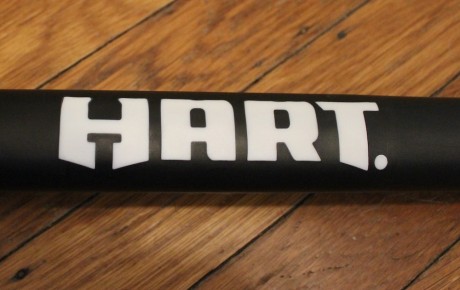