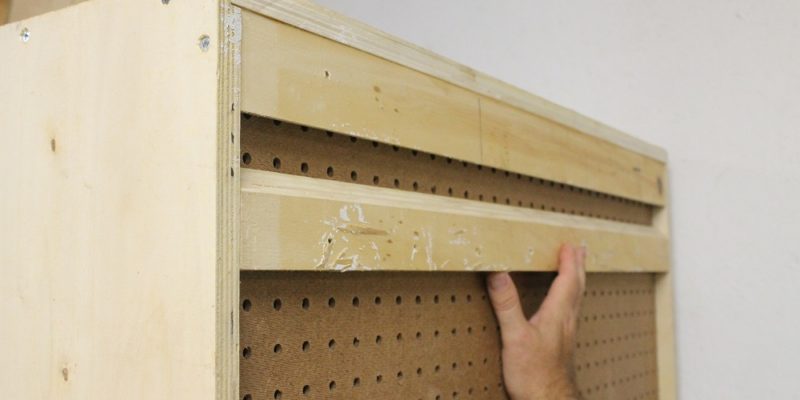 If you caught our wooden bookshelf project, you may remember my saying it would be hung on the wall. But how exactly would you mount that sort of thing? The answer – in many cases – is a pair of wooden wedges known as the French cleat. We’ll show you how to use this easy technique to handle some of your trickiest wall hanging challenges. From kitchen cabinets to large pieces of art, French cleats are the simple, reliable solution you’ve been looking for.

Ahh, the French! They’ve given us so many wonderful things: like French fries! Oh wait; that was Belgium. French braids, then. Uh-uh, that was Africa. French bulldogs? Nope, England. French curves, French kisses, that red salad dressing? No, non and not a chance! What about the French horn and French manicures? Germany and the good old U.S.A.! Fine, but surely they gave us French toast, right? Pshaw… egged bread was around long before France even existed.

Heck, my surname is “French” and I’m pretty sure the closest tie to France I have is that time my mom visited the cathedral Notre-Dame de Paris. But cheer up, mesdames et messieurs; they actually can claim French bread (only they call it “baguette”) and French doors! And, it seems, even French cleats! So… Oui!

But we’re here to discuss French cleats, a fixture hanging method allegedly thought up by old-time French ship builders. And until someone shows it, too, to be a misnomer, we’ll tip our beret and let them have this one.

Two of the most common ways of mounting large and/or heavy things to a wall are French cleats and “Z-clips”. French cleats are usually a pair of beveled wooden cleats. And Z-clips are essentially their metal “Z” shaped counterparts. You can purchase pre-made metal cleat brackets. But given how easy it is to cut your own out of wood, I’ve never gone that route.

Now that you know what French cleats are, let’s back up a bit and have a look at where we left off on the purple DIY bookshelf project.

Make Room For The Cleat

If you intend to use a French cleat hanging system, plan your project accordingly. You will need room to mount the cleats on the back. Use decent quality plywood (with the face grain running lengthwise) for your French cleats. Solid wood can split; and that would be bad.

To hang the bookshelf – and pretty much anything else with a French cleat– you want to also add a spacer cleat near the bottom of the unit. We’ll start there.

The spacer cleat serves three purposes. The first is that it keeps the unit parallel to the wall, preventing destructive prying forces on the French cleat above. Therefor, the spacer should usually be the same thickness as the French cleat. Secondly – and equally as (or even more) important – the spacer helps support the weight of the unit being hung; especially in the case of cabinetry and shelving. Finally, when screwed to the wall, it ensures that no one (kids, a careless housekeeper, etc…) can accidentally lift or knock the unit off of the French cleat.

In some cases (hanging artwork, for example) the spacer might not offer weight support because you can’t screw through the piece being hung, but it’s still required to prevent prying forces on the wedged hanger cleats, as mentioned above. Sometimes, you may have to attach your spacer to the wall instead. You can also use a second French cleat in place of the spacer; whatever best suits the situation.

In most cases, the spacer will be hidden from view once hung. However, this one extends below the bottom shelf. If you’re not hanging the bookshelf, you obviously don’t need this part – or the French cleat itself (Thanks for stopping by anyway!). But, you know, I am. And I do. And it will be visible, so it needs to match the rest of the bookshelf.

To attach the spacer, I first drilled pocket holes at the ends of it (on the wall-facing side). Then I put glue in the dadoes and coated the ends of the plywood before tapping the spacer into place and securing it with pocket screws. Finally, I drilled pilot holes and counter-sunk for screws into the bottom shelf. It definitely isn’t coming apart!

My cleats and spacer are all cut from 3/4” plywood. Both fit into the shelf dadoes for super solid construction. This isn’t a necessary feature, but the cleat is what will support all the weight (eventually, the spacer will help as well). So make sure they are strong and firmly attached.

The French cleat on the back of the bookshelf and its mate that screws to the wall are cut from a single piece of plywood. Cut the piece to length and – if you’re fitting them into dadoes, as I am – shape the ends as necessary. The width should be sufficient to accommodate both cleats and the 45° bevel, while leaving plenty of meat for your screws (for heavy units, like this one, you may want two screws per stud).

The French Cleat – An Atomic Wedgie For Your Wall

Having always resided somewhere along the “nerd – dork” axis (though it’s debatable which end I favor), I somehow managed to elude the proverbial schoolyard wedgie – thus far. Conversely, the walls of my home and shop have been fortunate enough to have received wedgies, in the form of French cleats. I’m no bully; I just prefer my heavy, bulky objects full of smaller objects to not crash down onto the floor.

One thing to keep in mind is that your French cleat should span at least two wall studs. In a garage or workshop with OSB or plywood walls, you can make exceptions. But drywall anchors can only be trusted to support so much weight. This bookshelf will be hung on drywall; so studs are a must. The problem is, the stud locations don’t align favorably with the desk above which the shelf will go.

To get the exact positioning I wanted, I had to hang the bookshelf a little off center (with respect to the wall studs). So the wall cleat was trimmed a bit shorter and mounted a few inches off center. And since the cleat was shortened, I had some wiggle room to slide the bookshelf yet another inch or so as needed. The total offset isn’t too extreme and the majority of the weight is still well between the studs. The mounting is safe and life is good.

Taquet Français – That’s “French Cleat” In French (According To Google)

Level and secure the wall cleat with 2-1/2” or 3” wood screws into studs. Drywall anchors may not by adequate for heavy objects. If you have plywood or OSB sheathing, you can likely get away with hanging it whenever you want – maybe use a few extra screws. But still hit studs if you can.

Finally, Screw The Spacer Cleat To The Wall

After screwing the spacer to the wall, I painted the screw heads to match the rest of the bookshelf.

So there you have it! French cleats are an incredibly easy and reliable mounting method. And providing your wall is reasonably straight – not bowed or wavy – they can be an excellent option for things you’d have a hard time hanging any other way. (Such as cabinetry. Just remember that they have to be lifted onto the cleat. So leave enough clearance at the ceiling! You can hide the resulting gap with moulding.) You could say they’re the “creme brulee” of the crop!

With another successful project in the books, I think I’ll settle in with a bag of chips and a big bowl of Lipton’s famous French onion dip. Wait, what? It’s actually “California dip”? Sigh, I give up. You can see yourself out. Au revoir!