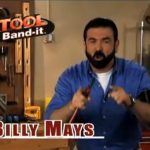 A couple weeks ago, we compiled a treasure trove of funny tool commercials for your viewing pleasure. One of our fellow tool bloggers suggested privately that maybe we were too kind in our coverage. Unbeknownst to him, we had already started crafting the sequel to that post, which we now bring to you as Funny Tool Commercials That Suck! Before we dive into these videos, a couple disclaimers.

The tool commercials shown below come in three categories:

So just because you see your favorite tool on here doesn’t mean we think it sucks. . . unless we say it does. Even when we say it sucks, it’s strictly our opinion, largely informed by what our well-trained, tool-discerning eyes gleaned from these commercials. But when it’s all said and done, it’s just one man’s opinion, so please either hold off on the hate mail, or post your hate mail in the comments field below for everyone’s entertainment. With that said, let’s proceed!

Billy Mays Tribute:
Sometimes tool promos are funny simply because they’re for completely lame products. Case in point, the Tool Band-It. Get it? It’s like a “bandit” that steals tools, but it’s also a “band” you can apply to your arm to make yourself look like the world’s dorkiest DIY’r. RIP Billy, but we think this one sucks.

The Not So Wonderous Wonderclaw:
The acting at the start of this is divine! It’s like a little compilation of the worlds most uncoordinated gardeners. One man is unable to get leaves into a trash can. A woman topples over after. . . pulling a small weed. It then shows the tool grabbing onto “large clumps of leaves.” Apparently they define five leaves as a “large clump.” They then show people picking up leaves and grass with it, which appears comparable to emptying a swimming pool with a teaspoon. We have to give this one a double-suck rating, both the commercial and the tool appear awful.

Sucky Foreign Commercial, “Telesteps, great for French burglars”:
We have several issues with this commercial: 1) We’re not sure it’s a commercial 2) It’s french 3) Their demonstrator appears to be a burglar 4) The commercial is like a how-to for burglary or possibly voyeurism 5) Quite possibly the worst soundtrack ever, there’s no music! We rate this one a singular suck. The ladder looks like a potentially useful product, but the commercial really, really sucks.

When They Called It The “Flex-o-ladder”, They Meant It:
If you haven’t seen this pitch, you’re in for a treat. For those of us that might harbor a cruel secret hatred of home shopping salespeople, this video brings a special sort of Schadenfreude. Within 5 seconds of watching this you’ll quickly get the sense the sales guy has absolutely no clue how the product works. What gets me is that after the ladder starts to buckle, he keeps charging ahead. Most people would let common sense intervene at that point, but not him. He charges onward, even proclaiming “now it’s locked.” In what is quite possibly the least sincere pathetic sales line ever, he concludes with, “It is very safe to operate, so, continue to call for it.” I’m pretty sure anyone in the process of calling hung up as quickly as they could. We’re not sure about the ladder, but the commercial definitely sucked. We’ll give this a one and 3/4 suck rating.

Harbor Freight – No Dude, That’s Not a Map:
We’ve talked about the controversial, yet strangely intriguing Harbor Freight tool stores before on HomeFixated. Whatever you may think about their tools, we think this commercial completely sucks. Hey cocky guy. . . that’s not a map. . . it’s a piece of paper with “Harbor Freight” written on it, along with an arrow. Maps are typically a little more descriptive. If you need to write the name of the store along with a big arrow to remind you where you’re going, you’ve got more issues than where you shop for tools.

Swiss Army, Please Tell Me You Can Do Better Than This:
C’mon Victorinox, you’re Swiss. You’re clever. Showing some plane-wrecked guy acting like an Orangutan just isn’t doing it for me. Plus, most people use folding knives, or leatherman tools or SOG Multi-Tools, not Swiss Army knives. You’re going to need to come up with a concept a little more compelling than “Orangutan’s and plane-wrecked people like our tools.” Sucky commercial, but a great tool, or, at least it was in the 80’s.

If you’ve got any other favorite sucky tool commercials, please let us know in the comments field below. Happy shopping!