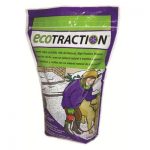 While I like a lot of naturally salty things (pickles, olives, Simon Cowell), I’m not big on adding salt to my food. Maybe it’s because I overloaded on salty things (like bacon) during a recent experiment or maybe it’s just because I happen to know it’s not really good for me.

It turns out too much added salt isn’t the greatest for roads, ground, grass, water and infrastructure either. Salt is a very common way people melt ice and remove snow in the winter – it’s cheap, effective and easy (provided you’re using it at the right temperature).  In 2008, more than 21 million tons of road salt was used in the U.S., with chemicals running off into vegetation, soil and waterways, affecting plant growth and animal habitats. In addition to the environmental impact, the National Research Council Transportation Board estimates that every ton of road salt costs $600 in downstream infrastructure damage (This study was done in 1991. If we were to adjust for inflation, this would work out to $900 in damage). Now there’s a company out there that has an alternative – one that doesn’t just prevent damage, but can actually help things flourish in the spring.

EcoTraction is a salt substitute (for outdoors, not your plate!) that is made up of volcanic material. Unlike salt, it does not melt snow or ice, rather, it embeds itself in it, providing people and vehicle much-needed traction when walking or driving over the slippery surfaces. This embedding and the surface style of EcoTraction also make it superior to sand or cat litter (another option for folks hoping to avoid a slippery winter). It will also give you a much-needed boost should your car get stuck in the snow. Take a look at this video to see that in action:

After the snow melts and you have EcoTraction pebbles left on your sidewalk, you can actually sweep it up and use it in a number of applications such as soaking up minor oil spills in the garage, as cat litter, as a deodorizer, in your potted plants, garden or lawns (it releases minerals and nutrients plants use!), or as a slug repellent.  EcoTraction is like the Swiss Army knives of minerals!

will set you back about $25 on Amazon. Also available at a number of big box and local retailers.