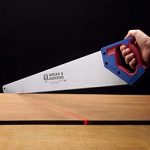 I’ve never claimed to be much of a woodworker – I tend to stick to the most simple of tasks. Even then, there’s no guarantee of success. Making a straight cut with a hand saw can even be an achievement. My failure rate is usually attributed to two things: One, being distracted by the TV during mid-saw stroke (who among us has not been drawn into the deep conversations held by the characters on The Hills?), and two, I sometimes inadvertently tilt the angle mid-project.

While it can’t really help me with my first issue, Spear & Jackson’s Laser Guided Saw can ensure you’re on track at any point in the project.

The concept is simple. Mark your board (or not – this frees you up somewhat), start your cut and at any time and press the laser button. A red laser line will show you exactly where the cut is going to go based on your current grip and angle. If you’re off, just tilt the blade where it should be and carry on. You can do this as often as you like during your job to ensure everything’s straight and on target. The saw itself features a 21” rigid blade.

There’s a video of the laser guided saw in action. If you’re convinced it’s for you, Garret Wade offers the Spear & Jackson Guided Saw for $39.95.